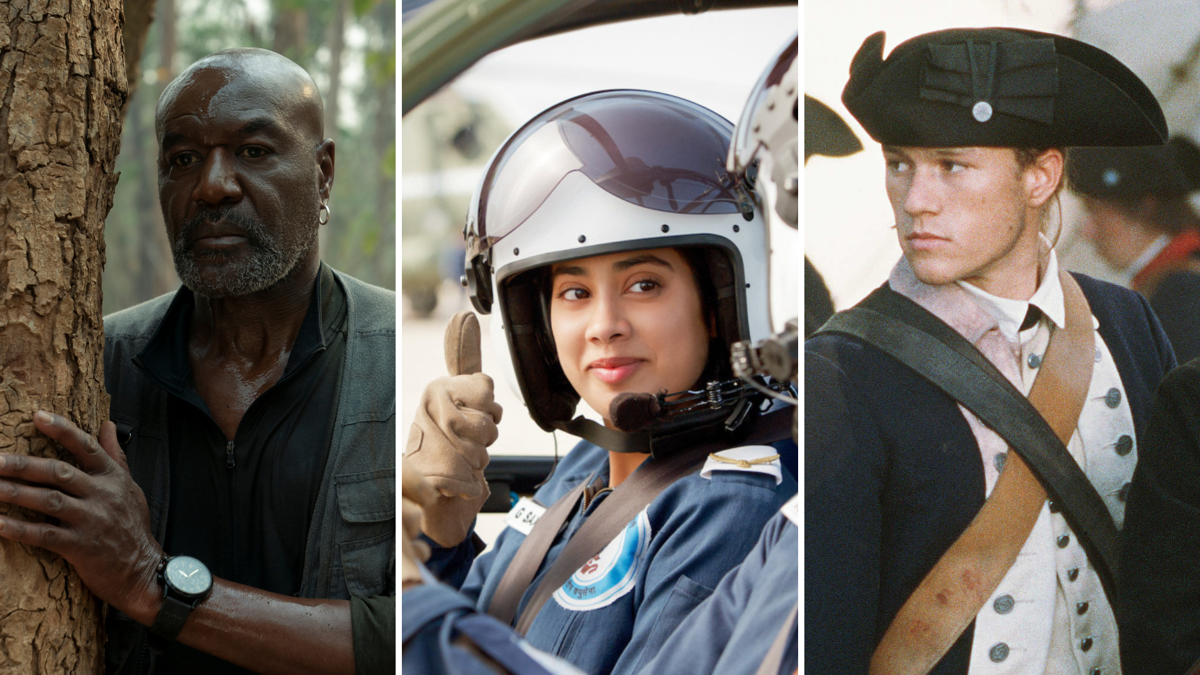 When the times get tough, the tough get going. Perhaps that’s why it’s such a heart-pounding pleasure to watch war moviesda. In these films, we witness not only brutal battles but also the bravery and resilience of heroes and survivors. Their stories might be steeped in tragedy, violence, and horror, but nonetheless, they rally to fight back.

Whether set on foreign shores or many years ago, these war stories hit home with characters’ journeys powerful and profound. If you’re looking for something thrilling, heart-wrenching, inspirational, or even hilarious, we’ve got you covered.

Here are the top 10 war movies on Netflix streaming now.

Spike Lee directs this riveting Vietnam War drama, which swings between past and present. Delroy Lindo, Norm Lewis, Clarke Peters, Isiah Whitlock Jr., and the late Chadwick Boseman star as the titular quintet, who buries gold bars while serving overseas in the Army. Decades later, they return to Vietnam, not only for the treasure, but also to bring back the remains of one they lost. Along the way, they’ll run into shady characters, familial conflict, and explosive twists. Jonathan Majors, Mélanie Thierry, Paul Walter Hauser, and Jean Reno co-star in this critically heralded 2020 release.

How to watch: Da 5 Bloods is streaming on Netflix.

Sharan Sharma directs this heartwarming biopic, which focuses on a glass-ceiling shattering heroine of the Kargil War of 1999. From a young age, Gunjan Saxena (Janhvi Kapoor) dreamed of flying the skies as a pilot, but the path for women in India to achieve this dream had not been fully charted. She faced doubters, derision, and blatant sexism as she climbed the ranks in the Air Force, finally making history as the first female officer of the Indian Air Force to fly in a combat zone. With earnest drama and a bouncy soundtrack, this 2020 Netflix original takes audiences through her inspirational story and into the battles between the Indian and Pakistani forces.

How to watch: Gunjan Saxena: The Kargil Girl is streaming on Netflix.

Following Independence Day and Godzilla, action-auteur Roland Emmerich teamed with Braveheart‘s Mel Gibson for an American Revolutionary War epic. Gibson and Heath Ledger star as a father and son who join forces with the Continental Army to overthrow the merciless British, in particular, a cruel colonel played by Jason Isaac. Loaded with sweeping battleground sequences, history-inspired heroics, and moving moments of melodrama, The Patriot packs a punch.

How to watch: The Patriot is streaming on Netflix.

Celebrated for his gritty dramas The Rover and Animal Kingdom, Australian writer-director David Michôd threw critics for a loop with his dark 2017 satire, based on Michael Hasting’s non-fiction book The Operators: The Wild and Terrifying Inside Story of America’s War in Afghanistan. Brad Pitt stars as a bombastic general, charged with the rebuilding effort in Afghanistan. During his mission, he will face skepticism, scorn, and outright opposition from enemies, allies, and government officials. Funny and thought provoking, this curious comedy also boasts appearances by Anthony Michael Hall, Topher Grace, and LaKeith Stanfield.

How to watch: War Machine is streaming on Netflix.

One of the fascinating films where the production has drawn as much attention as the movie itself, Apocalypse Now was its own war for director Francis Ford Coppola. Filming in the Philippines, he and his crew endured military-related delays, punishing weather, health emergencies, and the recasting of the hero two weeks into shooting. Then, leading man Martin Sheen brought his own demons to the already trouble production. Even achieving the final cut of the 1979 film was a battle. So in 2001, Coppola revisited his Academy Award-winning Vietnam War movie to create a cut closer to his heart of darkness. The result was Apocalypse Now Redux, a director’s cut 20+ years in the making with 49 more minutes of footage.

How to watch: Apocalypse Now Redux is streaming on Netflix.

Often war stories look to the frontlines, but writer/director Sofia Coppola’s 2017 stunner focused on the homefront of the American Civil War. Based on Thomas P. Cullinan’s novel of the same name, The Beguiled centers on a girls school in Virginia, where the unexpected intrusion of a Union soldier spurs feelings of lust, jealousy, and wrath. The grim lesson learned is that the violence of war won’t be contained to the battlefield. Colin Farrell, Nicole Kidman, Kirsten Dunst, and Elle Fanning starred in the slow-burn thriller that wowed critics and earned Coppola the Best Director award out of the prestigious Cannes Film Festival.

How to watch: The Beguiled is streaming on Netflix.

Adapted from the Frank Miller and Lynn Varley comic, Zack Snyder’s 2006 war epic follows the 300-strong contingent of Spartans — led by King Leonidas I (Gerard Butler) — that defended ancient Greece from a Persian invasion, led by King Xerxes (Rodrigo Santoro) in 479 B.C. Both the comic and the movie are based on the real-life Battle of Thermopylae. But in both adaptations, the story is secondary to the presentation.

Snyder’s signature style of artful framing and conscious formal play is splashed across every frame of 300. (Who can forget that famous slow-mo kick?) For all the intense violence, this is a stunningly beautiful film as well as one of the first that nailed the artistic sensibilities of an action-heavy comic book. Snyder may be a controversial fave, but 300 remains one of the most impressive expressions of his innate talents to date. And it makes for a genuinely gripping war movie.—Adam Rosenberg, Senior Entertainment Reporter

How to watch: 300 is streaming on Netflix.

8. Beasts of No Nation

Based on Uzodinma Iweala’s novel of the same name, this war drama explores the horrific plight of child soldiers. Abraham Attah stars as Agu, a young West African boy who is ripped away from his family and conscripted into the militia of a charismatic but demanding Commandant (Idris Elba). To survive, Agu must forge a path of violence and blood, machete first. Written, directed, and shot by Cary Joji Fukunaga, this riveting drama won praise for its powerful storytelling, while Elba scored a Golden Globe nod for his striking portrayal.

How to watch: Beasts of No Nation is streaming on Netflix.

Chris Pine headlines this action-studded biopic about the 14th-century Scottish King who was the underdog in a war against the massive and mighty English forces. Directed by David Mackenzie, this epic drama ushers audiences back to Middle Ages warfare, where chainmail, heavy armor, and swords clashed. Critics lauded the humanity webbed throughout this war film and cheered Pine’s captivating portrayal of a legendary historical figure.

How to watch: Outlaw King is streaming on Netflix.

Stripes is like a funny Full Metal Jacket. The 1981 comedy follows friends and professional losers John Winger (Bill Murray) and Ryan Ziskey (Harold Ramis) as their crumbling adult lives compel them both to enlist. We spend the first half of the movie getting to know Stripes‘ colorful cast of miscreant recruits, including John Candy’s lovable rube, Dewey “Ox” Oxberger. When sent to Italy, the ostensibly-trained band of misfits led by Winger and Ziskey race right up to the brink of an international incident — of their own creation. Hijinks ensue.

Stripes is a classic comedy from the ’80s featuring three legends in Murray, Ramis, and Candy alongside a stellar cast that also includes Warren Oates, John Larroquette, Judge Reinhold, and, in one of his earliest film appearances, Bill Paxton. —A.R.

How to watch: Stripes is streaming on Netflix.

Related Video: What to binge on the best 30-day free trials