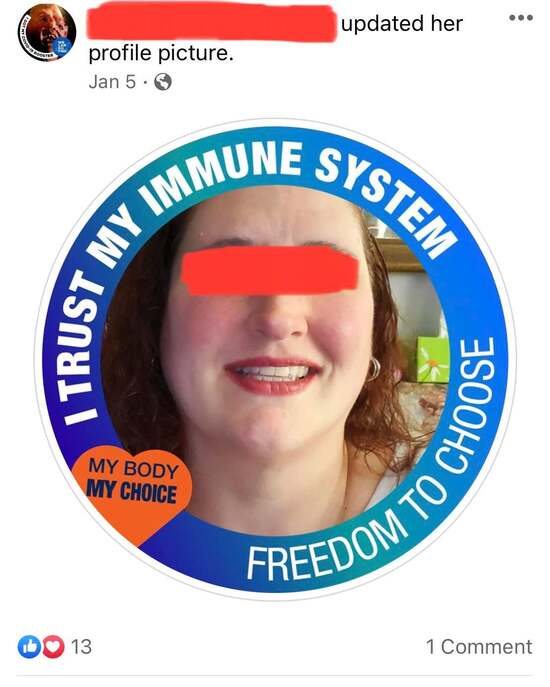 That was her last profile picture update, which is … kinda ironic given where this story is headed.

At this point, everyone has given up on a national mandate. Hopefully big employers will continue to mandate their ranks, but really, the way out of this is to make it harder and harder for the unvaccinated to engage in regular life. No domestic flights. No public transportation. No restaurants. And so on. Some of it the feds can do (transportation), some of it will come down to states. And then we move on as best we can while conservative/Q-nuts accelerate their exit from this world.

Yes, it’s not ideal, and too many good people will die. But this mass psychosis infecting the American (and global) right can only be mitigated, not stemmed.

Weird that they don’t have a meme with a gun on the first frame, and how they don’t need it because Bible.

Hey look, a smart friend trying to save her friend’s life.

Today’s protagonist: Well, I don’t trust it and it’s too fast and I’ll ignore your reasonable science- and evidence-based words to state declaratively that there’s no proof vaccines work.

Oh well, her friend tried. A rational person would think “oh shit, my friend’s dad died of COVID even though he was protected, that’s one serious bug and I should do everything possible to protect myself and my family!” But nope.

KIDS SHOULD NOT WEAR MASKS IN SCHOOL THE CHANCES THEY DIE ARE ALMOST NOTHING.

Oh dear god certain blood types are not immune. She thought she was “immune” because she’s AB blood type, then essentially says, “I think it was my type, or maybe a different type oh well shrug!” SHE DOESN’T EVEN KNOW HER OWN MISINFORMATION. How about maybe confirming that information, so you actually know, instead of just think? Would that kill them? NO! Quite literally the opposite!

But you want to know what’s ironic? It’s O blood types that seem to have some resistance, while AB blood types are more prone to infection according to this meta study.

She literally had it backward!

(To add, some studies find no correlation between blood type and susceptibility to COVID, so it’s still a controversial, unsettled topic. But of the studies that did find correlation, all of them fingered AB as the highest-risk blood type.)

With delta, she would’ve gotten monoclonal antibodies. They just don’t work against omicron.

I don’t want to be the cause of some elderly to die from it, that would be selfish.

THEN WHY DIDN’T YOU FUCKING VACCINATE.

Who knows how long she walked around infecting people before she became symptomatic.

So is she rethinking her opposition to vaccines? Of course not. Those cases are rare. Instead, she doubled down.

I bet this “nurse” wasn’t around for the Spanish flu, so yeah, she’s never seen a pandemic. Very few of us have.

And what kind of “nurse” is shocked that a vaccine would require boosting? Lots of vaccines require boosting, INCLUDING THE FREAKIN’ ANNUAL FLU VACCINE—which also doesn’t grant full immunity!

“Hi, I’m having a hard time with horrible symptoms but a cloth mask is too much to prevent it.”

She literally posted above that it would be selfish to kill someone with her COVID.

She had that one smart friend. She also has the other kind of friend. HEK-293 is a fetal stem cell line from a 1973 abortion used in the creation of myriad drugs. There is a weird conspiracy theory that this stem line appears in Pepsi, apparently.

The claim originates from 2010 when the food and drink company PepsiCo (here) signed a four-year deal with Senomyx (here), a biotechnology company that develops sweeteners (here).

A year later, a US-based anti-abortion group called ‘Children of God for Life’ called for a boycott on companies partnered with Senomyx, which they alleged was using “aborted fetal cell lines to test their products”. They claimed Senomyx was using human embryonic kidney (HEK) cells “taken from an electively aborted baby” to produce human taste receptors. The cells were called HEK-293 (here).

Not only is the notion that HEK-293 appears in food a lie, but why would the government care about fetal cell lines in foods so much that it would keep abortion “going”? And even if HEK-293 were used in the development of foods, why would it require ongoing abortion when the one from 1973 has worked out so well?

I really wish their conspiracies had some internal logic and basic common sense. I wouldn’t lose so much faith in those believing them.

I checked out her friend’s feed. Would you believe she was full of Jesus, “Let’s go Brandon,” and posting homemade recipes for hydroxychloroquine (when fruit peels do not create HCQ)? And she’s already suffered through the disease once!

But that’s why they believe that stuff works. Most people will survive an infection. So these nuts pump themselves up with HCQ and horse dewormer and urine, add a heavy dose of prayers, and then they think that that’s the reason they survived. The very same people who are like “why should I care when 99% survive?” are suddenly convinced that their crackpot solutions were the reason they pulled through.

Woah, 12 days from “it feels just like the flu” to death.

She had a 10-year-old and a kid who just graduated high school who are now left motherless. Dad got out of the hospital as I was writing this, so at least they won’t be orphans.

Infuriating. And at the top of her legacy Facebook page? This:

That’s now her forever picture. What a stupid way to go. What a stupid reminder of her stupid choices. And remember, she publicly blamed her son for infecting her. So now he gets to live with that as well, even though it clearly wasn’t his fault. Fucking awesome job. I hope someone is able to delete that post before he sees it (hoping he hasn’t already).