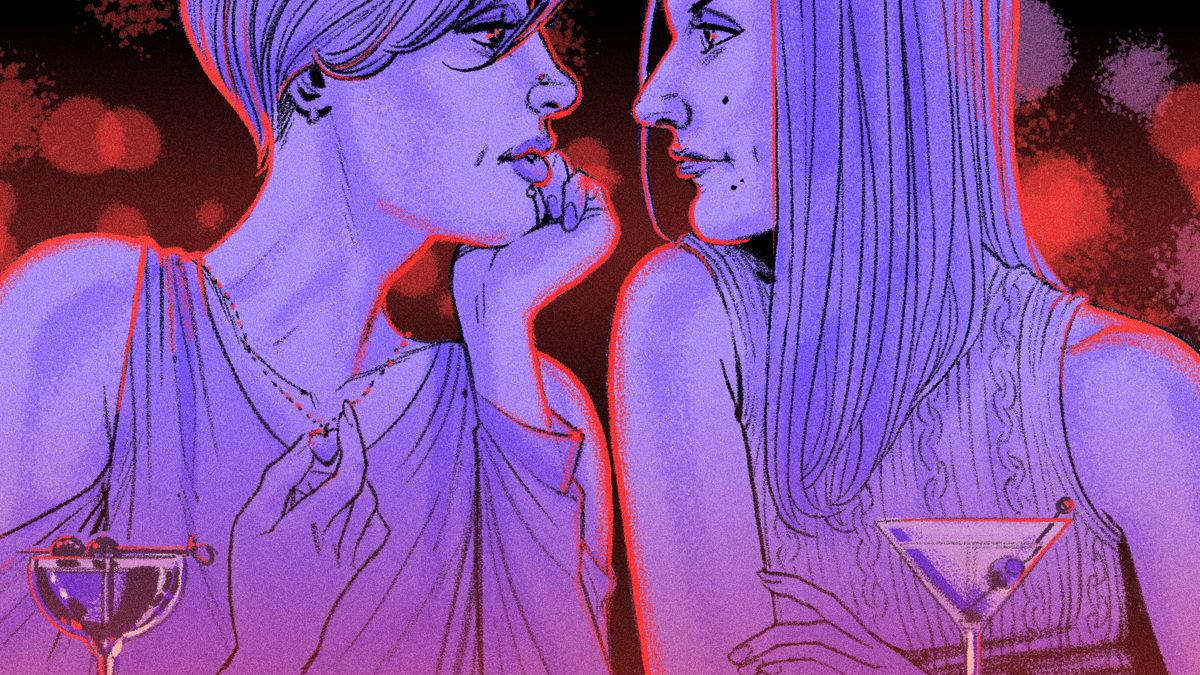 When I was about 11 years old, my obsession with breasts really took on a life of its own. This was the time of the revival of the Bodycon dress, thanks largely to icons like Geri Halliwell in that Union Jack number. Whenever I saw celebrities in magazines or on TV, my eyes would immediately go to their chests and I’d sit and guess their bra size with a kind of salacious glee. Nobody knew what I was thinking and I loved the naughty secrecy of it.

But as well as desperately wanting to squeeze boobs, I also desperately wanted to fit in. I quickly discovered that my peers didn’t care about breasts in the same way, or at least if they did, they kept it a well-hidden secret. Rather, they were fixated, entranced, by dick size, and would gossip endlessly about penises showing through clothes and size being indicative of a person’s bedroom abilities (spoiler alert: it’s not). The conversation bored me to tears, but I wanted so badly to be accepted I forced myself to feign interest.

Thanks in part to having grown up in conservative, straight spaces, it took 35 years for me to realise I actually had the power to identify as queer. I felt relieved but also terrified, thinking I was the only one going through this at my age, until I started connecting with others whose journey was delayed.

Charlotte, who realised she was pansexual at 32, says heteronormative sex ed blocked her realisation of her sexuality. “Sex education was taught from a reproductive/male pleasure centric, so I didn’t really know that you could have sex outside of that, that it wasn’t about sticking a penis in a vagina, that a penis and a vagina didn’t define a man or a woman,” she says. “This is something I’ve learnt myself.”

So, straight me had straight sex and straight relationships with straight men, got married, did the whole straight lifestyle. My attraction to other genders didn’t stop, but I repressed it. As time went on, it became harder to ignore the fact that I didn’t really like that many men that much — especially the straight ones. Everything I said and did was deemed too controversial for them and they would tell me I was “too much to handle.” Over time and subconsciously, I accumulated many queer friends and loved being in community with them where I often felt much more understood, accepted, and even celebrated.

Earlier this year, I finally realised my queerness wasn’t something that was going to be handed to me, I had to own it. And I had to make peace with the fact that it had taken me so long to realise that.

David told me their lightbulb moment occurred when they went to Pride, aged 48. “That moment was the catalyst, the moment those musings manifested themselves for me. I felt so at home, so comfortable, in a way I hadn’t in 25 years.” They worried about the reaction people would have at someone coming out in their 40s. “I feared people who’d known me years would mock, not understand, think it wasn’t real, but largely everyone’s been great.”

There is, of course, the stumbling block many of us experience, the feeling we don’t have enough ‘evidence’ we are anything but straight. Attraction is one thing, but how could we really know for sure unless and until we have actually had intimate experiences with people of other genders? And how could we possibly expect anyone to be a test for us to affirm ourselves?

Peach, who came out at 41, said they feel they know how to date men, but women are another ballgame entirely. “With women, I hold myself to a higher standard,” they say. “I don’t want to mess them about or for them to feel like I am using them to experiment so I hold back. I’m still scared of putting myself out there, and you would think having a vulva would mean I’m confident but actually I’m terrified of not being any good in the bedroom (or wherever). I think that’s also holding me back.”

Amy came out to her friends when she was 37, but struggles to meet other women. “I guess now I’m scared of not being gay enough,” she says. “I’m ethically non-monogamous with a male partner and find it really hard to meet women. There’s so much stigma in my head about bisexual people being ‘greedy’ or ‘indecisive.'”

Heteronormativity is entrenched in every facet of society. We shouldn’t need case studies to prove who we are, we aren’t defined by our relationship back catalogue, we are defined by how we feel, whether that’s straight, queer, bi, pan, aromantic, asexual, ace, gay, a mix of those, something else, or nothing else at all. It has been so empowering talking to so many other people who realised their sexuality in their 30s and 40s and it’s really made me see that the idea of a cut-off age, that I’m just ‘too late’ is a myth. I’m excited to live the remainder of my time in this world knowing exactly who I am.

And boy, do I intend to live it.