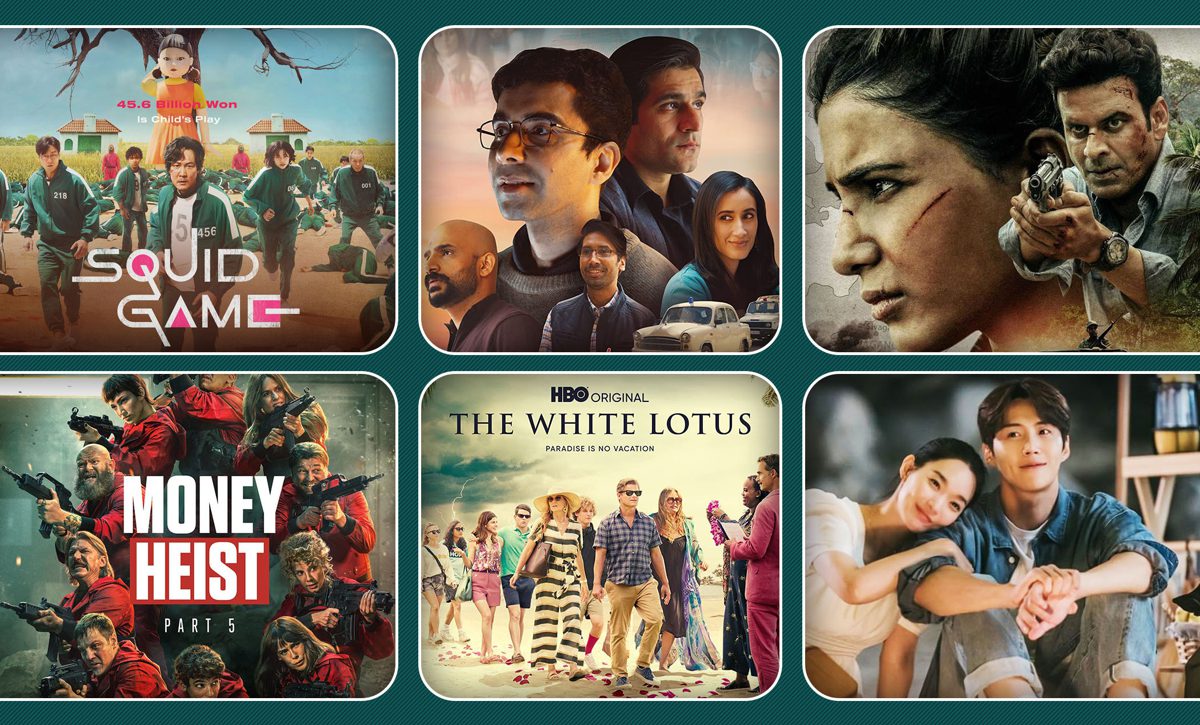 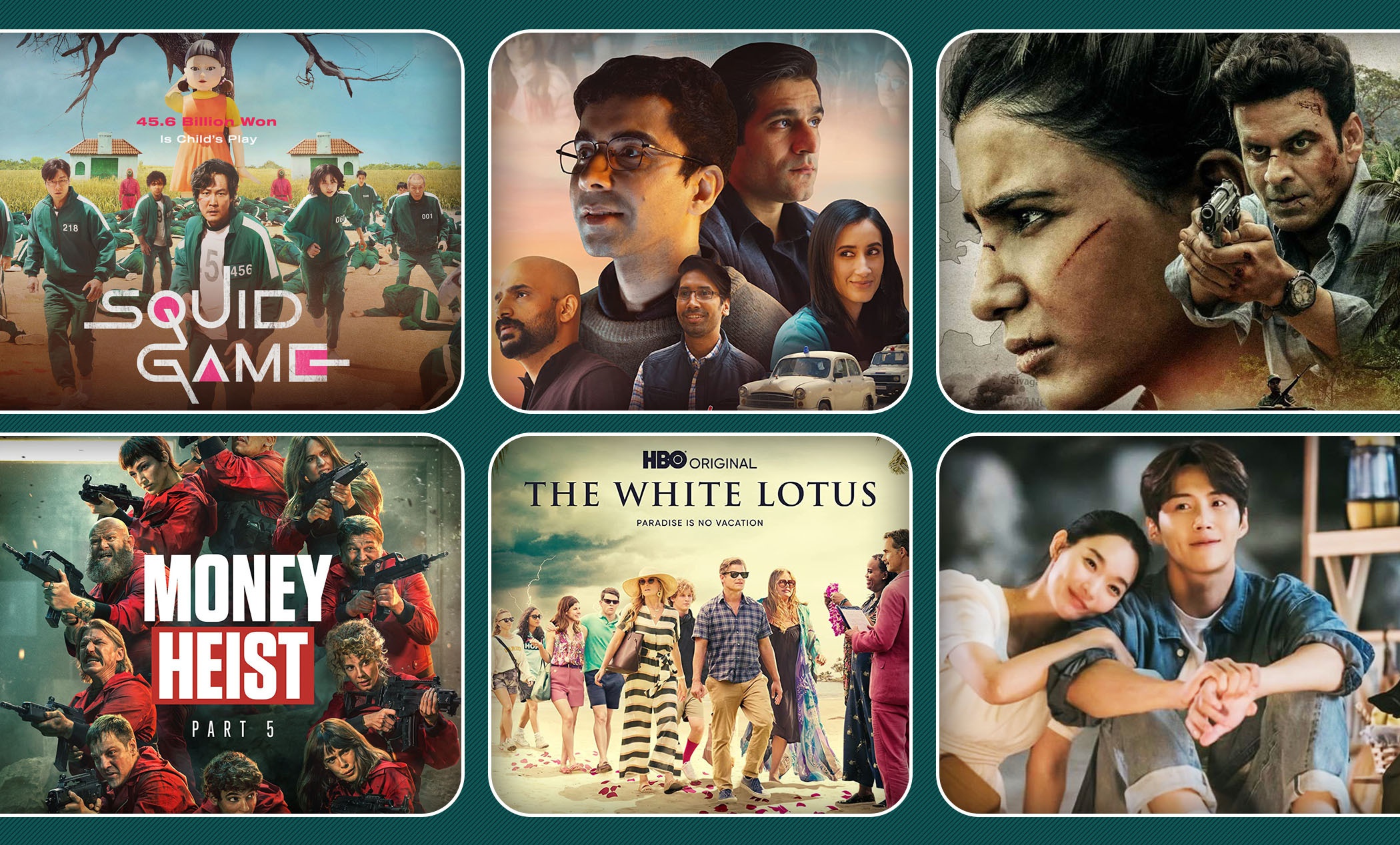 If compared, 2021 was a better year for entertainment as artists and crew returned to the sets, and things started rolling back to normalcy once again after months of lockdown. And with cinema halls remaining closed, digital platforms like Disney+, Netflix, Amazon Prime and others became the prime source of entertainment for all.

Given the long list and variety of shows/movies already available on these OTT platforms, things started getting more competitive with a string of new web series releasing on respective platforms. While Netflix hit the jackpot with Korean drama ‘Squid Game’, Disney+ came out with a couple of new Marvel web series like ‘Loki’, ‘WandaVision’, ‘What If…? and others. And the solid popularity gained by Indian shows like ‘Aspirants’, ‘The Family Man 2’ and others, added a great range of options to the ones existing in the pool.

As 2021 comes to an end, here’s a look at the best web series/shows that kept us entertained and safe at home.

Netflix’s survival drama ‘Squid Game’ left the audience stunned. While the gripping storyline and brilliant narrative of the K-drama kept the audience on the edge of their seats, Hwang Dong-hyuk’s entertaining drama went on to become the giant online streaming platform’s ‘biggest series launch’ within no time.

Created by Arunabh Kumar and Shreyansh Pandey, the coming-of-age web series, ‘Aspirants’ went on to a rating of 9.7 on IMDb. With talented young actors like Naveen Kasturia, Namita Dubey, Shivankit Singh Parihar, Abhilash Thapliyal and Sunny Hinduja headlining the show, ‘Aspirants’ is an entertaining show that revolves around friendship and ambition. If you haven’t watched it yet, then you can still catch all the action on TVF’s YouTube Channel and TVF Play.

Hailed as one of the best shows of 2021, Kate Winslet’s crime drama titled ‘Mare Of Easttown’ helmed by Craig Zobel is a treat for all her fans. Apart from delivering a breathtaking performance, Winslet once again weaved her magic in front of the camera and took home several prestigious accolades.

After the phenomenal success of the first season, the makers of The Family Man came back with a stronger and bigger cast and gripping narrative. While Manoj Bajpayee continued to impress in his Srikant Tiwari avatar, it was South sensation Samantha Ruth Prabhu menacing act that stole the thunder.

While ‘Avengers: Endgame’ marked the end of Marvel’s dominance in the superhero genre, the giant studio shifted its focus onto OTT platforms with Elizabeth Olsen (Wanda Maximoff/Scarlet Witch) and Paul Bettany (Vision) reprising their characters from the previous Marvel outings. The first project of Marvel’s Phase 4, ‘WandaVision’ managed to strike a chord with the audience.

Post the enormous success of ‘WandaVision’, Marvel encountered an unexpected setback with ‘The Falcon and the Winter Soldier’, and in an attempt to overcome it Marvel played their trump card ‘Loki’. Tom Hiddleston’s mischievous character enjoys a huge fan following and given Loki’s past, the Michael Waldron series churned out yet another enthralling joyride for MCU fandom.

Given the massive popularity of Marvel superheroes and their stories, Marvel introduced their fans to a whole new world of fan-theories ‘What If…?’. The web series features alternate timelines of various events exploring different storylines. While the first season of the nine-episode series garnered a lot of positive reviews, the makers are all set to come out with the second season in 2022.

Alex Pina’s Spanish crime drama ‘Money Heist’ has been the talk of the town for the past two years. And with the bar set real high for the finale, the makers surely matched the expectations. While the plot twists kept the audience on the edge of their seats, Berlin’s parallel storyline just added another layer of complexity to the already exciting plot.

One of the most-talked and loved K-drama ‘Hometown Cha-Cha-Cha’ starring Shin Min-a and Kim Seon-ho is one show that you just can’t miss. Set in a small seaside town of Gongjin, the show manages to deal with complex issues like mental health with great sensitivity. And with Korean dramas gaining popularity in the international circuit, you can surely get over the language barrier with the help of subtitles available on Netflix.

With schools and other professional institutions switching to online classes and programs amid the pandemic, TVF returned with yet another season of Kota Factory. Diving deep into the world of IIT aspirants, the second season of the popular series revolves around the lives of Indian students, who aim to secure admission to the country’s top IIT colleges. The show is currently available on Netflix.

The latest season of HBO’s ‘Succession’ created by Jesse Armstrong revolves around the Roy clan. Apart from the uber-rich characters and strong performances by lead actors, what makes this show an instant hit with many is its gripping storyline and twisted plots. And with actors like Brian Cox, Sarah Snook, Jeremy Strong and Matthew MacFyden bringing their respective characters to life, the show continues to entertain the audience.

A satirical comedy-drama created by Mike White, HBO’s The White Lotus which is now also available on Disney+Hotstar. The series revolves around the lives of a group of vacationers as well as the hotel employees, who encounter a series of complexities that only get worse with each day. The enormous success of the show motivated the makers to come up with an anthology series.

Created by Shreyansh Pandey, ‘Gullak’ is an Indian series that managed to strike a chord with the audience. With the second season managing to maintain the feel-good slice-of-life essence of the show, it’s an entertaining desi-story revolving around an Indian family streaming live on Sony LIV.

Jason Sudeikis returned with the second season of ‘Ted Lasso’ which follows the life of the titular character, a football coach essayed by Sudeikis himself. While the latest season wasn’t quite on a par with the first one, Sudeikis entertaining performances is enough a reason to get an Apple TV subscription.

SEE ALSO: Breakthrough Actors Of 2021: Vicky Kaushal, Adarsh Gourav And Others Who Left Us Impressed With Their Stellar Acts