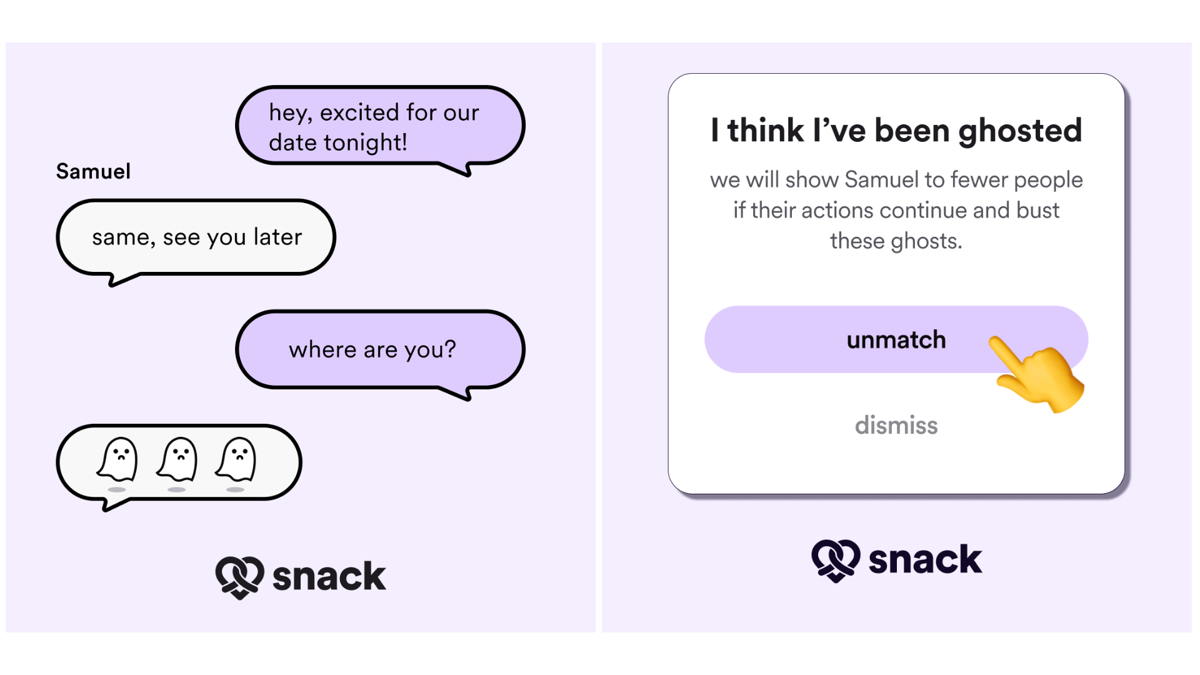 Modern dating is in its flop era. Intimacy is dead, daters are burned out after two years of swiping, and apps introduced a decade ago are starting to show their age. A new app, Snack, wants you to break up with photo-based dating apps. And while it’s designed with Gen Z in mind, it may also be a godsend for millennials who are tired of swiping to find love.

Snack CEO Kim Kaplan knows dating: She spent 10 years optimizing marketing, revenue, and product strategies at Canadian dating site Plenty of Fish. Pre-pandemic, she started thinking about building a video-based app after discovering #singletok, where TikTok users post personal info like their name, age, and zodiac sign to attract potential dates. With the help of a syndicate of Gen Z investors, Kaplan and her team built Snack by asking, “If we were to strip away all the things [about dating apps] that you don’t like, what would that look like from a social and dating experience?”

And Snack really does strip it all away. My profile showed my name, age, location, a few hashtagged interests, and my videos — that’s it. There’s no bio or basic info like education level, job, political leanings, and height. Video prompts like “show me how tall you are by comparing yourself to another object in your room” are designed to capture your info and interests instead. Then the algorithm goes to work, identifying video elements, like “skiing,” “dogs,” and, yes, “fishing,” to learn what you like and to surface more compatible matches.

As a young-ish millennial used to swiping apps, Snack’s simple design broke my brain (the app is currently available for daters aged 18 to 35, so it’s definitely not just for Gen Z). It felt casual, fresh, and really fun, like flipping through my For You Page. You can flick up and down your feed to revisit profiles you’ve already seen and tell someone you’re into them by tapping a heart button. Try swiping right or left, and the app will cheekily remind you that “swiping is old af.” After a few days on Snack, Bumble and Hinge started to look more like resumes than dating apps.

And the video element definitely worked for me. After watching a guy I’d usually swipe left on boldly twerk upside down on a wall at a house party, I thought, “Yeah, I’d grab coffee with him.”

Kaplan says that’s the point: Watching a video, even for a few seconds, forces you to be “more intentional about the decisions you’re making” versus the “low intent” of swiping on a photo. Curated photos get stale fast, especially for Gen Zers who constantly update their feeds and share their experiences, or move dating app conversations to Instagram, where they “flirt through the content that they post,” says Kaplan. “Why wouldn’t you just keep uploading what happened on a weekend or a night out with your friends or what you’re studying?” That type of content says more about who they are than a few old pictures. “You’re seeing a more authentic version of somebody,” Kaplan explains. “[They’re saying] here’s who I am and I’m proud of who I am, and you’re gonna like me for who I am.”

Another element of online dating that Snack wants to see dead and buried? Ghosting.

Letting a conversation die when it fizzles, abandoning apps when life gets super busy— Kaplan says that kind of “light ghosting” is super common and not a big deal to most daters. But when it comes to chronic ghosting “that actually impacts people, it creates a really negative experience for everybody else on the app.” Snack has decided to try to weed out those folks. “If you continually ghost, we’re not going to show you as frequently,” Kaplan says. “Hopefully, that changes the behavior and gets people to be more open and honest with the other party about what’s going on.”

She points to last week’s West Elm Caleb uproar, noting that Snack would have kept a lot of the women involved from ever seeing Caleb on the app.

The goal for Snack is, “How do we make it easier for you to enjoy and laugh and engage with what people are doing [on a dating app], just like you would on TikTok?” Kaplan says. After all, “Dating is meant to be fun, right?”