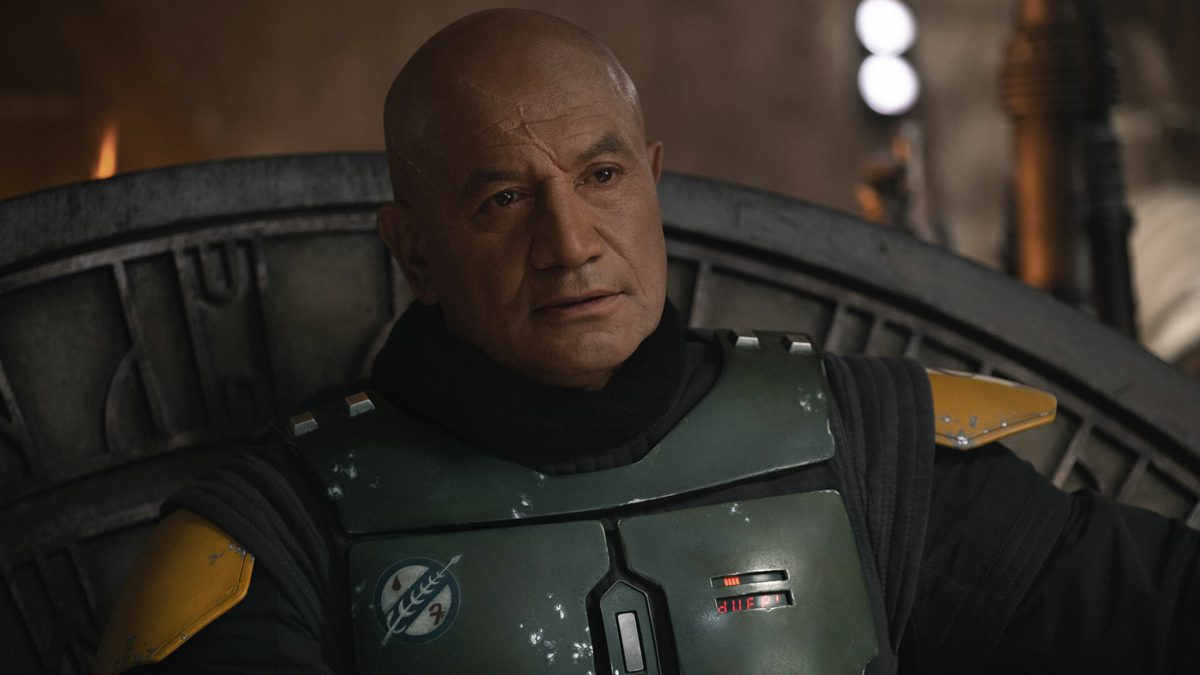 They’re identified as one of the native sentient species of Tatooine who first appear in A New Hope, where they attack Luke Skywalker for no reason until Obi-Wan scares them away with dragon noises. In Attack of the Clones they raid the Lars farm, kill Shmi Skywalker, and experience a little Dark Side genocide at the hands of Anakin Skywalker, and that’s pretty much it.

They’re faceless indigenous stereotypes, introduced as senselessly violent. While not deserving of Anakin’s slaughter, they’re considered disposable enough for a Galactic senator — Luke and Leia’s mom! — to have zero problems marrying a guy who admits to killing “every single one of them…the women and children too.”

Season 2 of The Mandalorian reintroduced the Tusken Raiders with a little more humanity. For the first time, they communicate cross-species with sign language and are shown to coordinate with Tatooine settlers to take down a Krayt dragon. They also have a more specific and understandable role in Tatooine’s cultural history as an indigenous people fighting off colonizers who steal the planet’s resources.

Paramount among those resources is water, which puts the Tusken raid on the Lars moisture farm into an awkward new context. The Book of Boba Fett continues the narrative of Tusken oppression by having Boba lead them a pyrrhic victory against the supply trains that run through their land before they get slaughtered again.

Boba’s time with the Tuskens ties into their original role as Western “savage” stand-ins. The Hollywood trope wherein a lone outsider is captured by a maligned indigenous group before proving himself worthy of tribal acceptance has been done hundreds of times in modern storytelling — Dances With Wolves, Fern Gully, Avatar, Lawrence of Arabia, you name it — and it’s historically associated with white savior nonsense that should have stayed in the 20th century.

The Hollywood trope wherein a lone outsider is captured by a maligned indigenous group before proving himself worthy of tribal acceptance has been done hundreds of times in modern storytelling.

Even though the original Star Wars (and many of its predecessor projects) are heavily influenced by traditional Westerns, repeating that particular pattern with Boba Fett and the Tusken Raiders is either a huge red flag or a signal that The Book of Boba Fett is laying some groundwork for a further subversion of the trope.

The looming question behind all of The Book of Boba Fett is simple: Why did Boba Fett want to take over Jabba/Bib Fortuna’s crime syndicate? Episode 4, which takes place long after the Boba’s Tusken allies were murdered, offers the thin answer that he’s “tired of working for idiots who are going to get me killed.”

That seems reasonable, except for the fact that there are a million jobs between “bounty hunter” and “Space Godfather” that don’t involve working for idiots. Taking over a criminal operation’s turf is a huge undertaking, and so is going to war with the Pyke syndicate over a territory that didn’t have to be Boba’s problem in the first place.

In his Episode 4 flashback, Boba’s first order of business after getting his ship back is raining hell from the sky upon the bike gangs that terrorized his Tusken allies. Revenge is clearly something Boba Fett is comfortable with, but taking out one gang isn’t exactly tit-for-tat with the centuries of Tatooine colonization that made the Tuskens vulnerable to multiple genocides in the first place. What if Boba Fett’s desire to take power on Tatooine and take down the Pyke Syndicate isn’t necessarily for the good of the planet, but a further step in a plan to reshape Tatooine for the people who’ve been fighting planetary outsiders for generations?

Through the Book of Boba Fett, Boba has been shown to reject most of the trappings of gatra leadership (“gatra” is Star Wars’ way of saying “a gang’s turf”) in favor of an unadorned path towards war. It’s almost like he doesn’t want to be seen as having any specific claim to the territory and is working on a longer game — perhaps a game where he cleans up colonizing forces on Tatooine and hands the power to someone else when he’s done. Someone or a group of someones, who had a claim on the land from back when Tatooine was an ocean.

This isn’t to say that The Book of Boba Fett is going to rewrite Star Wars history and make Tusken Raiders a force for good in the galaxy. Cultural relativism aside, murder and raiding is unanimously bad and it’s clear that some Tusken offshoot clans shouldn’t be left in charge of an Arby’s, let alone a planet. It’s also clear that Star Wars is a universe where people blow up planets every other movie or so, grow human children in a lab to use as cannon fodder, and put a collection of sex-starved wizards in charge of galactic peacekeeping.

Just saying, the Tuskens didn’t do anything Kylo Ren didn’t, and even he got a redemption arc.

It is possible that The Book of Boba Fett is willing to make a statement about the gray areas between colonization and retaliatory violence, as well as the moral imperative to repatriate ancestral ownership and avoid perpetuating indigenous narrative stereotyping. That, or Boba Fett has secretly been jonesing after Jabba’s throne for years and just kind of wants it. Either way, the next few episodes of The Book of Boba Fett will be crucial to finding out just how far Star Wars is willing to break away from the original trilogy’s Western roots.

The Book of Boba Fett is streaming on Disney+.