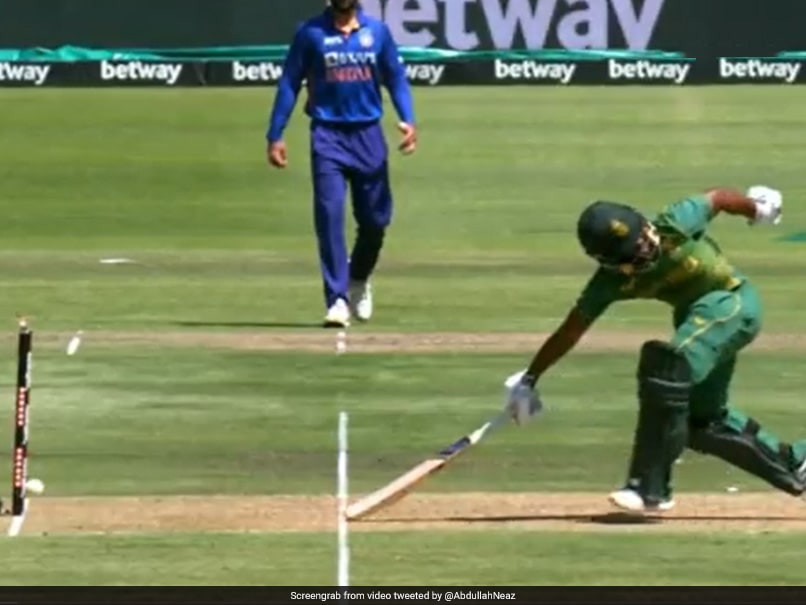 With pride at stake, India made a brilliant start in the third ODI against South Africa in Cape Town on Sunday. The Proteas lead 2-0 in the three-match series and the visitors will be aiming to prevent a clean sweep. After winning the toss, stand-in captain KL Rahul elected to bowl and the hosts’ top-order didn’t fare well, with the likes of Janneman Malan, Temba Bavuma and Aiden Markram losing their wickets cheaply. Skipper Bavuma was dismissed by a stunning direct hit by Rahul and fans took to social media to hail the 29-year-old’s effort. Receiving a full delivery from Chahar in the seventh over, Bavuma sent it to the right of mid-off and left for a single. But instead of running in a straight line, he angled his run to his left after crossing the bowler and Rahul attacked the ball well, throwing an accurate direct hit at the bowler’s end.

Here is the video of Rahul’s direct hit:

Bavuma could only muster eight runs off 12 deliveries.

Meanwhile, Chahar has been in excellent form and has registered the dismissals of Malan, Bavuma and Markram.

After losing the Test series 1-2, India have once again faltered in the white-ball series with regular captain Rohit Sharma ruled out due to his ongoing recovery from an injury.

In his absence, Rahul hasn’t been able to lead India to wins in the first and second ODIs. The series has also seen Virat Kohli perform strictly as a batter and not as skipper.

He had also stepped down as T20I captain after last year’s T20 World Cup. He was subsequently replaced by Rohit Sharma as India’s full-time white-ball skipper.