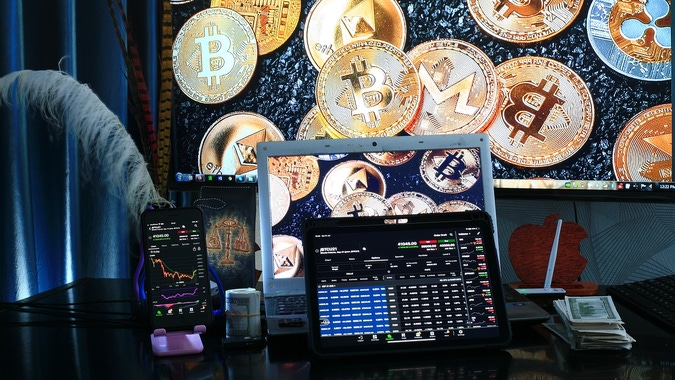 The COVID-19 pandemic caused a shift in how remittances flowed around the world, no more so than in developing countries. This coupled with the existing pull towards cryptocurrency has changed the face of the remittance industry in these nations, writes Kate Anderson.

Global remittances fell in the face of COVID-19-induced lockdowns. But much like other financial services, the sector had to adapt to ensure a steady flow of remittances, resulting in a decline that was much smaller than previously projected. Low- and middle-income countries received $540 billion in 2020, just $8 billion less than in 2019. One of the key changes was a shift in flows from cash to digital, and from informal to formal channels.

But while the pandemic bolstered the trend towards using different mediums for remittances, the use of cryptocurrencies in developing countries is not anything new. The reports that El Salvador adopted Bitcoin as legal tender dominated headlines this year. Elsewhere, other countries also turned to cryptocurrency as a way to hedge against high inflation or combat a weak local currency. Cryptocurrency is becoming increasingly popular in Venezuela and Cuba, where both countries have been impacted by US sanctions.

The potential benefit of using cryptocurrency for remittances is that it means the sender can avoid some of the high costs charged by traditional banks and money transfers. World Bank data found that a remittance of $200 can incur average fees between 5% and 9.3%, depending on the destination country and the type of service used. For people in developing countries that rely on these funds, finding a cheaper and faster way to remit money is essential. And it looks like some are turning their attention to cryptocurrency as the answer.

Why Developing Countries Are Turning To Cryptocurrency For Remittance

For countries where remittances are essential for their economy, being able to transfer money with no or very low costs is a definite attraction. In El Salvador, remittances totaled almost $6 billion last year, with President Nayib Bukele arguing that the introduction of Bitcoin as a new national currency would save El Salvadorans the $400 million spent annually in commission on remittances.

Meanwhile, countries where sanctions have been imposed on them have turned to cryptocurrency as a way to skirt round their embargos. Cuba now recognizes and regulates cryptocurrencies such as Bitcoin. In 2020, increasingly aggressive Trump-era sanctions led Western Union to shut down all of its 400-plus locations in the country. The process of getting money in and out of Cuba was complicated further by the pandemic. As travel ground to a halt, underground and semi-formalized courier services called mulas couldn’t operate as efficiently. All of this helped support the rise in crypto adoption.

In fact, industry specialists are starting to predict that Bitcoin will eventually become the most common form of currency in developing nations. Thomson Reuters technologist and futurist Joe Raczynski commented, “No question, BTC will lead the way here, but Ethereum may eventually take its place or serve alongside BTC as money for developing nations.”

Is Using Crypto For Remittances The Right Way To Go?

While there are reasons for this trend towards crypto adoption for remittances in developing nations, it doesn’t mean that there aren’t still risks associated with this type of transaction. While the rationale may be the decentralized nature of blockchain technology will allow for cross-border payment free of third parties, therefore cutting back on the costs involved – it doesn’t guarantee that there won’t be the potential for losses at some point.

The main issue being that there is an element of uncertainty as to how much your chosen coin will be worth when the recipient sells them. The value of various cryptocurrencies in fiat money can be volatile. Plus, much like a traditional money transfer, you should also consider the exchange rates at the time, as the money will need to be exchanged twice – firstly into your chosen coin and then back out of it when your recipient sells it. There is also the concern that human error can be made while making a transaction. And as it is a largely unregulated market, trades cannot be reversed.

However, the potential reduction in third-party fees as well as fast transaction times is a definite pull. Cryptocurrency lends itself to larger transactions, as there tends to be greater maximums for how much you can send someone compared to more traditional providers. Additionally, as coins such as Bitcoin do carry transaction fees, which are calculated on a per-byte basis rather than a percentage, smaller transactions tend to be comparatively more expensive.

A Trend That Will Stay?

For countries where remittances are at the core of their economy, crypto adoption is likely to gain strength over the coming years. But that doesn’t mean there aren’t challenges ahead. The volatile nature of the value of certain coins will deter citizens in developing countries, as well as a lack of understanding. This can be seen in El Salvador itself where Bitcoin is now legal tender, but 67.9% of people disagree with this choice.

However, crypto is a fast-moving market, and inevitably there will be new innovations that will continue to cater to using cryptocurrencies for remittances. This can already be seen through the emergence of several blockchain start-ups that facilitate Bitcoin remittances without requiring users to have prior knowledge of the technology. These include the likes of Satoshi Citadel Industries, AZA Group, Bitso and RippleNet – the last of which claims that its cost per transaction is about 90% less than the status quo for legacy money transfer companies.

Over the coming years we could easily see this trend toward using crypto for remittances grow, riding on the back of the promise of lower transaction costs and a more efficient way of sending money. There is a potential end result where the adoption of blockchain technology creates a truly decentralized remittance model which leads to lower fees, better exchange rates and faster delivery speeds.

Kate Anderson is a writer at Finder who specializes in money transfers. She has previously written for The Motley Fool UK and Fitch Solutions, where she covered a wide range of personal finance topics and kept a close eye on market trends. Kate has a Bachelor of Arts in Modern History from the University of East Anglia. When not working, she can usually be found curled up with a good book or heading out for a run.