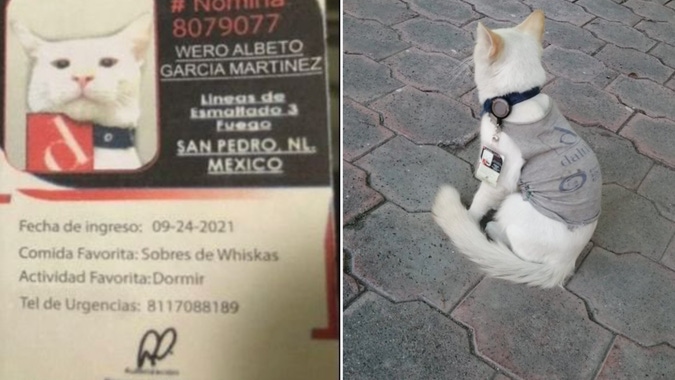 The “Wero” Garcia is an employee like many others. He fulfills his duties while proudly wearing his uniform. Only one detail: the Wero is a cat .

This beautiful story to start the week was given in a company in Nuevo León that adopted the michi and even gave him his badge and uniform.

The anecdote went viral when Twitter user @MiroslavaRoHe shared that the company her mother works for decided to adopt and “hire” the stray cat that entered the facilities in search of shelter, food and company.

In the company where my mother works there was a cat and the company adopted it and made it its badge. pic.twitter.com/1rFuLaQ0E5

The company that captured this hairy talent was Daltile , in its branch in San Pedro, Nuevo León. They decided to give him a small uniform and a badge with his new name “Wero Albeto García Martínez”.

In it you can see that “Wero” went to work on September 24, 2021, charges in cat food envelopes and his main activity is sleeping. In addition, the identification has an emergency number. As a detail, the validity of the badge indicates that he will be employed until August 30, 2026, but we are sure that once the cycle is completed, he will be rehired.

Why are these types of actions important?

A good brand reputation is an asset that does not usually come as easily as before, especially with millennial and GenZ audiences who are increasingly demanding of the principles that the brands they consume.

Humanitarian and compassionate actions can have a very positive effect on a company’s external audiences. Just look at some of the reactions that the hiring of “Wero” generated:

And when you least expect it pic.twitter.com/V7ka1WRuNi

How cool!!! I just can’t stop thinking that in my job they only give you a badge for eternity, mine is from 2013

We will be awaiting the announcement of his promotion to boss, because he looks like he is not pelagatos

On the other hand, this type of initiative can help raise team morale and be part of the emotional salary of a company, one that is paid with attitude and creativity since it pays much more than the employee’s pocket, it makes them loyal and empowers them. . The Spanish Association for Quality defines emotional salary as a concept related to the remuneration received by an employee of a non-economic nature whose purpose is to satisfy the personal, family and professional needs of the worker.

Giving a stray kitten a vest and badge doesn’t really cost anything, but it can generate a lot of goodwill and positive impact for your brand.