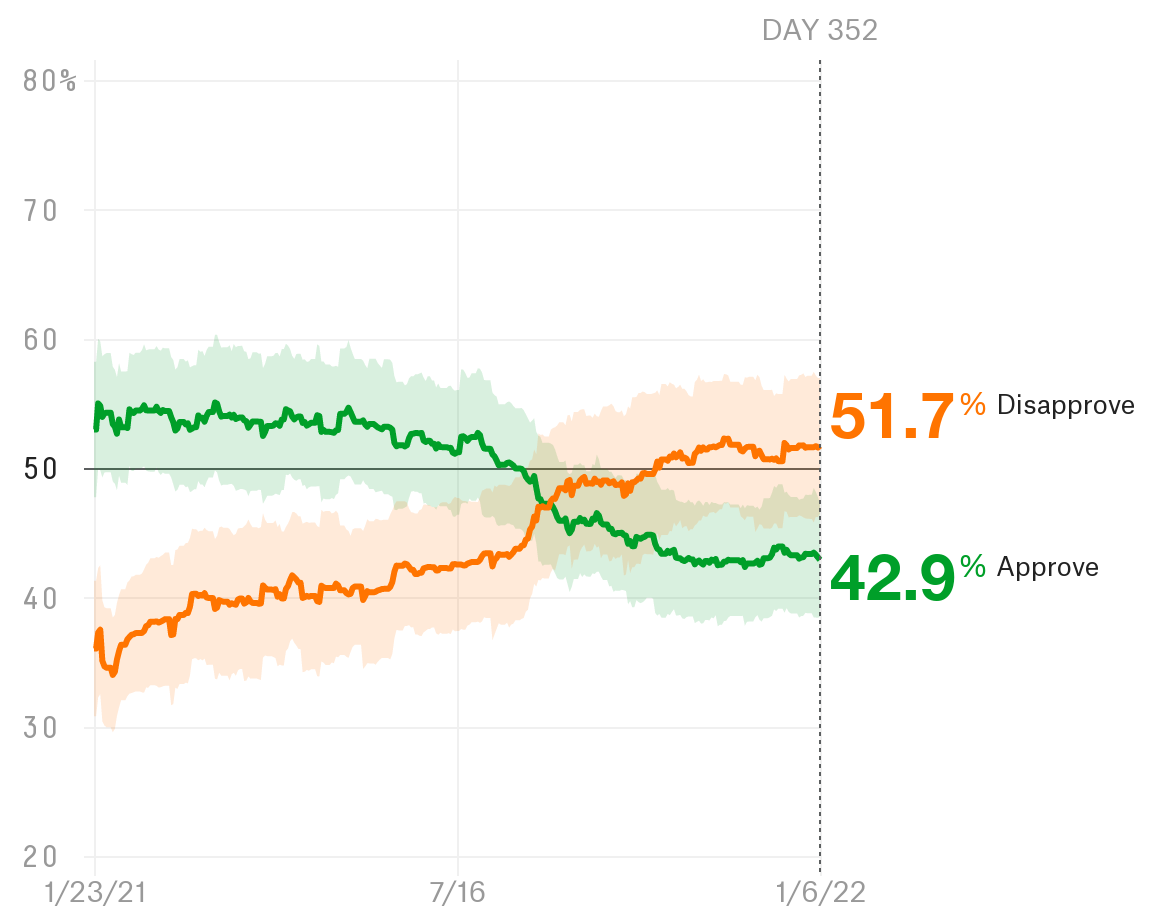 Historically, Americans haven’t disagreed on the seriousness of national tragedies — think Sept. 11, 2001. But that’s not the case with the storming of the U.S. Capitol on Jan. 6, 2021.

Yes, one year later, more than 70 percent of Americans still regard Jan. 6 as a bad or tragic day for America, including 60 percent of Republicans, but there is still a stark partisan divide on more specific aspects of the Jan. 6 attack that shows many Republicans still minimize its importance.

Likewise, a Dec. 27-30 poll from YouGov/CBS News found that majorities of Americans overall described Jan. 6 as an “insurrection” and “trying to overthrow the U.S. government,” but around four-fifths of Republicans said they would not use those terms. Almost half (47 percent) of Republicans, though, did describe the rioters’ actions as “patriotism,” and 56 percent said it was “defending freedom.” When the pollster asked those respondents why they felt that way, most said it was because the rioters were “exercising their right to protest” (82 percent) and “drawing attention to [perceived] fraud in the 2020 election” (79 percent). Only 35 percent said it was because they were “trying to stop the electoral vote count” or “targeting Democrats and those disloyal to Donald Trump.”

This hints at a big reason why Republicans seem to take Jan. 6 less seriously than other Americans: They simply subscribe to a different reality of what happened that day. For instance, a December poll from the Associated Press/NORC Center for Public Affairs Research found that while 64 percent of adults overall thought the events of Jan. 6 were extremely or very violent, only 39 percent of Republicans thought so. And according to a YouGov/Yahoo News poll from Dec. 18-22, 50 percent of Republicans believed the rioters were primarily peaceful and law-abiding, while only 33 percent believed they were primarily violent and lawless. Finally, YouGov/the University of Massachusetts found that while Americans overall thought politicians’ lives were probably or definitely at harm on Jan. 6 (58 percent to 43 percent), Republicans thought they probably or definitely were not (72 percent to 28 percent).

A sizable share of Republicans even buy into the conspiracy theory that Jan. 6 was a false-flag operation perpetrated by liberals. YouGov/CBS News found that 41 percent of Republicans believed that “most of those who forced their way into the Capitol were left-leaning groups pretending to be Trump supporters.” And according to a Jan. 2-4 poll from YouGov/The Economist, Republicans believed 51 percent to 26 percent that Trump opponents were involved in the riot, 59 percent to 14 percent that antifa was involved and 52 percent to 23 percent that Black Lives Matter was involved. By contrast, Americans on the whole believe that these groups were not involved and instead largely put the blame for Jan. 6 on Trump himself. In an average of four polls, 55 percent of Americans said that Trump deserved at least some responsibility for the attack, while 38 percent felt he deserved a little or none.

What’s more, recent polls have found strikingly high support for political violence. According to a Washington Post/University of Maryland poll conducted Dec. 17-19, 34 percent of adults said that violent action against the government was sometimes justified — up from only 9 percent in a Washington Post/ABC News poll from May 1995. And according to YouGov/CBS News, 28 percent of Americans said that election results were so important that violence might sometimes be justified to enforce them.

However, survey experiments by the political scientists who run Bright Line Watch have found that some polls may overstate support for political violence. After controlling for question wording and whether respondents were paying attention to the survey, they found that only 4 percent of respondents said they supported using violence to stop the certification of electoral votes on Jan. 6. This jibes with the answers to some of the less abstract questions that YouGov/CBS News asked, too. For instance, only 4 percent of Americans told them that Trump should use force to retake the presidency, and only 2 percent of those who expect violence in future elections said they were in favor of violence if their side loses. Still, 4 percent of the U.S. adult population is more than 10 million people — certainly enough to be concerning.