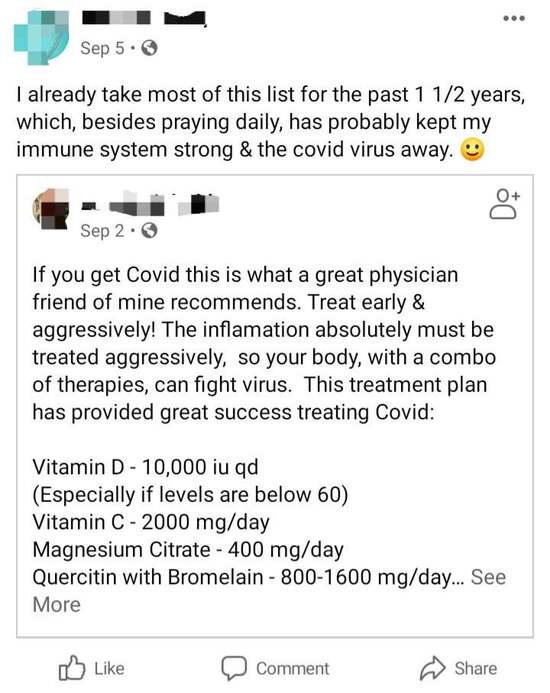 Luck kept the virus away.

Look, nothing on that list is bad. Those vitamins and minerals do help maintain a strong immune system. There is evidence that vitamin D deficiencies can make a COVID infection worse. But that’s deficiency. If you have normal levels in your body, all the extra vitamin D won’t give you extra protection. Prayer, like any mindfulness practice like meditation, can help lower stress, thus lowering system inflammation and strengthening the immune system.

But catching COVID isn’t about having a “weak” immune system. In fact, much of the problem in a COVID infection is an overreaction of the immune system. That’s what a cytokine storm is. The virus triggers the immune system into releasing a flood of inflammatory proteins called cytokines. These proteins damage tissue and organs.

Furthermore, you can have the strongest immune system in the world, but if it doesn’t know something is a malicious pathogen, it doesn’t do anyone any good. That’s what a vaccine is—training your immune system to recognize the virus as a dangerous invader so it can attack it the second it shows up in the body. It makes your strong immune system smarter.

That’s the problem with cancer—it’s cells in your body that begin multiplying uncontrollably and spread to other parts of the body. The immune system doesn’t recognize them as malicious because they look the same to them as healthy cells. That’s why mRNA is so exciting as a cure for several cancers, including the glioblastoma (brain tumor) that killed my father and John McCain. It’s about training the body’s immune system to attack and kill malicious entities, be they external pathogens, or our own damaged cells.

George Washington literally launched the first mass military inoculation in history, for smallpox. 90% of all deaths in the Continental Army came from disease, and smallpox was the worst offender. Without vaccination, there would be no Continental Army left.

Also, we don’t defeat the British without the French. But that’s another story, for another day.

If mRNA vaccines are so offensive, I don’t understand why they don’t just jab with the Johnson & Johnson one. That one is a traditional “weakened virus” one. Nothing controversial or strange or novel about it.

Also, no one is forcing it.

It’s amazing how much self-awareness they lack. They really do think they’re B, when all the objective evidence proves they are A.

Lisa Simpson would die if she knew that anti-science, anti-vaxxers were using her to sell their lie.

If it’s my family, yes, I worry if they don’t get it. So I make sure that they do.

Part of the problem here is that most people equate the common cold with the flu. So they think it’s not so bad. But it is.

And of course, they should know the flu is bad! They also post those memes with “2 million people die of the flu” or whatever made-up number. The reality is, every year, 290,000 to 650,000 people die of the flu globally. So if you can take a vaccine to lower that number, and also lower the chance you’ll pass it to someone else … why the fuck wouldn’t you?

I don’t want my family to die of COVID, nor the flu, nor anything else that can be prevented or mitigated with a vaccine. And what’s more, now that I know how effective a mask is to prevent transmission, I will also wear a mask when I’m in crowded, poorly ventilated places, because why not? Being sick sucks, even when you don’t die.

Remember when we treated disease with leeches and blood-letting, instead of apple-flavored horse paste?

And really, chicken soup was never used to treat the flu. It was used to treat the common cold, which again, is a different thing. That whole “feed a cold, starve a fever” thing. (Though really, feed both. The body needs nutrients to fight off infection.)

Too bad the assembly member’s name was x’d out, but it looks like it’s this woman from Alaska.

William Topel, a well-known figure in Anchorage’s conservative circles, had been a frequent opponent of public health measures intended to curb the pandemic and regularly showed up at Anchorage Assembly meetings to voice his defiance.

However, he was admitted to a local hospital with COVID symptoms late last week […] not long after he attended an Assembly meeting that involved swarms of unmasked protesters challenging a proposed mask ordinance […]

As the Alaska Landmine first reported, Anchorage Assembly Member Jamie Allard and her supporters quickly began demanding that the hospital treat Topel with ivermectin, a drug that is not proven to treat COVID but has been touted as a miracle cure by the far-right.

These guys mock Islam as a religion of peace, yet walking around with their “Prayer warrior” bullshit.

So you know all those memes about the nurses who are quitting because of vaccine mandates? Why don’t they create a Prayer Warrior-brand network of ivermectin clinics to treat these people, so they don’t clog up real hospitals? They all know better than the entire medical and scientific establishment, so just freakin’ secede already. They can do their own thing.

I really feel terrible for the people working in hospitals, it’s hard enough to deal with the pandemic itself, especially when it’s so easily mitigated with vaccines. Now they have to deal with bottom-feeder lawyers giving family members false hope.

If the hospital is calling the police, it’s not because they’re politely showing up just delivering some vitamin C capsules and a phone charger.

And yes, it’s not supposed to be easy for “friends” to get power of attorney over people they’re not related to, for every patently obvious reason.

I really don’t see what’s so nefarious about last rites being done outside, where the family can more safely participate. It’s actually a lovely solution to what is a crushingly difficult situation. How that is “medical tyranny” is a real mystery.

That is such a reasonable response from the hospital. Yes, an anti-parasitic doesn’t cure a viral disease.

Not sure why they think Hospital 2 will give them a better deal on ivermectin treatment. They’re all operating under the same protocols.

OMG. He’s now a FREEDOM FIGHTER in heaven? What, is he in a Heaven Special Operations Unit engaging in raids against Satan’s minions in hell?

Ah yes. It’s the hospital’s fault he died, not his shitty life choices.

They really do need their ivermectin clinics staffed by unvaccinated nurses.

Should we call them “Freedom Clinics”?

If I was an amoral asshole, I would start those clinics myself. They would clearly make a killing from some of the most deluded people in the world, funded through GoFundMe campaigns. Would make a killing. Um, quite literally.