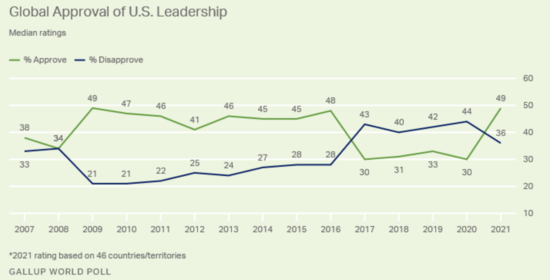 Though any fallout over the U.S. withdrawal from Afghanistan remains unknown at this point, Biden earned a substantial amount of goodwill by immediately rejoining the Paris Agreement, while reversing Trump’s planned exit from the World Health Organization. In February, Biden also publicly promised U.S. allies that “America is back” in his first address to a global audience at the annual Munich Security Conference.

“Ratings improved the most—by at least 40 points—among several European allies, including Portugal (52 points), the Netherlands (45 points), Norway (42 points), and Sweden (41 points). Importantly, the U.S. also regained ground among the countries in the G7, with ratings rising 38 points in Canada, 36 points in Germany, 30 in the United Kingdom, 22 points in Italy, 18 points in France, and 11 points in Japan,” writes Gallup.

However, the U.S. took a hit in Russia and Serbia after Trump left office. Go figure.

Despite the increases in all but three countries globally, U.S. leadership remains underwater among some key allies, including: