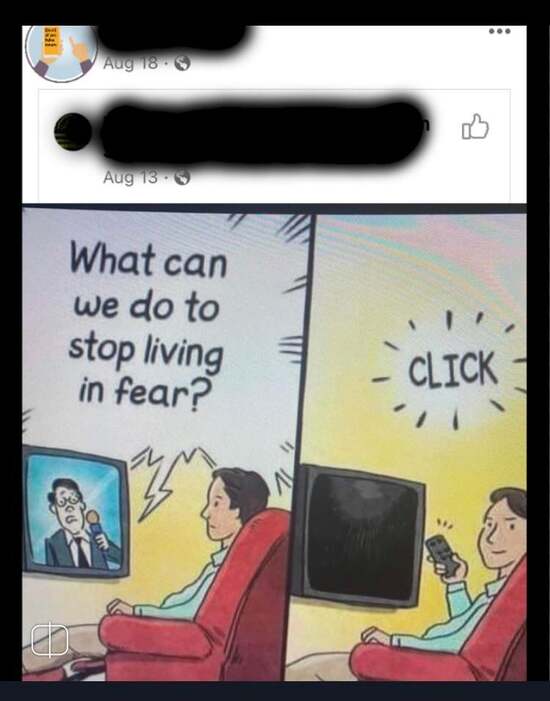 Right, as if their TV isn’t superglued to Fox News for an all-you-can-eat buffet of fear.

So if people don’t have guns, six million people will be murdered as a result?

What was that thing about “not living in fear”?

And really, this is the most disgusting fucking shit these assholes can spread. Fuck them to high hell for this, with an extra dose of “rot in hell” for pulling children into it.

Yes, it’s a ridiculous projection. Yes, it’s deeply offensive. This is a disgusting, vile human being.

The Evangelical bastardization of the Bible and the words of Jesus are a plague on this country.

I hate cash. I love to pay with my Apple Watch. The notion that this has Biblical implications is so patently absurd that it physically hurts me to think that people believe it.

Weird how turning off the TV didn’t protect them from a deadly global pandemic.

But sure, thank Jesus for getting a highly transmissible disease that could’ve been avoided with a simple free jab.

I picked this story because of the excruciatingly detailed day-by-day reports. It’s a necessary reminder that this isn’t a peaceful disease, but a horrifically painful ordeal that I wouldn’t wish on my worst enemy.

Now he’s on a ventilator, so, apparently, Jesus didn’t care for the previous thank you.

Two weeks in, his legs are in jeopardy as the virus attacks his various organs. Infections break out.

The virus is a horrible weapon from Satan. God worked through the scientific community to develop a vaccine, and these people gave that life- and leg-saving vaccine the middle finger.

Look, I’m an atheist and don’t believe in Satan or God, but building a life-saving narrative would be so easy! Instead, they cling to the notion that they’re helpless against Satan’s evildoing.

But … how can it be Satan’s evildoing if it’s not something they’re afraid of? Satan is scary! Why brag about how they won’t live in fear?

Of course, there’s no cohesive logic here. And it’s too bad because that would give us the building blocks to build a vaccination campaign: “Thwart Satan with the GOD VAXX.” Unfortunately, it’s not that easy.

And as a result, here’s a man in the hospital, his body under system assault—fever, tachycardia, organ inflammation, and blood clots that cost him both his legs.

And because his lungs are failing, a tracheotomy is on the schedule.

Happy one-month hospital anniversary. She thinks her God prepared him for losing his legs, and then she praises that same God? I can’t.

Thank heavens for that wonderful nurse. She was a salve amidst all this darkness.

He has anxiety because he lost his legs, he’s plugged into who knows how many machines, his whole body is in so much pain that he needs to be kept in a semi-drugged state to tolerate it.

Rebuke it all you want, but the countermeasure to COVID isn’t prayer, it’s a free jab. It’s a marvel of modern medicine. Satan can’t believe his luck that people are refusing to take it!

He wants to be sedated because living is torture. And he can’t turn off the TV to have things magically get better. There can be no “ignorance is bliss” in this situation.

HE IS BEING TORTURED. He’s pulling all the tubes out because he is in agony. I get that she’s under a lot of stress so the “LOL” seems grossly out of place, but nothing about this situation is humorous. It’s devastating. And his anxiety isn’t better, he just ripped a feeding tube out of his stomach.

My brain screams OMFG in every panel in this story. This is literally my worst nightmare. Given the choice, I’d rather COVID-19 take me quickly than “survive” in this manner.

Clinging to faith under these conditions is … something.

Please, if I’m ever in the hospital and I can’t pee, and they need to insert or re-insert a catheter, for the love of all that is holy, don’t broadcast it to the world! Hasn’t this poor guy suffered enough? Now he must be humiliated?

Maybe if she said “everyone, avoid his fate, please vaccine,” there would at least be a bigger, more noble purpose. But unfortunately, no sign of that anywhere here.

Two months in, the suffering continues. This isn’t measured in the death toll—how wrecked surviving a serious bout of COVID can leave you. And that’s assuming he ultimately survives. That still isn’t assured.

Oh good. Their fundraising raffle is for one of these, just as Jesus would’ve wanted:

Here is this guy, still fighting for his life, and their attempt to raise money features a death stick.

Of course, there’s no way anything they raise will cover medical expenses, loss of his income, making his house ADA compliant, and the cost of the prosthetics. There’s no talk of medical insurance, so this’ll mostly land on them, with a medical bankruptcy that willl spread the costs to the rest of us. He has children that will suffer, as well, from their broken father and deep poverty.

And that’s all assuming he survives!

ALL OF IT AVOIDABLE.

That’s the worst part. Early in the pandemic, it was bad enough. But now? It’s all avoidable.