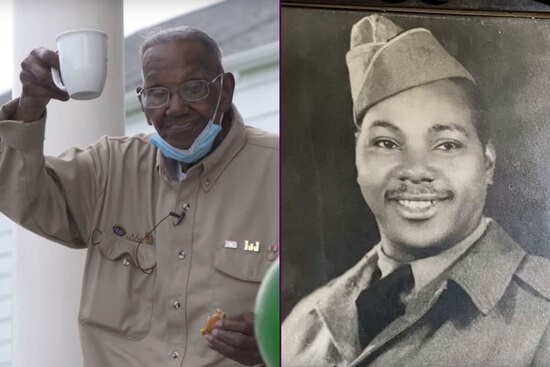 Brooks was cared for in his last year by his daughter Vanessa. Vanessa spoke with the Associated Press back in October about the toll caregiving took on her financially, and the sacrifices she and others made to support aging veterans like Brooks. “I want him to be comfortable, happy and himself. If I can keep him in his right state of mind until God calls him home, that’s my intent.”

According to all reports, Vanessa did just that.

The Army was still segregated in World War II, and Brooks did not receive the same benefits for his service that his white counterparts received. Brooks spent a good amount of time stationed in Australia, where he was treated with more dignity than he had received from his own home country. Brooks told reporters that when he looked back at some of the time he spent in Australia during the war, he couldn’t help but compare his treatment there to his treatment at home. “I was treated so much better in Australia than I was by my own white people. I wondered about that.”

Vanessa told CBS News in December that she has hope that while her father was denied the benefits of a free college education through the G.I. Bill, as well as housing opportunities because of our country’s racism, she might still have a shot. She said she believed her father was alive for so long because he held on to the dream that at some point our country would do right by him. “It’s too late for him, but he wants me to go to school and I want to go to Tulane, but it’s just a dream. If the G.I. Bill is revived, I’ll have the opportunity to go back to school on my daddy’s shoulders.”

According to the National WWII Museum’s president, Stephen Wilson, who spent time with Brooks during the last years of his life, Brooks remained an optimistic force. “He was a beloved friend, a man of great faith and had a gentle spirit that inspired those around him. He proudly served our country during World War II, and returned home to serve his community and church. His kindness, smile and sense of humor connected him to generations of people who loved and admired him.”

Brooks had marked his 112th birthday with a “drive-by party” in front of his New Orleans home this past September. According to the National WWII Museum, Brooks’ birthdays since 2014 were hosted by the museum.

Enjoy the video below of Brooks talking about a harrowing experience he had during the war. Rest in peace.