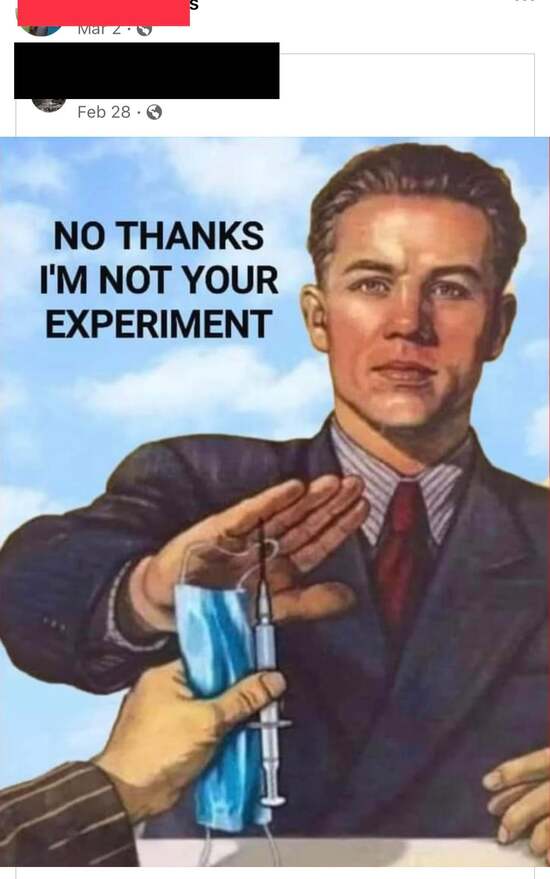 Note that it’s not just the syringe that’s “the experiment.” It’s also the mask.

The irony is that the placebo is a nonfunctioning version of whatever medicine is being tested. So as much as these guys talk about refusing to partake in the experiment, they are, in fact, deeply in it. They are the people proving, every single day, the value of the vaccines.

How many COVIDS did they kill with those guns, and by obsessing over stupid shit like gendered bathrooms?

This one is so popular, I finally looked it up.

The Amish communities of northeast Ohio engage in textbook communal living. Families eat, work and go to church together, and through the pandemic, mask-wearing and social distancing have been spotty. As a result, these communities have experienced some of the state’s highest rates of infection and deaths.

So to recap, things that don’t stop COVID: guns, gendered bathrooms, taking creepy pictures of your daughter on top of a statute of parakeets having sex, and the Amish’s famous refusal to own televisions.

I mean, we could talk about the differences between ancient slavery and chattel slavery as practiced in this country—a legacy that still permeates the very fabric of our country.

These assholes should feel guilty about our nation’s history, and strive to build a better, more equitable America.

Instead, they’re crying about “critical race theory” and screaming “YOU’RE NOT SPECIAL.” (As if anyone suffering from the legacy of slavery is feeling “special.”)

Doing the math, that means you’d shit your pants once a year.

If I knew that I would shit my pants once a year, then there’s a pretty good chance I’d wear some kind of protection.

Do they … do they think Miami Vice is real life?

You guys have no clue how good you have it. You have just been regaled with “the best humor.”

Maybe learn about something first before ignorantly opining on it?

Come to think of it, that would solve much of this anti-vaxx stupidity.

Dumbass didn’t even do this right. It should be a) a shot glass, so you can claim that you had your ‘first shot,” or 2) a Corona beer bottle.

Or is that a truncated hot toddy—whiskey, honey, and shit, he ran out of lemon? Newsflash, it doesn’t cure the flu.

This is the problem with being the placebo in the experiment: You get stuck with the raw end of the deal.

Unfortunately, it didn’t need to be like this. Placebos are usually “double-blind,” meaning no one knows who has the placebo, neither the patient nor the researcher. In this case, he chose his fate, which was as stupid as snorting tainted cocaine.

A Outline Of Horse Racing At Oaklawn Park In Hot Springs, Arkansas