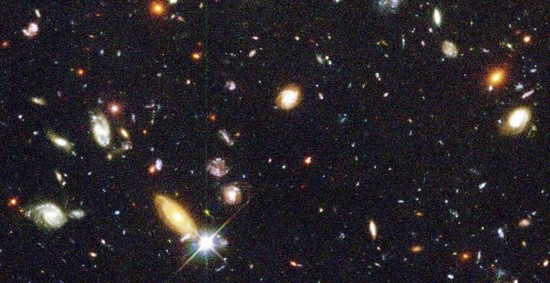 After Hubble was launched in 1990, scientists discovered that the telescope’s mirror was slightly off, making the instrument’s images blurry and blunting its ability to make discoveries. That original launch of Hubble was supposed to happen in 1983, but the technical challenges that would befuddle the team behind Webb also appeared 30 years earlier, constantly delaying Hubble and requiring additional funds and testing. Despite all that time and testing, they still had an issue.

Starting in 1993 and continuing until 2009, NASA conducted four servicing missions that were, and still are, one of the great triumphs of crewed space flight. In those missions, the telescope was given “corrective lenses” to account for the slight distortion in the mirror. The servicing missions also mounted new and improved instruments, some of which included technology not even available when the telescope was launched. The missions require both the space shuttle and the astronauts to work at the limits of their abilities, and the result of that work were images and data that have generated both wonder and a new understanding of the universe.

But Hubble is limited. Because its primary instrument is designed mostly to collect visible light (i.e. the same spectrum of light that humans see), it can’t peer back into the earliest eras of the universe. That’s because light tends to get “red-shifted” by the expansion of the universe. Light that was visible light in the first billion years of the universe is now pushed by distance and speed in the deep infrared, making it invisible to Hubble. The size of Hubble’s mirror also limits the resolution of objects that it might pick up, making things like the faint light reflected by planets around other stars outside its reach. And finally, Hubble’s location in Earth’s orbit limits the area of the sky it can search, as well as subjecting the instruments to a wash of light, drastic changes in temperature, and other forms of interference.

Webb is designed to see into the infrared, giving it the ability to detect objects as old as 100 million years after the origin of the universe. Its larger mirror means it can gather more light, allowing it to image objects that are too faint for Hubble. Its distant, protected position will allow it to operate without “light pollution” from Earth and Sun, allowing its observations to be even more sensitive.

The Webb isn’t the first large infrared telescope to be sent into space. In 2009, the European Space Agency launched the Herschel Space Observatory as part of a joint mission with NASA. That telescope had a 3.5-meter mirror—larger than Hubble’s, but considerably smaller than that of Webb.  Herschel was also sent out to the L2 point, keeping it distant from Earth and not subject to the heating and cooling that happens when satellites in low Earth orbit. However, rather than carrying the series of heat shields that will protect Webb’s instruments, Herschel was cooled by a tank of liquid helium. Four years into the mission, that cooling simply … ran out of cool. The instruments failed on April 29, 2013. Since then, astronomers have been waiting, not-at-all patiently, for the launch that will finally come on Christmas.

After over 25 years of development, the anticipation for Webb is enormous. Hundreds of scientists have constructed theories that are waiting for data from Webb to be tested. Scientists are anticipating the potential to learn about everything from the early days of the universe to the potential for habitable worlds and the nature of dark matter. To say that thousands of careers are dependent on what happens over the next few days is a big underestimate of just how vital this instrument is to astronomers and others around the world.

For a decade, a full quarter of all NASA spending has been dedicated to this one mission. This one tool. With the cost, the complexity, and the out-there orbit, the JWST is a “one shot.” If everything goes right, it could—it will—offer a much deeper understanding of the universe, unprecedented views of the largest and most distant structures, and discoveries that have not yet been contemplated. Or one of the 344 must-pass events will fail. And we get nothing.

There is no chance for a repair mission. There is no back-up Webb waiting in the wings. It launches on Christmas, and it works. Or it fails, and who knows when another opportunity will come.

Launch will be far from the end of the perils for JWST. Even though it is scheduled to launch on Christmas Day, it won’t begin to operate until the summer of 2022. Over a six-month period, the telescope, and the “bus” that carries it, will go through that long list of can’t-fail tasks. That includes deploying those enormous, and almost impossibly delicate, sun shields, as well a kind of reverse-origami unfolding of the telescope’s hexagonal mirror tiles.

So while scientists will certainly cheer the launch of JWST and feel enormous relief that it’s finally on its way, this is far from the end. There’s going to be a lot of anticipation, and anxiety, over the next few months as Webb gets ready for its debut.

On Thursday morning, Atlantic space reporter Marina Korin is providing regular updates as the Ariane 5 heads for the pad. Though everything looks good at the moment and the Ariane has proven to be a highly-reliable launch vehicle, there is still the possibility of last-minute delays. NASA has already set up a stream and will provide live coverage of the launch. A wealth of additional information is available on the mission page.

Cross your fingers. And maybe wish upon this rising star.

Note: In March of this year, an article in Scientific American called on NASA to find a new name for the James Webb Space Telescope. The observatory is currently named for James Webb, who served as NASA administrator during the Apollo program. However, Webb also worked at the State Department in the 1950s where he involved in psychological warfare during the Cold War. In addition, he engaged in policies, both in the State Department and at NASA, intent on purging LGBT employees and researchers. However, Webb’s role in these policies seems to be one of enforcement, not origination. Other scientists inside and outside of NASA have pushed to preserve his name, praising the role he played in the early space program and his efforts in promoting space-based science. The controversy around the name continues, and there is some possibility that the observatory may be renamed in the future.