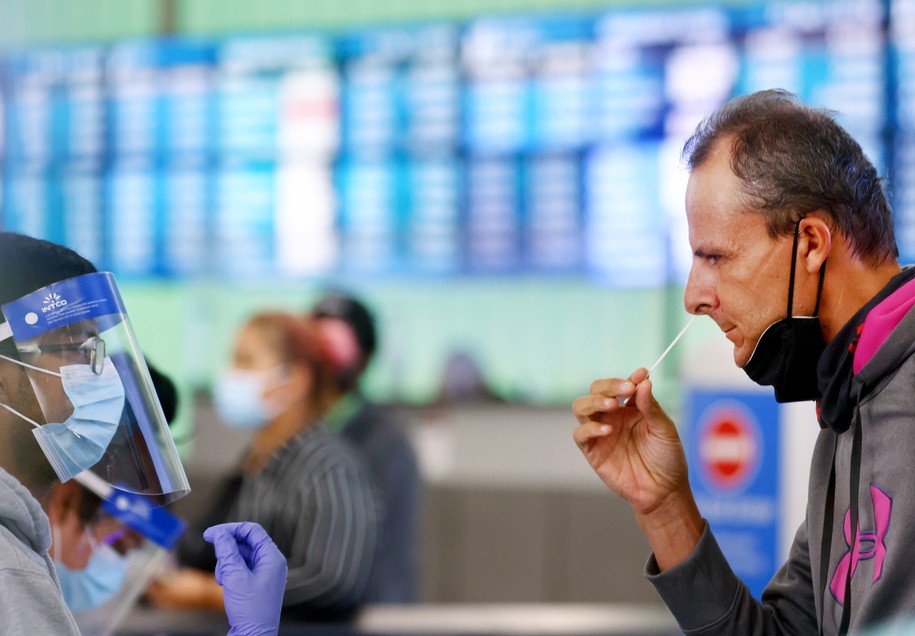 Now that at-home testing kits are available—or, at least, sometimes available—it’s becoming more common for those who suspect they’ve caught a COVID-19 infection to test themselves for the virus rather than going to a doctor’s office or public testing site. On one hand, that’s great news. It’s both more convenient than taking that trip and much safer for all the people you won’t have to come in contact with.

A big question, however, is whether home testing kits might be hiding the true rate of COVID-19 spread in a given community. NBC News probes that one, reporting that local health departments would, in most cases, very much like for you to let them know if you’ve taken a home test that turns up positive.

You can do this in one of two ways: If you have a regular doctor, let them know. They’ll either ask you to come in for a more reliable second test or will, at the least, add you to their own tallies. You can also look for the forms for self-reporting on your local health department’s website.

That might sound overly invasive on first read, so let’s talk about why this is important. (And it is important.)

Because we are in a pandemic, most health authorities are desperate to learn just where the virus is spreading or isn’t spreading during any given week. That’s the reason public test facilities, hospitals, and your own doctors are asked to submit their own tallies of positive cases. Positive test results are a leading indicator for upcoming hospitalizations, and the essential point of all of our pandemic safety measures is to slow the rate of the virus’ spread so that hospitals are not so overwhelmed with patients that they can’t cope with the surge. When hospitals run out of beds, or staff, or oxygen, or machines, that’s when mass death begins to happen. The point of masking and other social distancing measures isn’t to stop the virus completely; as we’ve seen, that’s a near-impossible task. It’s to slow the spread enough that those who need a hospital bed can still find one.

The alternative is Americans dying in tents and in hallways because there’s simply not enough staff or equipment to treat them. And we’ve seen that happen.

As a surge of omicron-infected patients begins to build on the previous surge of delta-infected patients, hospitals are currently in a dire spot. Health officials are expecting the winter surge to be very large and very brutal, but it’s impossible to say just which counties will bear the brunt or for how long.

But the omicron variant also appears to be well controlled by current vaccines; if you’ve gotten a recent booster and are not in a high-risk group, the odds of you needing hospitalization after being infected are very, very close to zero. That’s very good news, but it also may lead to Americans not reporting their infection if they test positive using a home test kit because many of those cases will be either asymptomatic or so mild they’re not considered “important.”

Nope. Still important. You may be feeling fine, you may not have any symptoms at all, but if you’ve been exposed to COVID that means, by definition, that somebody spread it to you. And that “somebody” likely spread it to several other people as well; your own positive test means that in your county, in your city, there are new active cases.

This is vital information for local health officials. If they know that local cases are rising, and know the rate at which they are rising, emergency plans can be put in place to free up hospital beds for the new cases that will become severe. Hospitals can cancel nonemergency procedures, freeing up staff. The now-familiar parking lot tents can be set up in preparation for a surge of patients. Hospitals can scrounge for additional staff, if possible, and make sure medical equipment is available.

Your own case of vaccinated, boosted omicron may end up being no more severe than a typical winter cold, but health officials still want to know because, again, there’s no way you’re the only case. It’s not enough to just let the people around you know that you’ve been exposed and that they might need to get tested too; make sure your case is added to the local tally so that your local hospitals can have the best possible picture of what’s happening around them.

The rise of home test kits may mask another problem, as well. If home test kits are in wide use, that makes it much easier for Americans to determine whether they’ve been exposed even if they have no symptoms. It’s likely that Americans who trundle into public testing clinics are there because they have symptoms consistent with COVID-19 and want to make sure, but it’s likely home test kits will be used more liberally, catching more asymptomatic cases than the public clinics are.

What if those home-confirmed cases go unreported, though? Then we’ve got a distorted picture of how omicron is truly behaving, with the data skewing more towards the more severe cases while missing many of the asymptomatic ones. That’s not a public health crisis, but it does mean we may not be fully understanding how the new variants are spreading. That makes it harder to plan.

The next big question, however, is how much any of this matters. The short answer is we don’t know, and that’s why public health officials are worried. We’ll only know after the fact. It is possible that the number of home-tested positive cases going unreported is so vanishingly small that it doesn’t much matter when compiling the rest of the statistics. Those are cases that probably would have gone unreported even back when home testing wasn’t an option, after all; if you don’t have strong reason to believe you’re infected, you may not prioritize something as burdensome as going to a doctor’s office or public testing site.

But we don’t know for sure, and knowing that “mild” COVID-19 cases are spreading locally is still very important information for health officials to have. So if you’re not planning on seeing a doctor or getting the results of your home test kit confirmed by health professionals, go to your local health department’s website and see if they provide a way to self-report. It’s not for you, it’s for them. They can’t prepare if they don’t know a new wave is coming.