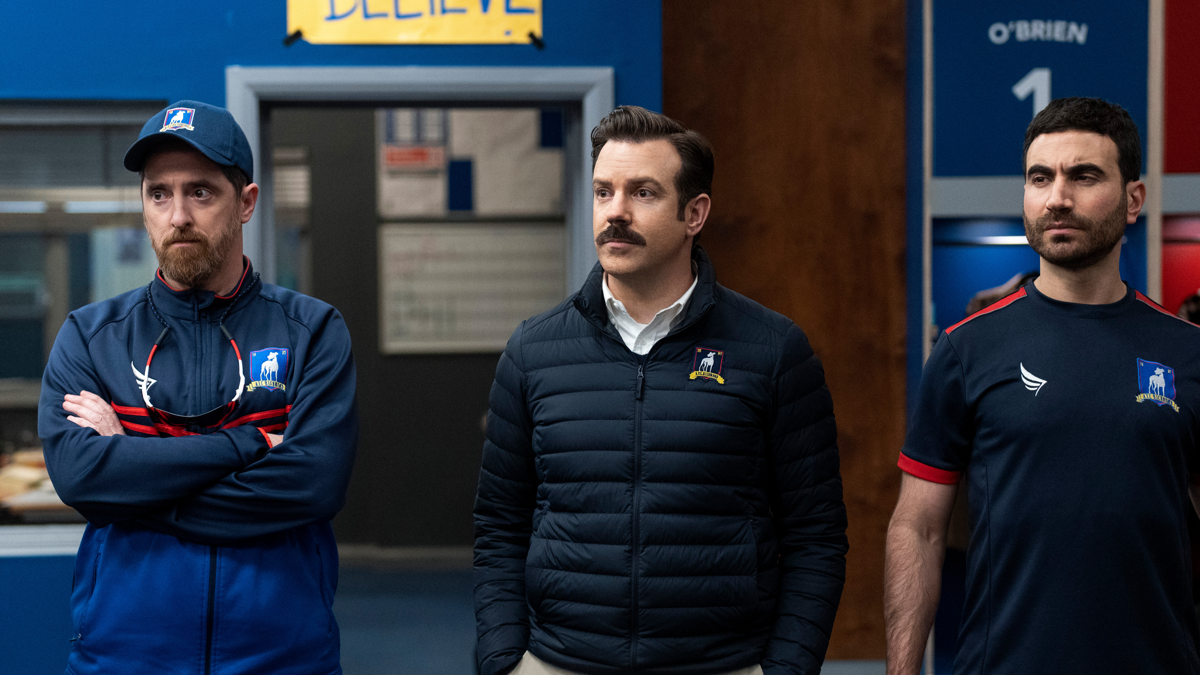 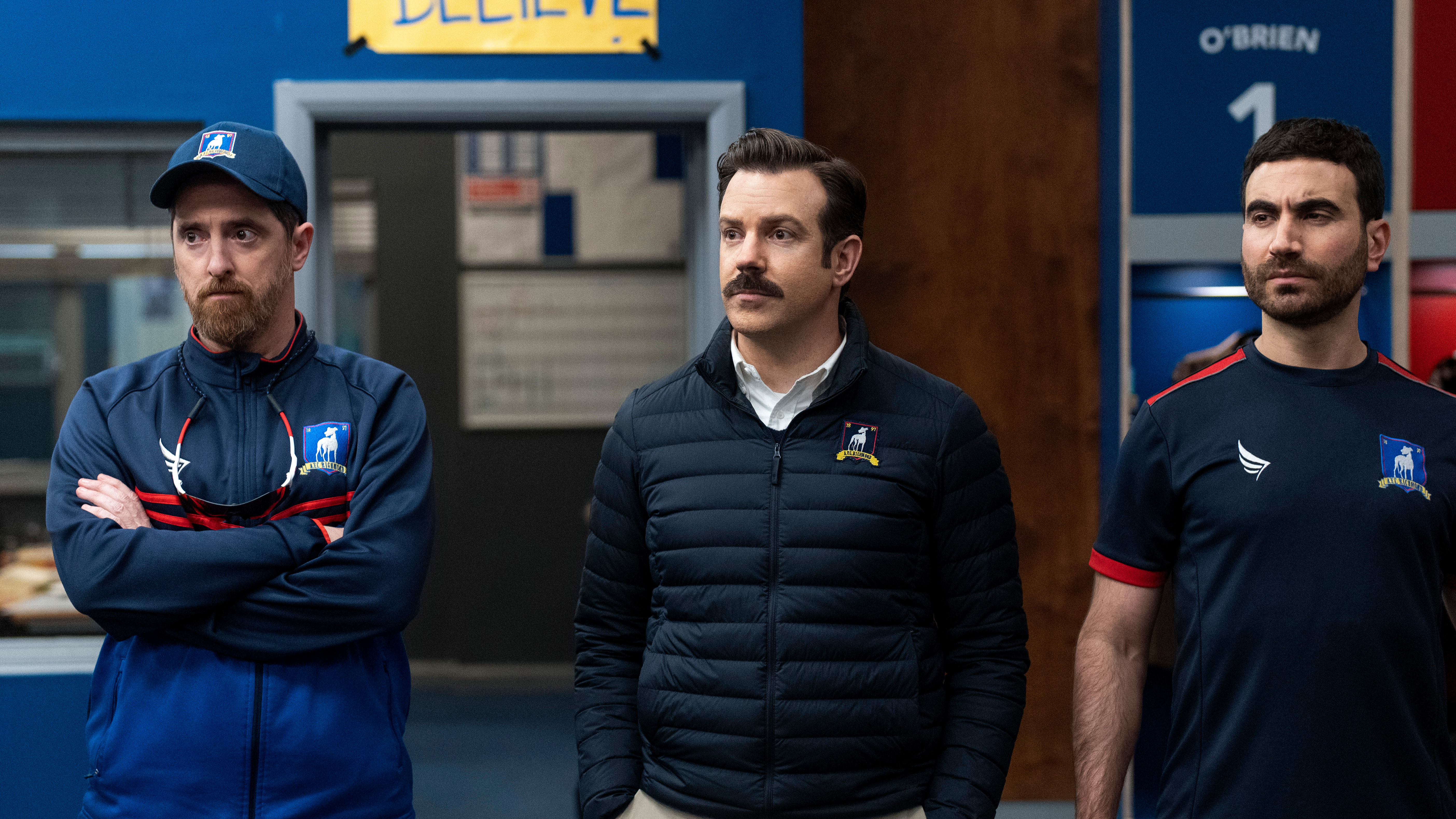 Ted Lasso is no after-school special, but Season 2 of the hit Apple TV+ series clearly has a Very Important Message about what it means to be a good man.

In the Ted Lasso universe, good men share common traits. Empathy, vulnerability, a sense of humor, playfulness, self-compassion, and inner strength are words you might use to describe not just the titular character portrayed by Jason Sudeikis, but also most of the men who surround him.

These guys are no heroes, stripped of their flaws and propped up as caricatures of role models. They make mistakes. They get angry and lash out. They miss important emotional cues. But they also reflect, connect, and apologize. Sometimes the redemption comes a little too easy. On the other hand, the writers make admitting wrong and accepting forgiveness look attainable for men who’ve traditionally learned that doing so is akin to showing weakness.

Ted Lasso is resonant because of its goofy, clever humor, and its optimism about the human condition. We can choose to be the best of ourselves, and when we fail, we can make amends. That’s a lesson every viewer, regardless of their gender, can embrace. But the series gives men explicit permission to explore the most virtuous aspects of their inner lives. These personality traits are typically stigmatized in a culture that rewards stereotypical shows of masculinity like dominating the room or field and winning at all costs (hello, Nate and Rupert!).

Ted Lasso succeeds when it offers viewers a study of contrasts and lets them (mostly) draw their own conclusions. On the show, a good man isn’t a single ideal.

There’s Roy Kent (Brett Goldstein), whose Oscar the Grouch vibe, complete with menacingly bushy eyebrows, is really just the surface layer of a complex human being who feels things deeply. When he first starts dating Keeley Jones (Juno Temple), a so-called groupie who becomes AFC Richmond’s publicist, Roy is awkward and emotionally removed. Season 2 sees his defenses unravel. He yields to love. He learns how to put Keeley first when appropriate. Viewers see him play the father figure to his niece, whose own dad isn’t around. Beneath the grunting and cursing is a man capable of vulnerability and devotion, and those traits enrich his life rather than make him weaker.

Now take Jamie Tartt (Phil Dunster), the team’s star who evolves from a selfish playboy into a self-aware team player. As Jamie confronts his father’s longtime verbal and physical abuse, he recognizes that it turned him into an uncaring bully. Among the most touching scenes of season 2 is the locker room clash between Jamie and his father in which son punches father after one too many humiliating provocations. The episode’s title, “Man City,” is no accident, however convenient it is that AFC Richmond goes up against Manchester City in a pivotal match at Wembley Stadium. Despite years of rivalry between Jamie and Roy, with its flashes of anger and violence, Roy is the one who embraces a shaken Jamie as his teammates watch in astonishment. This is what caring can look like between men. When it’s rooted in empathy rather than competition, the bond of manhood can transcend its stereotypical limitations and become a salve for deep emotional wounds.

That brings us to Nate Shelley (Nick Mohammed), the equipment manager turned assistant coach whose painful insecurities ultimately drag him to the Dark Side, where he thinks being cruel and unfeeling is the only path out of self-loathing. In one moment during the season finale, Nate stares quizzically at Ted’s poster of the Pyramid of Success, a rubric created by the former basketball coach John Wooden. If there’s any map of what it means to be a good man (or human) on Ted Lasso, this illustration of 25 traits and behaviors that lead to success is surely it. Among the virtues that it touts are loyalty, friendship, cooperation, sincerity, and honesty, all things Nate appeared to possess at one point but which he’s surrendered gradually throughout the season.

Viewers get glimpses of what fuels his downward spiral: the never-ending disapproval of his father, off-hand comments and jokes from colleagues that poke at his masculinity, feeling invisible to everyone from a restaurant hostess to Roy himself. When he finally confronts Ted over feeling neglected, it sounds like a speech for his own father.

“You made me feel like I was the most important person in the whole world, and then you abandoned me,” Nate tells Ted. “I worked my ass off, trying to get your attention back, to prove myself to you, to make you like me again. But the more I did, the less you cared.”

It’s no surprise that Nate rips up the team’s “Believe” poster and ends the season poised to become the series’ Big Bad as the head coach of Rupert’s West Ham, a revenge act for both men. He stares into the camera as the episode closes, looking soulless and ready to live out his fantasy from a previous episode: ravage anyone who looks at him wrong.

This version of Nate is a bad man, just like Rupert (Anthony Steward Head), the vindictive and controlling ex-husband of AFC Richmond owner Rebecca Welton (Hannah Waddingham). Though Ted Lasso is unequivocal about its judgment of Nate, it naturally reserves some empathy for him, too. The questions of season 3, of course, are how much damage will Nate do and will someone (or something) shake him from his trance of unworthiness?

Gary Barker, president and CEO of Promundo, a nonprofit organization that advocates for gender equality, has eagerly watched this season of Ted Lasso unfold. He told me the show offers alternate and much-needed portrayals of manhood, like when the AFC Richmond players happily see a team therapist and thrive following epiphanies about what irks them, or when Beard (Brendan Hunt) sweetly surprises three nerdy male fans with an unexpected visit to the team’s field, or when Leslie Higgins (Jeremy Swift), the team’s director of communications, hosts an annual Christmas gathering to which every player is invited.

“Showing men showing up for each other,” is how Barker describes Ted Lasso. Such camaraderie and support is more than a hollow gesture, he adds, because the men also empathetically call each other out to do right.

It’s a simple but taboo conceit. Ted Lasso seems determined to make it the norm.