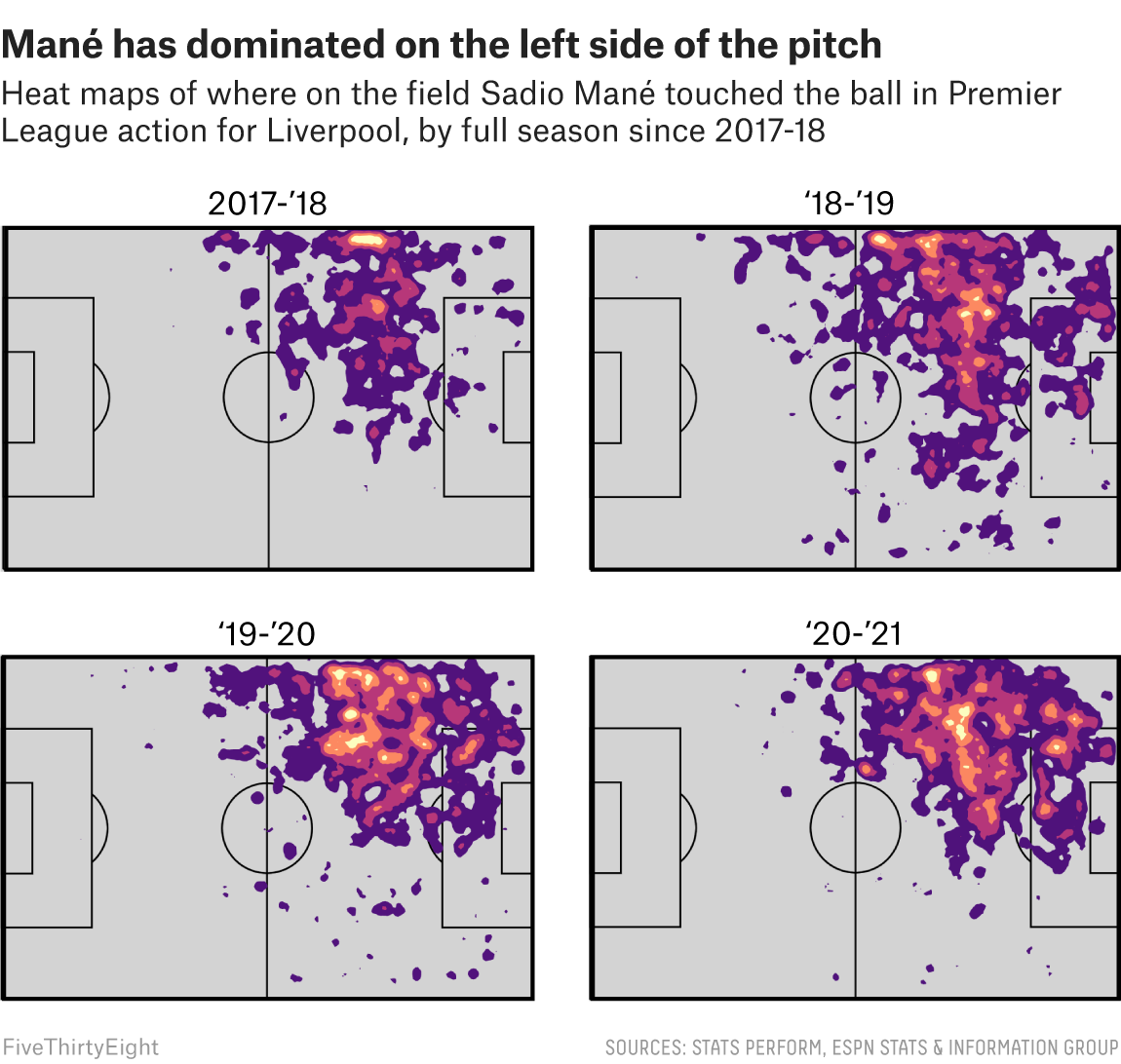 When Liverpool signed Sadio Mané in the summer of 2016, the Merseyside club knew it was getting a dynamic attacking player. Still in his early 20s, Mané wasn’t the full package yet, but he displayed the kind of pressing intensity, intelligent (and relentless) running and nose for goal that then-new Liverpool boss Jürgen Klopp looked for in attackers. Mané wasn’t initially a world-beater, but it seemed that it wouldn’t take long for him to become one.

In his first two Premier League seasons with Southampton, Mané registered a combined 21 goals and nine assists. In his seven full seasons in England’s top division — those first two on the south coast, and the past five on Merseyside — he’s never contributed fewer than 13 goal involvements. His 131 goal involvements in 229 games played means he contributed to a goal in one way or another in roughly six out of every 10 Premier League games he played during those seasons — a better rate than superstars such as Raheem Sterling, Son Heung-min and former Chelsea hitman Eden Hazard. Not too shabby.

Indeed, since the beginning of the 2014-15 season, few attackers in England’s top flight have been as consistently excellent — and as consistently dangerous to opposing defenses — as Mané. He’s never ranked lower than 22nd in non-penalty expected goals per 90 minutes, and he’s ranked 12th or better in each of the past four seasons. Over the course of his seven seasons in the Premier League, Mané has been the league’s fifth most dangerous attacker in non-penalty expected goals, trailing only Sergio Agüero, teammate Mohamed Salah, Harry Kane and Romelu Lukaku. Again, not too shabby.

Mané’s actual goal numbers dipped slightly last season during what can only be described as a deeply weird campaign: Liverpool lost all its starting center-backs, its best midfielders were forced to fill in as makeshift defenders (which thrust its midfield into chaos) and its usual attacking structures were out of whack. But Mané’s low goal numbers still weren’t that dissimilar from those of his first two seasons on Merseyside. And his expected numbers were as good as (or better than) they had been in previous seasons with the Reds, which suggested that Mané was occupying the same spaces and finding the same shots he did in previous seasons, even if the ball wasn’t hitting the back of the net as regularly. Mané was definitely unlucky during the 2020-21 season, but he certainly wasn’t bad. And yet a narrative emerged suggesting the latter was true. Mané was labeled as experiencing a stretch of poor form — the player even seemed to believe so himself, remarkably — and some wondered if he was on a permanent decline.

In a sense, Mané’s previous greatness was probably working against him. Fans became so accustomed to watching the Liverpool winger perform miracles every week that merely playing very well (rather than playing like a god) made it seem as though he was somehow ordinary, if not outright bad. But in reality, nothing changed, Mané’s goals only sort of dried up. Looking at Mané’s touch maps for each season he’s played on the left side of Liverpool’s feared front three, it’s clear that he’s been finding space and receiving the ball in almost identical sections of the pitch for the past four seasons.

Mané’s favorite space to receive the ball is in the middle third of the attacking half, on the left side. From there, he has a number of different balls he could play: He could run at defenders toward the penalty area, wait for left-back Andy Robertson to make an overlapping run on the outside and feed the ball through a half-space, or play centrally to Roberto Firmino, who could then look to create something inside or around the top of the box.

Mané’s shot maps look remarkably similar over that same timespan as well. He doesn’t take a lot of shots from outside the box — which is smart! — and most of his goals come off of shots from roughly the dead middle of the penalty area (from the goal line to the penalty spot). In 2020-21, Mané took more shots per 90 minutes than he ever had in a Liverpool jersey, registered the most xG per 90 he ever did in a single season in his time in the Premier League and created far more chances per 90 than he did during the 2018-19 season when he won the Golden Boot. Expected goals don’t win games or fill trophy cases with silverware, but they do predict future performance better than any other metric. And they paint a more accurate picture of a player’s performance over the course of a season than actual goals. Simply put, last season, Mané was as brilliant as he ever was — the ball just didn’t cooperate.

It’s still very early in the new season (perhaps too early to put much stock into xG data), but Mané appears to be off to a hot start. He currently ranks joint second on the xG per 90 minutes rankings, and unlike last season, the ball is actually going into the goal this time around. That’s a good sign for Liverpool, which sits atop the Premier League table and its Champions League group. It’s amazing what a healthy back line can do for a team — but don’t underestimate the impact of a luckier Mané.

Check out our latest soccer predictions.

Every baseball fan should know these Negro League stars | FiveThirtyEight