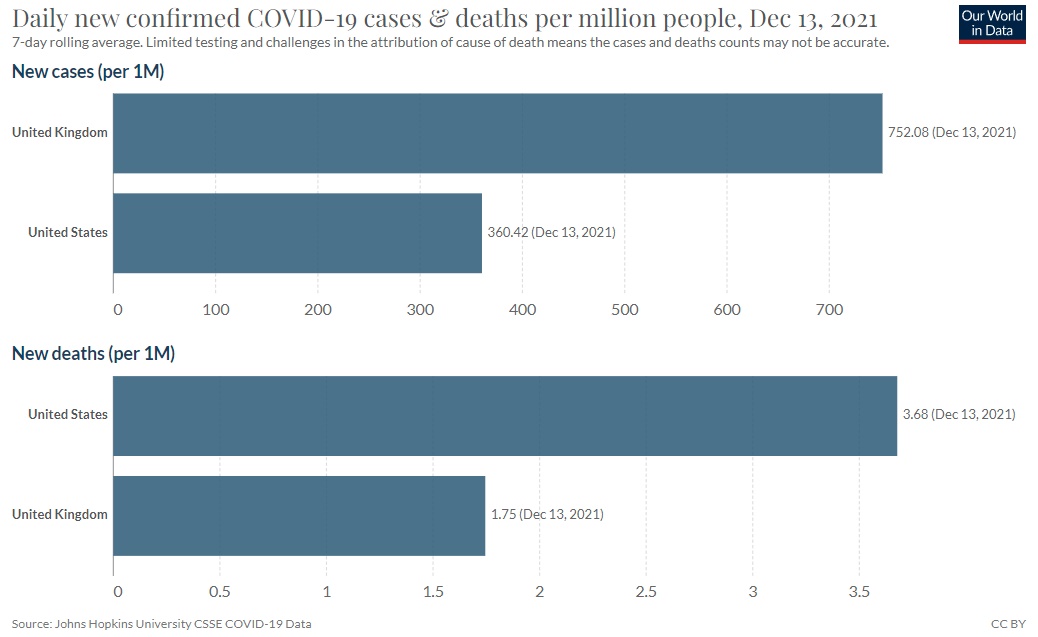 On Tuesday, the National Hockey League announced a “pause” in its schedule, delaying all games until next week as it considers appropriate action to take in addressing the rising number of cases. This follows on a series of growing cancellations that stretch from Broadway to college basketball.

The U.S. has been riding on a wave of delta variant cases since July. That first wave peaked around Sept. 1, but it never really settled back to anything like the level of cases that preceded delta’s appearance. Instead, following a pattern seen in the U.K. and elsewhere, the number of cases in the U.S. never fell below an average of 70,000 new cases a day, and the number of daily deaths barely dipped below 1,000 before both numbers began moving up again in November.

The U.S. was already involved in a winter surge, one that was likely to see case counts back to close to where they were in the winter of 2020 before omicron appeared. How the new, fast-spreading, highly infectious variant will affect the ultimate shape of the pandemic over the winter isn’t clear. However, across the nation and around the world, hospitals are bracing for an influx of COVID-19 patients that could well exceed the worst horrors of 2020.

When it comes to the percentage of people who develop symptomatic illness after exposure to omicron, the numbers are not significantly different than with delta. When it comes to the percentage of those people with symptomatic illness who need to be hospitalized, the numbers are not significantly different. Right now, the percentage of people dying is considerably less, but then, one of the most frequently used measures of case fatality is deaths within 28 days of infection, and it hasn’t even been 28 days since omicron was first identified. Hopeful claims that deaths from omicron are lower than they are with delta are just that: hopeful claims. We’re still weeks away from knowing the truth.

That close alignment between vaccination and survival means that small differences in vaccination rates can make a huge difference in serious cases of COVID-19, the burdens on ICUs, and the number of deaths. At the end of 2020, the cumulative rate of deaths in the United States was 1.9%. Over the first half of 2021, the cumulative rate of deaths 1.6%. Over the last six months the rate has been 1.1%. Almost all of that difference is in vaccination. The unvaccinated have died from COVID-19 over the last six months at almost the same rate that people were dying in the second half of 2020. The limited availability of monoclonal antibodies and the limited effectiveness of other treatments means that vaccines, and vaccines alone, are the greatest determining factor in reducing COVID-19 deaths.

For all that the U.K. has done wrong—a long list of criminally negligent behavior that includes dropping most social distancing measures even though the delta wave had already begun—data from that nation indicates that they are doing three things right: a higher level of testing; a higher level of sequencing to detect the variant; and most of all, a higher level of vaccination.

Note that this rate of deaths is not a rate against cases, where the higher level of case reporting might be giving the U.K. an edge in percentage of deaths. These numbers show COVID-19 deaths per 1 million people in the population overall. People in the United States are simply dying from COVID-19 much more frequently than in the U.K.

However, there are nations where the vaccination rate is almost identical to the U.S., but which still manage to have a much lower rate of deaths. Israel, for example, has just 1% more of its population fully vaccinated, but has a rate of deaths at just 0.34 per million—literally over 10 times better than in the U.S.

How is that happening? It’s happening using the tools that made South Korea and other nations so successful in the first stages of the pandemic: effective widespread testing and case management. In addition, Israel has adopted a “Green Pass” system of vaccination passports, maintained limits on large gatherings, and required masks across a whole range of settings. They are now stepping up their requirements and expected to add both vaccine mandates and an expanded use of the Green Pass.

Unfortunately, in spite of everything, omicron doesn’t seem to be moving the U.S. toward closing the gap on vaccination. In a new survey from the Kaiser Family Foundation, news on omicron seriously worried a majority of Americans who have already been vaccinated, and increased the determination of those who hadn’t yet received a booster to do so. But then …

Despite warnings of a tsunami of omicron about to crash down on the nation, and the data that shows being vaccinated means up to a 60 times reduced chance of dying, the unvaccinated are determined to stay unvaccinated. Don’t expect those U.S. death numbers to decline any time soon.