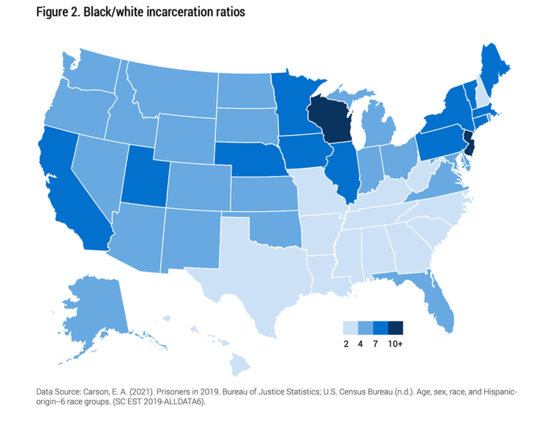 Just 6% of the population in Wisconsin is Black. Yet 42% of adults incarcerated in Wisconsin state prisons are Black. The rate of imprisonment is staggering: Black adults are imprisoned in state facilities nearly 12 times the rate of white Wisconsinites.

The statistics are vastly different for Latinx adults, as they comprise 8% of the state prison population and make up 6% of the overall state population. The study notes there is frequently a disparity in data when accounting for incarcerated adults who are Latinx, meaning that number could easily be higher than previously reported.

Problems with data extend to four states in particular that don’t account for their Latinx state prison population: Alabama, Maine, Michigan, and Vermont.

Already, the report has raised concerns about incarceration in states like Kansas. On Wednesday, the Kansas City Star issued a staff editorial condemning the high rate in which Black Kansans find themselves imprisoned in state facilities. The rate of Black adults incarcerated in state prisons in Kansas is six times higher than for White adults.

“Kansas officials must take steps to reduce the state’s minority prison population,” the editorial notes. “For starters, minor infractions that send substance abusers and others to prison must be decriminalized.”

The report calls for similar reforms, along with enacting proportional sentencing and implementing racial impact statements, which allow for lawmakers to seek alternatives to harsh punitive legislation and consider their outcomes. This could all be achieved with the passage of bills like the First Step Implementation Act and the drafting of new legislation that explicitly focuses on racial impact statements.