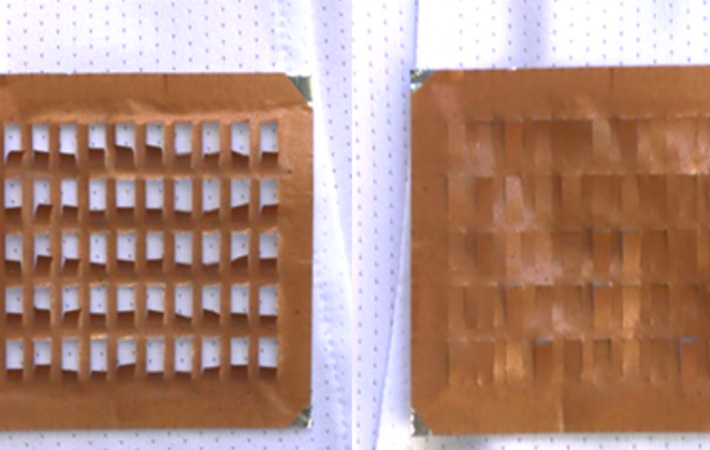 A light-weight material that traps thermal energy when dry, but opens a series of tiny vents to let heat escape when a person starts sweating has been developed by material scientists at Duke University in the United States. The vents close again to retain heat once they are dry. The approach was mentioned in a recent issue of the journal Science Advances.

Using physics rather than electronics to open the vents, the material has potential as a patch on various types of clothing to help keep the wearer comfortable in a wide range of situations, a press release from the university said.

“People who are skiing or hiking in colder weather usually wear layers so they can adjust how much heat their clothing is trapping as their body heats up,” said Po-Chun Hsu, assistant professor of mechanical engineering and materials science at Duke.

A light-weight material that traps thermal energy when dry, but opens a series of tiny vents to let heat escape when a person starts sweating has been developed by material scientists at Duke University in the United States. The vents close again to retain heat once they are dry. The approach was mentioned in a recent issue of the journal Science Advances.

“But by strategically placing patches of a material that can let out heat when a person is sweating, one could imagine making a one-piece-fits-all textile,” he said.

When first attempting to make such a dual-purpose material, Hsu turned to nylon. It is inexpensive, lightweight and soft, and Hsu knew that if cut into flaps, nylon curls in on itself a little bit when one side is exposed to moisture.

Nylon is not, however, known for making particularly warm clothing, so Hsu added a layer of heat-trapping silver on top. Expecting the weight of the silver to bog down the nylon flaps, he tried to make the layer as thin as possible. But to his surprise, the silver addition actually made the flaps curl back even more.

After experimenting with various thicknesses of silver, Hsu discovered a Goldilocks spot around 50 nanometers—2,000 times thinner than a sheet of paper. Any thinner and the phenomena wouldn’t be as strong. Any thicker and the weight of the silver started interfering with the vents opening.

Puzzled as to what exactly was happening on his lab bench, Hsu turned to Cate Brinson, the Sharon C. and Harold L. Yoh, III distinguished professor and Donald M. Altstadt chair of mechanical engineering and materials science at the university.

Brinson and her graduate student Boran Ma explained that when the bottom layer of nylon gets wet, it wants to expand like a sheet being pulled from its sides. But because it is attached to the silver on top, it cannot stretch in those directions. The easiest option remaining is for the two-layer material to curl up, allowing the nylon to expand while forcing the silver to shrink.

Compared with an average traditional textile represented by a blend of polyester and spandex, the material is about 16 per cent warmer when dry with the flaps closed and 14 per cent cooler when humid with the flaps open.

Put together, the nylon-silver hybrid can expand the thermal comfort zone by 30 per cent.

According to Hsu, this approach has advantages to existing methods of venting heat through warm clothing, such as placing zippers beneath the armpits.

Moving forward, Hsu is working on making the vents as small as possible while retaining their effectiveness. He’s also exploring using a top nanocomposite layer that could make the material any color without changing its thermal attributes.