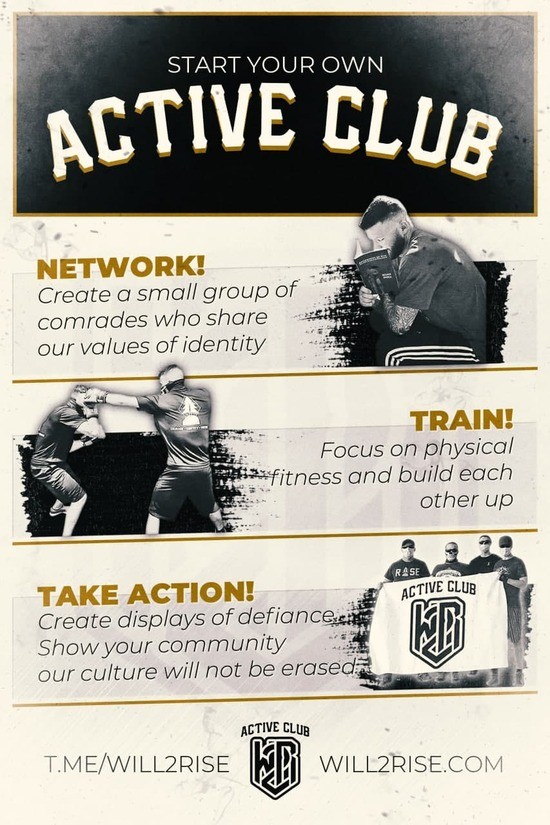 The clubs, which Rundo appears to be organizing from various countries where he is currently living abroad as a quasi-fugitive, are specifically geared toward recruiting angry young white men with a taste for violence and white nationalist slogans. The primary Telegram channels where they are organized are called Will2Rise and Active Club.

“As most institutions give little or no regard for white youth today, Active Clubs’ role will fill that gap,” Rundo wrote at Active Club. The clubs emphasize identity formation—one widely shared flyer urges participants to “Create a small group of comrades who share our values of identity”—and camaraderie, with the intent to “awaken racial bonds between kin.”

In addition to engaging in fitness activities such as weight training and combat sports training, the clubs also promote the “thrill and excitement” of spreading fascist propaganda in the form of flyers, stickers, and graffiti. “Create displays of defiance. Show your community our culture will not be erased,” the same recruitment flyer reads.

On his Active Club Telegram channel, Rundo advocated spreading their message through propaganda posters and stickers, which he said would act as a “critical revelation,” letting “our own know the fight is not over.”

“The active club is not so much a structural organization as it is a lifestyle for those willing to work, risk and sweat to embody our ideals for themselves and to promote them to others,” Rundo theorized on his Active Club Telegram channel. “The active lifestyle is the counter to the left’s culture of apathy, addiction, and vice. Get active today in your area and be the change you want to see.”

Rundo also created a video site called Media2Rise, which he envisions as a place to “counter” liberal narratives. One of the first videos he created for the site was a propaganda “documentary” extolling the virtues of the fascist organization Patriot Front.

According to Right Wing Watch, Rundo’s active clubs have sprung up in Colorado, Florida, Indiana, Massachusetts, and New Hampshire. Active clubs have formed in Canada as well, with an Ontario group recently renamed “Action 14,” a reference to a neo-Nazi slogan.

Rundo appears to be organizing the clubs from abroad. As Owens reports, his last known whereabouts was Bosnia and Herzegovina, after local authorities kicked him out of Serbia in March. He has claimed in chats that he was placed on a “no-fly list” that forced him to spend “a few months” getting out of the U.S. and into Eastern Europe.

His tenuous status abroad is a product of his career as a neo-fascist organizer, one that dates back to at least 2017, when he and other members of their California-based fight group, the Rise Above Movement (RAM), participated in brawls at a pro-Trump rally in Huntington Beach and at a Proud Boys event in Berkeley. Fatefully, Rundo and his fellow RAM members also flew to Charlottesville in August 2017 and played leading roles in the lethal violence that ensued.

More than a year later, federal authorities arrested four RAM members for conspiring to riot in Charlottesville; the men eventually entered guilty pleas. As prosecutors observed in a sentencing memorandum: “RAM’s goal when they attended these rallies was simple: They sought to provoke physical conflict, or—even better—they looked for any reason to serve as an excuse which they believed would justify their use of violence against their ideological foes.”

Three other RAM members, including Rundo, were indicted by a federal grand jury the next month in 2018 on similar charges. However, the judge hearing their case threw out the charges in 2019, ruling that the Anti-Riot Act of 1968, on which prosecutors based their charged, was facially overbroad in violation of the First Amendment.

Rundo was freed, along with three other RAM members, and promptly began organizing his “active clubs” as his primary recruitment project, but he appears also to have left the country around this time. In the meantime, the members of RAM who had pleaded guilty attempted to have their convictions overturned, but the U.S. Supreme Court declined to hear their case.

Moreover, an appeals court this fall overruled the 2019 dismissal of the charges against Rundo and his three cohorts: Aaron Eason, Robert Boman, and Tyler Laube. The three-judge panel of the U.S. 9th Circuit Court of Appeals in Pasadena found that provisions of the Anti-Riot Act are, in fact, constitutional.

The panel wrote that “the freedoms to speak and assemble which are enshrined in the First Amendment are of the utmost importance in maintaining a truly free society. Nevertheless, it would be cavalier to assert that the government and its citizens cannot act, but must sit quietly and wait until they are actually physically injured or have had their property destroyed by those who are trying to perpetrate, or cause the perpetration of, those violent outrages against them.”

Rundo and his cohorts were briefly wanted men, but attorneys for the four men filed an appeal of the ruling with the Supreme Court. While they await a decision on whether their case will be heard, Rundo is free to travel.

Since moving to Eastern Europe, Rundo’s activities have included founding the International Conservative Community, a propaganda outfits that boasts a network connecting neo-Nazis around the world. The ICC, which is also involved with the fundraising and propaganda campaigns for Kyle Rittenhouse, the Illinois teenager who gunned down three protesters in Kenosha, Wisconsin, in 2020, has active groups in Greece, Poland, Sweden, Hungary, Russia, and Canada.

Despite his precarious legal situation, Rundo continues to espouse his vision for the evolution of white supremacy on Telegram. Notably, he has clearly learned from his mistakes with RAM, and has now reshaped his strategy more in the mold of the old far-right “leaderless resistance” model, comprised of individuals and small local cells, with a disattached national leadership insulated from arrest for the actions of individual cell members.

Rundo calls it “white nationalism 3.0.” In his vision for the movement, groups are local, self-contained, and judicious about their public and online presence. Rather than taking part in rallies and demonstrations where they can be identified, now they stick to training and fitness activities, and focus instead on spreading propaganda—stickers, posters, and banner drops, much in line with Patriot Front’s stated strategy.

“Rundo seems to be attempting to expand his reach. Rundo has indicated that he sees many white, male Trump supporters as potential new recruits into militant white nationalism, due to the disillusionment and persecution they feel under the current U.S. administration and mainstream cultural climate,” wrote the nonprofit public interest group Advance Democracy in a report on Rundo’s activities. “Media2Rise’s content is already being shared by channels on Telegram which appear to cater to a highly conservative U.S. audience.”

In particular, Rundo’s emphasis on mixed-martial-arts-style fighting as a medium for spreading neo-Nazi ideology carries all the classic appeal of old-style fascists, but for a new generation of young white men: an aesthetic of violence, a contempt for weakness, profound misogyny, and visceral racism. But it wraps the package in the fraudulent imagery of uplifting “oppressed” young people.

“Messaging that comes across in these nationalist expressions are also about aspirational qualities like solidarity, honor, courage, trust, loyalty, and brotherhood,” Cynthia Miller-Idriss, author of Hate in the Homeland, told Owens. “I think that’s a really important part of why people are attracted to these movements. People think it’s just because of hate, but often they are attracted to the idea of being part of something.”