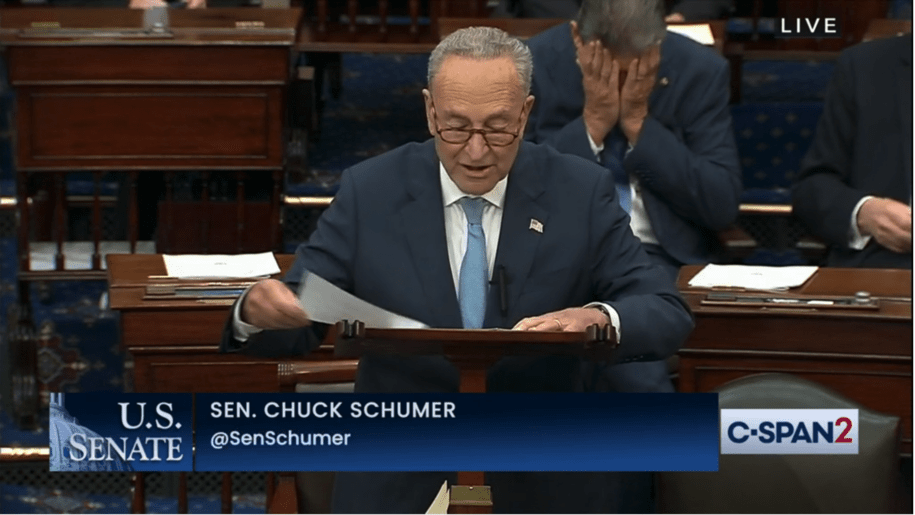 Sen. Joe Manchin helped Mitch McConnell seize a rhetorical victory from the jaws of defeat, again, on Thursday, helping Republicans flip the narrative from the utter disarray in the GOP and their Trump-incited nihilistic efforts to blow up the economy. Instead, largely thanks to Manchin’s melodramatic antics—from his strategically placed seat in the front row—and performative flounce, the narrative became Majority Leader Chuck Schumer’s “mean” speech.

Manchin then made sure that all the reporters on Capitol Hill heard that he thought Schumer’s speech was “inappropriate.” Manchin is apparently never around when McConnell’s floor speeches call Democrats obscene and accuse them of coddling terrorists. Because if you want to hear some partisan vitriol from the Senate floor, tune in to any of McConnell’s remarks.

And what was so offensive about Schumer’s remarks? He told the truth. He said a “risky drama” that played out this week could have resulted in “a first-ever, Republican-manufactured default on the national debt.” He continued, “Republicans played a dangerous and risky partisan game, and I am glad that their brinksmanship did not work. […] For the good of America’s families, for the good of our economy, Republicans must recognize in the future that they should approach fixing the debt limit in a bipartisan way.”