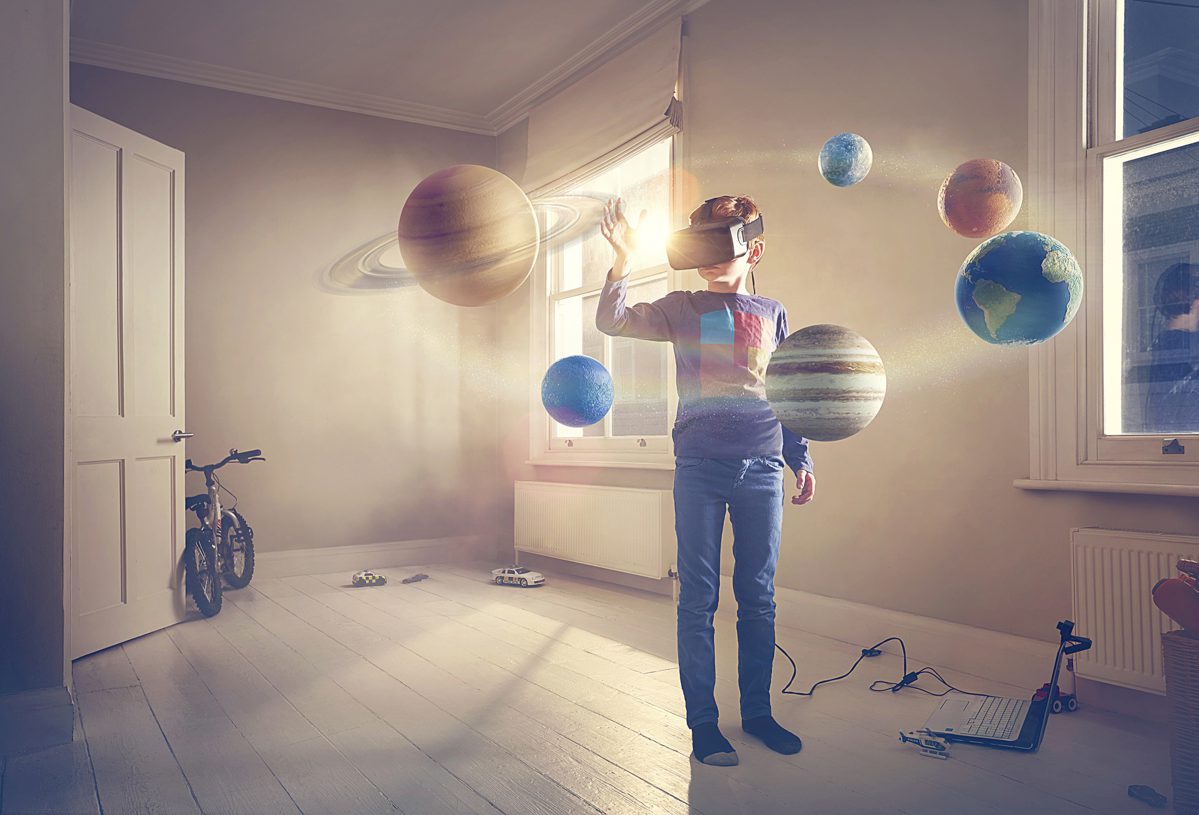 Whether you find yourself playing VR golf with your coworkers after a big virtual meeting or getting caught up in an NFT heist about bored apes, tech in 2022 is about to get real weird for all of us. You’d best get educated now.

If 2021 was the year to know about fancy TV features like refresh rates, 2022 is the year to brush up on screens that sit a lot closer to our faces. Like it or not, tech companies like Sony, Meta, and Apple are making big pushes for VR adoption for both work and play. So, yes, you’ll have to learn what the heck the “metaverse” is. On top of that, people like Eminem are spending ungodly amounts of money on JPEGs that may or may not be vehicles for cryptocurrency scams, so you should probably come to grips with the blockchain and NFTs, too.

Sure, 2022 may not look quite like the Jetsons-esque utopia you imagined it could be as a kid, but there’s still plenty to look forward to in the coming year. Instead of retreating to the woods, take a few minutes to learn these terms so you can navigate the months ahead.

Last fall, Facebook hosted a dizzying livestream to show off its vision of the future; a future which largely involves spending a lot of time wearing Quest headsets. At the end, CEO Mark Zuckerberg revealed Facebook’s new name, Meta. Was this a way for Zuck to distance future products and services from his eternally scandalous social network? Probably. But it also brings us to the one tech term you might hear more than any other in 2022: Metaverse.

Put simply, the metaverse is a persistent virtual world where people can work, play, and shop from anywhere using a virtual reality headset, augmented reality glasses, a phone, or any other compatible device.

The vision advanced by Zuckerberg and other metaverse proponents (like the individual who recently spent $450,000 to “live” next to Snoop Dogg’s virtual mansion) has people existing as customizable 3D avatars who can go from a meeting in a fake boardroom to surfing on a virtual beach in a matter of seconds. Just think: You could be interacting “in-person” with your coworkers who are thousands of miles away while shopping for a digital t-shirt you can only wear in the metaverse.

It’s all very lofty and ambitious, and has just as much potential to be a dystopian capitalistic nightmare as it does to revolutionize working and socializing. No matter how you feel about the metaverse, though, you won’t be able to ignore it in 2022.

While you’ve almost certainly heard of virtual reality — more commonly known as VR — there’s never been a better time than now to refresh your knowledge about it. After all, if the metaverse plan pans out, we could all be spending more time in VR than we would like to, especially if it becomes a regular part of work. Not exactly the virtual future you expected, right?

Anyway, VR is a blanket term for entirely digital spaces that folks can use special hardware, like the Oculus Quest and Valve Index headsets, to access. This isn’t the same as booting up your PlayStation and running around in Grand Theft Auto on your TV. These headsets use special lens technology, cameras, and motion-tracking controllers to fully immerse you in their computer worlds, making things seem real even when they’re not. VR can be used for everything from headshotting zombies and foul-mouthing your way through virtual escape rooms to visiting decades-old versions of your neighborhood.

Or you can just use it to fly around in a lawless, meme nightmare like VR Chat, a social networking VR app that would instantly kill someone from the 1800s if they saw it.

Another technology that’s entirely separate but (in ways you’ll understand shortly) is absolutely related to VR is augmented reality, or AR for short.

The idea of augmenting reality has serious 1970s sci-fi vibes to it but, in practice, it’s usually a lot more innocuous than that.

Basically, AR is a way to place and anchor digital objects in the real world. Of course, they’re not actually appearing in physical spaces, but your phone screen or AR glasses make it seem like they are. Remember the heady days of summer 2016 when it seemed like everyone in the world was obsessed with Pokémon Go, the mobile game that placed Pikachu on the sidewalk in front of you? That’s probably one of the most mainstream uses of AR. The same goes for those silly effects filters you use on Snapchat.

Of course, AR has the potential for much more. Interior decorators could use it to virtually place furniture in a room before it actually arrives and doctors can use it to see the veins in someone’s arm so they don’t miss an injection. But also, Pikachu can be on your desk. That’s important too.

As big tech ramps up its metaverse (or metaverse-adjacent) plans, the term “mixed reality” is going to get thrown around from time to time. Yes, this is a distinct term from virtual reality and augmented reality, but if you understand both of those things, you’ll easily get what mixed reality is all about.

A simple way to think about mixed reality (abbreviated as XR) is that it’s kind of a mix of VR and AR. An XR device, like Apple’s rumored upcoming headset, would allow users to fully immerse themselves in a VR world but also see the real-world environment around them, with virtual objects on top of it if they want to.

While Apple itself reportedly has no metaverse ambitions, a true mixed-reality headset would enable virtual interactions in real spaces.

Perhaps, one day we’ll all wear XR goggles for more immersive work and shopping experiences on the go. Whether that happens or not, it’s best to familiarize yourself with the concept now.

Our next two terms to know in 2022 — blockchain and NFTs — go hand-in-hand and you’ve likely heard of at least one of them many times by now.

The blockchain is a years-old concept and NFTs blew up in 2021, but according to experts, you’ll hear way more about them this year.

Without delving into the technical aspects of the blockchain (which would take thousands of words), it’s best understood as a virtual public ledger where assets can be owned, traded, and tracked transparently, and without alteration by those with devious intentions. It’s decentralized, meaning no ultimate authority holds power over it. The same is true of cryptocurrency, which is decentralized virtual money that uses blockchains to facilitate and track transactions.

This brings us to NFTs, or non-fungible tokens.

Think of an NFT as a unit of cryptocurrency that is totally unique to the owner, like a virtual collectible baseball card. People spend money on NFTs in several forms, but most commonly the idea is to have an immutable receipt of ownership over a piece of digital art. For some, the goal isn’t simply to patronize the artist and appreciate the art. Rather, the hope is that, over time, the NFT will appreciate in value and can be sold again at a higher price.

Of course, since NFTs don’t exist in the real world, anyone can simply right-click and save a piece of NFT art without spending thousands of dollars to stake a claim in it. The NFT world is also fertile ground for scam artists, who can sell stolen art, steal money, and do all sorts of other wild things.

Let’s step back from the world of suffocating VR spaces and internet funny money to focus on something a lot more conventional: Listening to music.

While it might not matter to most regular folks who just want to load up their running playlist on Spotify, streaming audio quality has never been as good as listening to a hard copy of a vinyl album. Common audio formats like MP3 compress songs down to reduce file sizes, which results in data loss, producing inferior quality. “Lossless” audio formats like FLAC exist to restore that data and make songs sound how they’re supposed to sound.

Tidal has offered a lossless option for a while now, while Apple Music and Spotify announced plans to support it in 2021. So far, only Apple had made good on that promise… Spotify hasn’t yet. Given that Spotify is one of the most popular music streaming platforms with more than 170 million paid subscribers (and a year-end Wrapped feature that dominates social media), it could have the power to push lossless audio to the mainstream if and when its HiFi service tier launches this year. Will it be expensive? Probably, but that’s the price you pay for quality.

We understand that all of the above is a lot to take in: Work meetings in VR? People spending thousands of dollars on jpegs of cartoon apes? Snoop Dogg owning a virtual mansion? This may not be the future you wanted, but it’s the future you have for the moment. Take a deep breath, try not to tie up too much of your money in crypto schemes, and be safe out there.