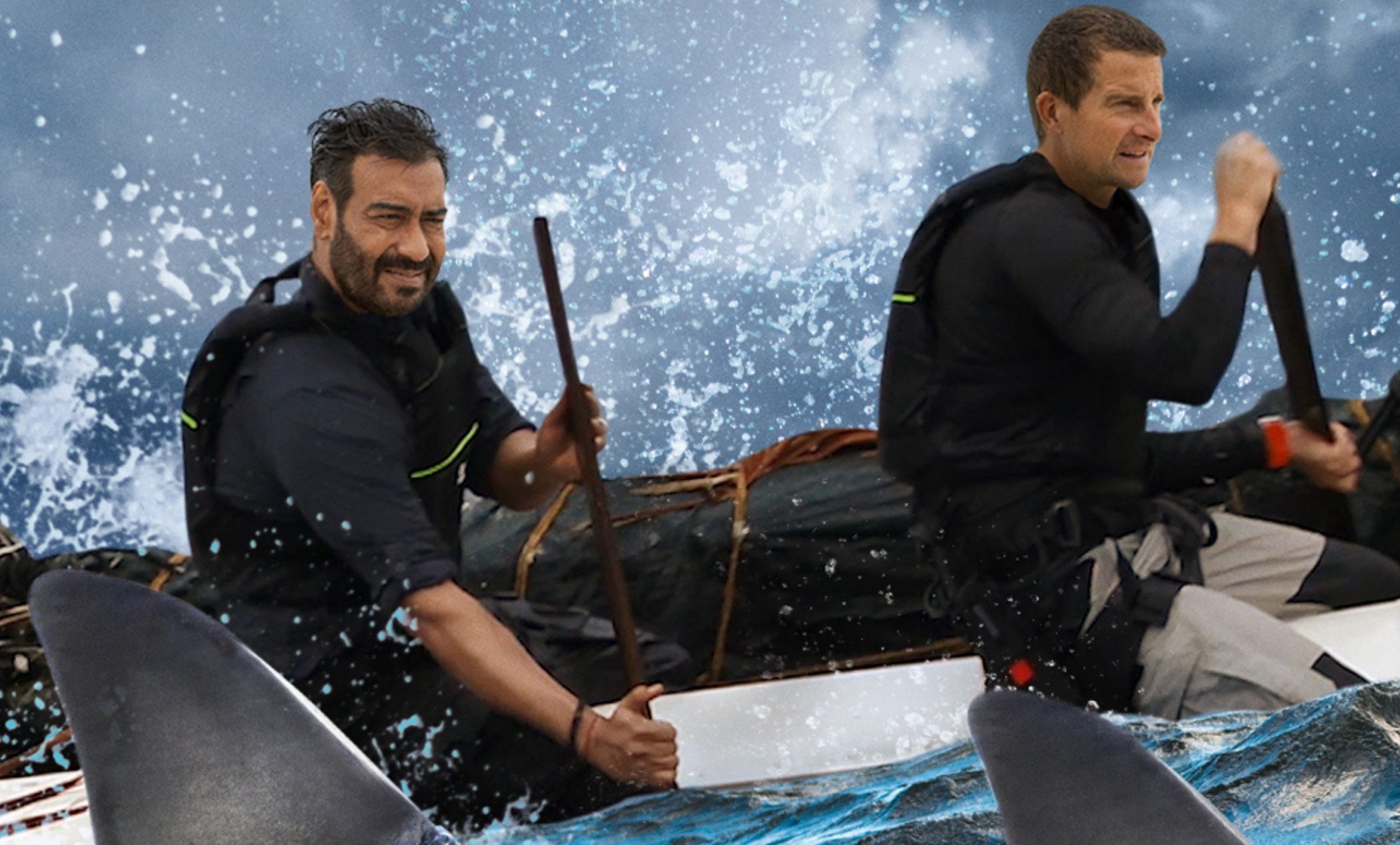 Ajay Devgn made his entry into Bollywood with a split and even after three decades, the image is fresh in the minds of the viewers and fans. And hey, can you blame them? It was and is still iconic today, making it one of the most iconic ways to foray into the world of films. Make no mistake; Devgn has done enough to live up to the reputation in his long illustrious career of making movies and doing his own stunts. That coupled with his magnetic screen presence and expressive eyes made him a fan-favorite and earned him the rank of a superstar. This is why we were thrilled at the first sight of Into The Wild with Bear Grylls & Ajay Devgn episode. Ace survival expert Bear Grylls + Bollywood’s very own Singham. What’s not to love, right? Well, turns out there is. Read the review below to find out if it is worth the watch.

Time for a confession: I’m a big fan of Man Vs Wild. The OG one that was synonymous with the name Bear Grylls. And why wouldn’t it be? Surviving the wild, beating the odds by fetching fresh water from filth, and eating thins that experimental foodies have later down Instagram videos about. The adrenaline was the stuff that adventure junkies dream about. Having said that, the newest iteration Into The Wild feels like a watered-down version of the former. It is tempting because we get to see stars like Akshay Kumar, Rajinikanth and even PM Narendra Modi venturing into the toughest terrains but the adventure gets reduced to a customized and carefully crafted package or jungle safari. And the current episode with Ajay Devgn isn’t an exception. With a side of forgettable fun and a few moments of unbridled feelings. Let’s get into it…

It was novel and refreshing to see Ajay Devgn–who is never seen without his mean machines on-screen and is rather discreet off it–jump right into the Indian Ocean without much hesitation. But just when one was about to give in to the new reality, the narrative switches lanes and is designed like an atmospheric thriller with shark montages. The danger is then played up with the help of a far-from-subtle background score. So much so that it felt like a scene from a Bollywood movie. An unrealistic one at that. Even the banter between Devgn and Grylls felt awkward where the actor admits to doing outdoorsy stuff like this for the first time. More than once. However, that is only until Devgn gets comfortable and starts to actually participate in the activities.

At one point the actor, when asked about the wild stuff he has done in his life, says that he has been in street fights and gotten intro trouble too. But he ended it by saying that he shouldn’t reveal any more of it on camera because “the times have changed.” And nothing rings truer because of everything that has been playing out in the prime-time news about Shah Rukh Khan’s son Aryan Khan and him supposedly “having a blast” at a party. But that is another article for another day. This is also when Devgn speaks of his father Veeru Devgan who he lost recently; he gets emotional talking about his early days on a film set with his father who was a stuntperson himself and later an action choreographer. It makes for an interesting sequence where the Tanhaji star talks about an era in films that owes its stunt doubles a lot.

The private person in him also opens up by then, 20 minutes into the episode, and is ready for the adventure he signed up for. The adventure, the viewer signed up for. He catches his own fish, on the instructions of Grylls and the cinematography comes alive at this point, discovery style. Unfortunately, that is about all the animal interaction the duo has on the remote island that has conveniently provided them a raft to turn it into a make-shift boat.

Now, although it was nice to see Kajol make an appearance virtually and give Ajay a challenge but it went downhill for me when she also reveals that he is “borderline OCD”. It almost the end of 2021, and we should refrain from casually dropping terms like OCD so casually. When the reality is a clinical diagnosis that has often wreaked havoc in the lives of the patients. And this is coming from someone who has seen her mother fight Obsessive Compulsive Disorder after getting diagnosed.

Also, it must be exhausting to be Bear Grylls, side-stepping and using his military training to coach Bollywood biggies to do what he gets them to do.

Only if you are an ardent fan with. Because the episode does give an insight into Ajay Devgn the person. But there is only so much of it. It doesn’t even score high on adventure. So, if you want to watch Ajay Devgn do thrilling stuff, you could watch a Rohit Shetty movie. You can now watch the episode on discovery+