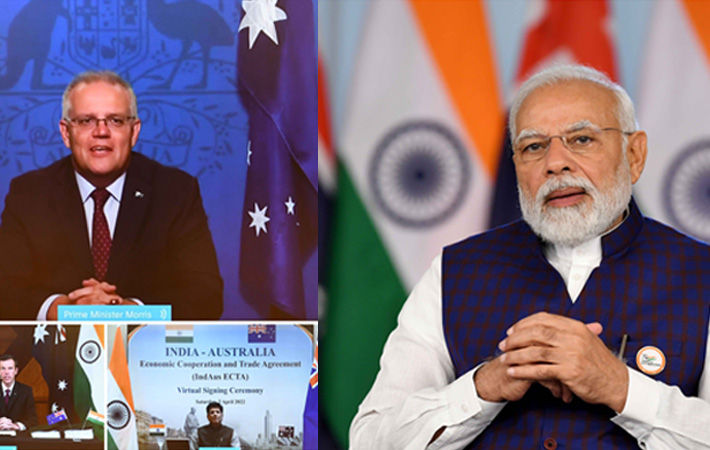 India and Australia last week signed an Economic Cooperation and Trade Agreement (IndAus ECTA) that is expected to offer zero-duty access to 96 per cent of India’s exports to Australia, including shipments from important sectors like textiles, apparel, leather and engineering goods. India estimates the pact to boost bilateral trade in goods and services to $45-50 billion over five years.

Zero-duty access for Indian goods is set to be expanded to 100 per cent over five years under the agreement, which is expected to generate over a million jobs in India, as per an Indian government estimate.

Bilateral trade is worth around $27 billion now. The agreement is expected to come into force after it is ratified by the Australian parliament.

India and Australia have signed an Economic Cooperation and Trade Agreement that is likely to offer zero-duty access to 96 per cent of India’s exports to Australia, including shipments from important sectors like textiles, apparel and leather. India estimates the pact to boost bilateral trade in goods and services to $45-50 billion over five years.

The agreement was signed by commerce and industry minister Piyush Goyal and Australia’s minister for trade, tourism and investment Dan Tehan in a virtual ceremony witnessed by Prime Ministers Narendra Modi and Scott Morrison.

The pact will also offer about 85 per cent of Australia’s exports, including coal, sheep meat and wool, zero-duty access to the Indian market, and reduced-duty access on Australian wines, almonds, lentils and certain fruits.

“This is indeed a watershed moment for our bilateral relationship,” Prime Minister Modi said, adding that the agreement would make it easier for both countries to exchange students, professionals and tourists, which in turn would strengthen ties.

Indian graduates in science, technology, engineering and mathematics will receive extended post-study work visas under the agreement. Australia will also set up a programme to grant visas to young Indians looking to pursue working holidays in Australia, an official release said.

It is the first free trade agreement that India has signed with a major developed country in over a decade. In February, India signed an FTA with the United Arab Emirates and is currently working on FTAs with Israel, Canada, the United Kingdom and the European Union.

India has, however, excluded a number of Australian products from tariff reductions under the agreement to protect ‘sensitive sectors’, including dairy products, wheat, rice, chickpeas, beef, sugar, apples, toys and iron ore.

Australia will benefit from zero-duty access on coal which currently accounts for about 74 per cent of Australia’s exports to India and currently attracts a duty of 2.5 per cent.

Other key Australian products which will benefit include LNG, wool, sheep meat, alumina and metallic ores while tariffs on avocados, onions, pistachios, macadamias, cashews in-shell, blueberries, raspberries and blackberries are set to be eliminated over seven years.