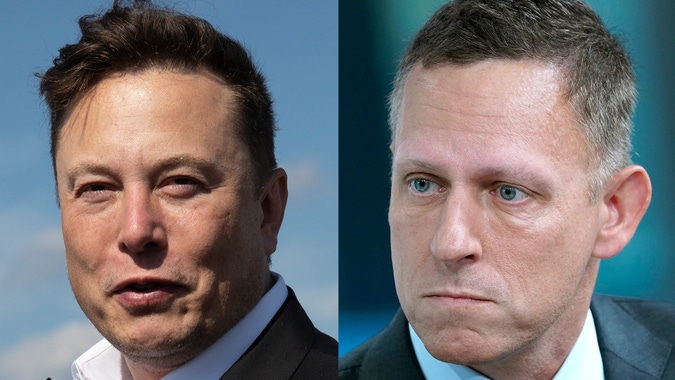 Peter Thiel and Elon Musk have known each other for decades, all the way back to when they combined their respective online banking companies, Paypal and X, in 2002.

Since then, their relationship has seen plenty of ups and downs and their networths have grown by billions of dollars. In his new book, “The Contrarian: Peter Thiel and Silicon Valley’s Pursuit of Power,” Max Chafkin takes a closer look at the complicated history of the two men, who are in many ways polar opposites.

Here are seven surprising details about Musk and Thiel that provide a glimpse into their long and often-fraught relationship.

1. A source who spoke to both men said that Musk thinks Thiel is “a sociopath,” and Thiel considers Musk “a fraud.”

Musk and Thiel, while longtime collaborators, are fundamentally opposites: Musk is considered an outgoing, eccentric risk-taker, and Thiel is known as a cautious introvert.

“Whereas Thiel could be comically secretive, even among close friends, Musk was incapable of censoring himself,” wrote Chafkin. “Whereas Thiel tended to think in terms of limiting risk, Musk was perpetually going for broke.”

2. Musk crashed his $1 million McLaren with Thiel in the passenger seat.

Soon after the PayPal-X merger, Musk and Thiel were on their way to a meeting with investors when Musk totaled the car while trying to show off its acceleration, “sending the McLaren flying into the air.” Thiel wasn’t impressed, seeing his business partner as “reckless.”

“The experience shook Thiel,” wrote Chafkin, “who came to see Musk as reckless; Musk saw Thiel as a money guy who cared about technology primarily as a means to profit.”

3. PayPal and X, Elon Musk’s own online banking platform, merged in 2000 because Thiel was “terrified of losing the business.”

As PayPal took significant losses in its early years, Musk stepped in. He’d caught wind that his competitor might make a deal with Yahoo and didn’t want X to be squeezed out — so, he convinced Thiel to combine their two companies.

But while Musk would be CEO, Thiel strategically placed loyal confidantes (members of his so-called “Paypal Mafia”) in the top positions.

4. Thiel and his allies conspired and overthrew Musk as PayPal CEO while he was on his honeymoon.

While Musk and his wife left on a two-week vacation, Thiel loyalists — fed up with what they saw as an endless list of disasters caused by Musk’s failed leadership — threatened to quit if the board didn’t agree to make Thiel CEO.

Musk told Chafkin that he eventually decided to forgive Thiel, but implied that he couldn’t fully trust him again.

5. The two billionaires each spent all or part of their childhoods in South Africa before landing at Stanford University.

Before they took over Silicon Valley, the two men came from similar roots. Musk was born in South Africa and lived there until college, and Thiel’s family relocated there for a few years when he was a child.

Musk originally planned on getting a PhD in physics at Stanford, “but dropped out to start Zip2, a business directory on the web that functioned as an online version of the Yellow Pages.” Meanwhile, Thiel studied law, dreaming of a Supreme Court clerkship — but was ultimately rejected after interviews with Anthony Kennedy and Antonin Scalia.

6. Musk said that Thiel refused to invest in Tesla partially because of his skepticism about climate change.

When Musk was trying to get his electric car company, Tesla Motors — worth over $800 billion by 2020 — off the ground, Thiel said no to investing. “He doesn’t fully buy into the climate change thing,” said Musk.

7. Thiel was instrumental in SpaceX’s success.

Even though their relationship was on the rocks following the PayPal coup and Tesla investment refusal, Thiel supported Musk’s aerospace company — albeit reluctantly — in its early stages.