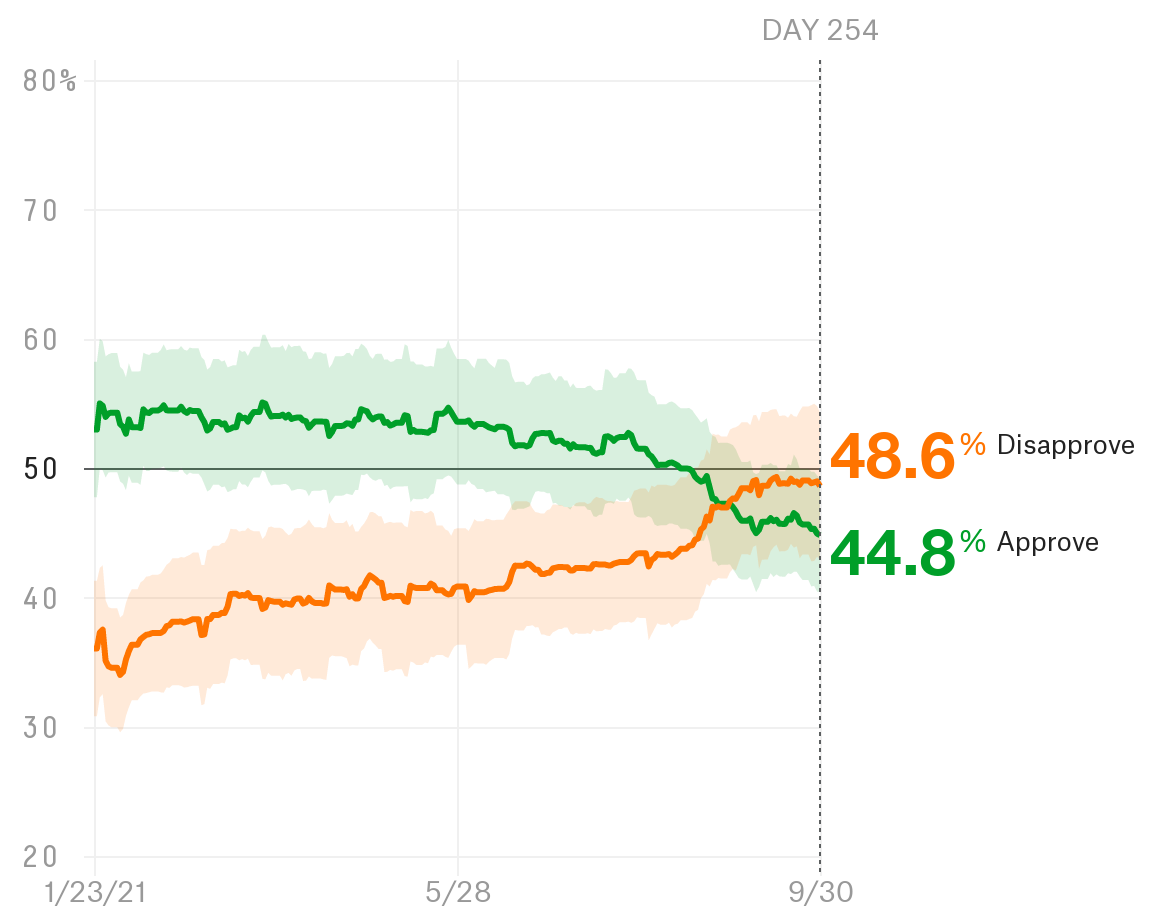 Democrats in Congress have their work cut out for them this fall. They were able to cut a deal with Republican lawmakers to avert a government shutdown, but when it comes to passing the rest of President Biden’s agenda, including both an ambitious $3.5 trillion spending plan and a bipartisan infrastructure deal, Democrats have much to sort out. It’s still too early to say how much jeopardy either bill is in — assessing Democratic intraparty divisions is difficult — but the fact that Senate Republicans have said they’ll refuse to help raise the debt ceiling creates a real legislative challenge for Democrats.

Earlier this week, Treasury Secretary Janet Yellen said the U.S. could run out of money as early as Oct. 18, making it impossible for the U.S. to pay its current financial obligations and creating a risk of debt default that she said would be a “calamity” for the economy. And because almost all Senate Republicans have indicated they won’t vote to raise the debt ceiling, they’ve now created a game of chicken in which they are arguing that Democrats alone must pass an increase through budget reconciliation, while Democrats counter that the GOP should join them in a bipartisan vote to raise it, which is generally how it used to work in the Senate.

Yet, at this point, a new poll from Politico/Morning Consult suggests public opinion may not push either party to change course, especially Republicans. Overall, 31 percent of registered voters said they would mostly blame Democrats if the country defaults on its debt, while 20 percent said they would primarily blame the GOP. However, the plurality (39 percent) said they would blame both parties equally, while 11 percent said they didn’t know or had no opinion.

Americans are also torn on whether to raise the debt ceiling, even though there could be severely damaging ramifications for failing to raise it. A survey conducted earlier this week by The Hill/HarrisX found that 54 percent of registered voters opposed raising the cap, while 46 percent supported the raise. (The poll didn’t include some kind of “don’t know” option, which, as we’ll see, may be important.) Meanwhile, a weekly poll from The Economist/YouGov found that 34 percent of adults favored raising it and 32 percent opposed, with the remaining 34 percent undecided. In both surveys, Republicans were strongly opposed to raising the debt ceiling, while Democrats were about as strongly inclined to support an increase. Independents’ stance on the issue was murkier, but the polls suggested that these voters were slightly more opposed to raising the debt ceiling than they were supportive of it.

However, it’s likely that many Americans don’t understand what the debt ceiling is or what raising it entails. Consider the high share of respondents who said they were unsure in The Economist/YouGov’s survey. Part of what’s tricky here is the debt ceiling refers to debt and financial obligations the U.S. has already accrued — such as interest on the country’s debt or previously authorized spending, like Social Security benefits. That is, the debt limit is not a tool that authorizes new spending, as such expenditures are decided in completely separate legislation, like a bill for the next federal budget.

Unfortunately, we don’t have recent polling that examines Americans’ understanding of the debt limit, but past polls back up the idea that many people don’t grasp what it is or what the risks are if it’s not increased. In a 2013 HuffPost/YouGov poll, for instance, 42 percent of Americans correctly responded that a higher debt ceiling allowed the country to pay interest on its debt and spending that’s already been authorized, but 39 percent mistakenly said that the debt ceiling directly increased government spending and the amount of debt the U.S. holds. This survey also found plenty of uncertainty, as 20 percent said they weren’t sure what raising the debt ceiling meant. A poll by the Washington Post/Pew Research Center from 2011 — when the debt-ceiling debate was particularly fraught — also reflected a misunderstanding of the consequences of raising or not raising the debt limit. In the poll, more Americans were worried about what would happen if the debt ceiling was raised than if it wasn’t: 48 percent were more concerned that raising the debt ceiling would lead to more spending and debt, while 35 percent were more worried that not raising the cap would force a debt default and cause economic harm.

The political consequences of the public’s general lack of understanding are important, though, because it may guide the parties’ position on the debt ceiling. And Republicans may benefit the most, as their current opposition to raising the debt ceiling might be viewed by voters as part of their rejection of Democrats’ spending plans. This comes despite the fact that the debt-limit debate is about paying off existing financial obligations — like previously authorized spending and interest on debt accrued by past administrations from both parties — rather than any future obligations that the Democrats’ budget proposal might generate. Just how the debt-limit fight will sort itself out in the coming weeks is unclear, but should neither party blink or come to a bipartisan resolution, the country would enter uncharted territory, facing potentially disastrous financial fallout. And in that case, the question of which party is to blame might be a lot more complicated for voters.