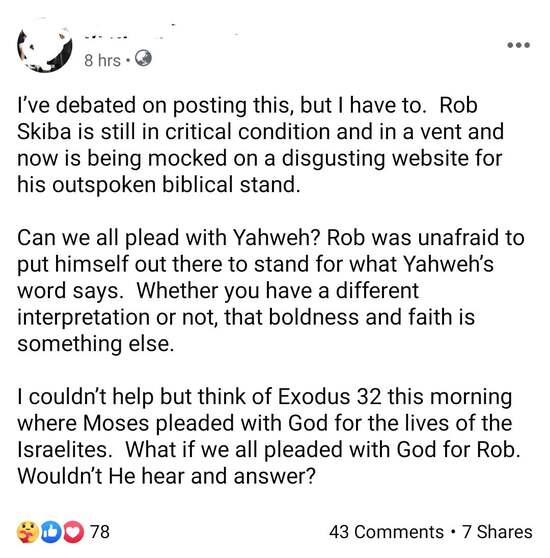 Let’s meet Rob Skiba. Rob is an evangelical Flat-Earther, which is a thing I can’t believe exits.

Rob Skiba is an award winning documentary filmmaker and the best-selling author of several books including: Babylon Rising: And The First Shall Be Last and Archon Invasion: The Rise, Fall and Return of the Nephilim. As an “ancient Nephilim theorist,” Rob brings a unique and often unheard perspective to the UFO/alien discussion.

What the heck is that Nephilim theory?

Nephilim, in the Hebrew Bible, a group of mysterious beings or people of unusually large size and strength who lived both before and after the Flood. The Nephilim are referenced in Genesis and Numbers and are possibly referred to in Ezekiel.

What does that have to do with UFOs and aliens? I checked out the Amazon description for his book:

Who or what is an Archon? What is “The Genesis Six Experiment?” Who were the Nephilim? How did they return both before and after the Flood? What differentiates the days of Noah from the days of Jared? Were there female Nephilim? Could the giants reproduce? Why should we be concerned about the act of mixing animal and human DNA? Why did Jesus say the Last Days would be like the days of Noah? Find out in this information packed book by Rob Skiba!

There are giants among us, passing largely unnoticed, intent on carrying out a secret plan to enslave all humanity. They may not look like giants today, but their bloodlines extend all the way back to the Nephilim-the offspring of angels who mated with human women-described in Genesis 6 when giants roamed the land.

Help me get out of this rabbit hole!

Anyway, what does any of this have to do with Flat Earth Theory? Apparently nothing. He’s just a fount of conspiracy theories. Here’s his summary of his Flat-Earth book:

This is a compilation of books written in the late 19th century. It includes Zetetic Astronomy by Samuel “PARALLAX” Rowbatham and 100 Proofs Earth Not a Globe by William Carpenter along with a Preface, Introduction and commentary throughout, written by Rob Skiba. It is dedicated to those willing to hear the whole matter; to those daring enough to entertain a thought, even without first accepting it and who have the guts to actually take the time to investigate the matter before condemning it. The subject is Flat Earth. If you dare to read this book from cover to cover, you will begin to see why this “taboo” topic is coming to the forefront once again, trending so high on Google and YouTube and why, believe it or not, you may actually know some “Flat Earthers” yourself (if indeed you are not already one too). Assuming one is willing to hear the whole matter before condemning, this book is sure to challenge even the most die-hard skeptic and at the very least give the critics something to think about.

See? You will read some books written in the 1800s and that will convince you the earth is flat. BUT ONLY IF YOU ARE OPEN MINDED.

More relevant to our topic at hand, vaccinations, you might be surprised to know that Rob was virulently anti-vaccine. (pun intended!) I found a video which I won’t link to, because I don’t want to mess up your YouTube recommendations. But here’s the description:

Rob Skiba (and others) discussed the possibility/plan of using a contrived “pandemic” and mandatory vaccine as the “Mark of the Beast” years ago. Here is Rob at the Prophecy Club in 2013 talking about it:

Anyhoo, he got COVID. His Facebook fanatics can take it from here:

God is all-powerful and knows everything.

Also, God didn’t know about Rob being in the hospital, so let’s give him a heads-up.

Is this “new protocol” a vaccine? One that is proven to prevent the vast majority of serious hospitalizations, is free, and has minimal side effects in the billions that have taken it?

Too late for that one.

“Swept him away.” So nefarious sounding. He wasn’t swept away, though, as in “taken” or “kidnapped.” He was admitted.

I try to come up with something witty, or informative, or educational, but in the end, I’m left staring at the screen, slack-jawed in utter bewilderment that these people exist.

And then I remember: They believe the Earth is flat. And I’m left in even greater bewilderment.

5G radiation causes loss of taste and smell, which convinces people to vaccinate (Rob’s “mark of the beast” argument), which causes the low blood-oxygen level and blood clots. But somehow the virus exists, and it’s man-made, but COVID might not be real, so maybe not.

They are praying that God bring ol’ Rob back to life. As though that’s a thing that happens.

And then green is like “heck yeah, let’s bring him back to life, but … maybe he’s not dead?” And then they ask for the truth, with zero irony.

Well, we certainly are now aware of who Rob Skiba was. Or, maybe is. So, uh, assignment accomplished?