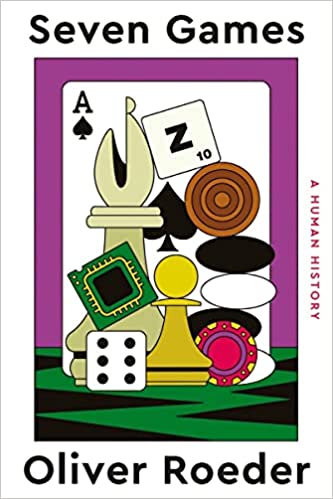 Oliver Roeder is a journalist, author and games player. He is a former senior writer for FiveThirtyEight, where he covered the World Chess Championship and other gaming pursuits. The following is adapted from his new book, “Seven Games: A Human History,” published by W.W. Norton. It’s in stores today.

I still remember the first board on which I ever played chess. It was an irregular and heavy slab of walnut, maybe 14 inches on a side, onto which green squares of felt had been carefully glued by hand. It was a homemade Christmas gift from my mother’s siblings to their father, my grandfather Jack. The felt had curled up at its corners after hosting decades of battle in a small farmhouse in eastern Iowa. The pieces, purchased by my grandparents on their honeymoon to Mexico in 1949, were slender, made of ebony and ivory. By the time I arrived, one of the knights had lost its head. The other knights, I thought, had a look of terror in their eyes. I remember the sharp spikes on the rims of the queens’ crowns and the neat, crenelated battlements of the rooks. I remember the clunk of the dense pieces on wood.

As a child, I spent every summer on that farm, jumping on hay bales and swimming and playing game after game of chess in the late-afternoon light. Grandpa Jack was a strong player, the wielder of a conservative and positional style. And as a matter of strict principle, he never let kids win. Therefore, every chess player in my family has a cherished memory of their first victory. When I finally beat Grandpa Jack, around age nine, I remember running into the kitchen to tell Grandma Shirley, who hugged me and who was, to borrow her word, tickled.

At first, I saw the game like a machine, not unlike the Mechanical Turk, that impressive 18th-century hoax of a chess-playing automaton, its parts moving and interacting according to complex yet intuitive principles. I took chess apart like a child disassembling a motor — curious and eager but mostly hapless and messy. Occasionally, the reassembled machine ran smoothly, and I won. More often, it sputtered out, and I lost. I was, to use my favorite chess insult, a woodpusher, curious about how the pieces worked. Experimentation was enough for me.

As I grew older, I grew fascinated with chess theory and studied diagrams of the intricate machine picked apart by countless tinkerers over hundreds of years. I would fall asleep reading the heavy reference book “Modern Chess Openings,” comforted and delighted by the fine- grained taxonomy and analysis of just the first few possible moves in a game, and the names they’d acquired — the Halloween Gambit, the Maróczy Bind, the Accelerated Dragon, the Hedgehog Defense.

Today I enjoy chess on an aesthetic level. My competitive career never amounted to much; my fourth-grade Greenwood Elementary championship remains its only highlight. I lacked skill, and, just as important, I lacked the obsession to internalize — to actualize — all those volumes of theory. But even if I’ve never stretched a canvas, I can still appreciate Rothko and de Kooning — appreciate the beauty in the picture. And one can appreciate beauty in a game of chess; it is art. Lengthy tactical combinations, complex and previously unseen, can, like music, unfold as if they were ordained. Essences of gnarly, complex positions can, like painting, be distilled and altered and presented in pure form.

My progression mirrors how we taught our computers to play chess. The earliest programs, gawkish code running on ungainly mainframes, were woodpushers, capable of playing chess technically but not well. Their successors, running on sleeker supercomputers or speedier modern desktops, had mastered theory — openings and endgames, as well as the sophisticated tactics of the middle game — and now played better than any human. And their successors, the latest evolution, ungodly chess beings sprung from the secretive labs of trillion-dollar companies, play a hyper-advanced alien chess, exotic and beautiful, something no human is capable of fully understanding, let alone replicating, but so full of awesome style.

I invite you to visit tcec-chess.com, home to an online arena called the Top Chess Engine Championship. Twenty-four hours a day, seven days a week, elite computer chess programs — with names such as Ethereal, Fire, Fizbo, Komodo, Laser, Winter, and Xiphos — play against each other there, and you can watch them live. The engines each run on four high-end Intel Xeon processors with eighty-eight cores, analyzing tens of millions of positions per second. You can watch them consider lines dozens of moves into the future and evaluate positions to the hundredth of a pawn. They constantly produce some of the best chess ever played. You can even, if you are so inclined, watch an insolent human commentariat chat about the programs’ games in real time:

“it blundered away a good position.”

But the machines don’t care, and they never stop playing.

One imagines a not-too-distant future, after the temperatures and oceans have risen and the coastal cities of the world have flooded and emptied, after the human population has migrated inland, after crops have died during droughts and species have gone extinct, after famine and economic collapse, where on a long-abandoned server, as long as the power holds out, the highest expression of our human culture, our last art, is created in chess games played in silence with no one watching.