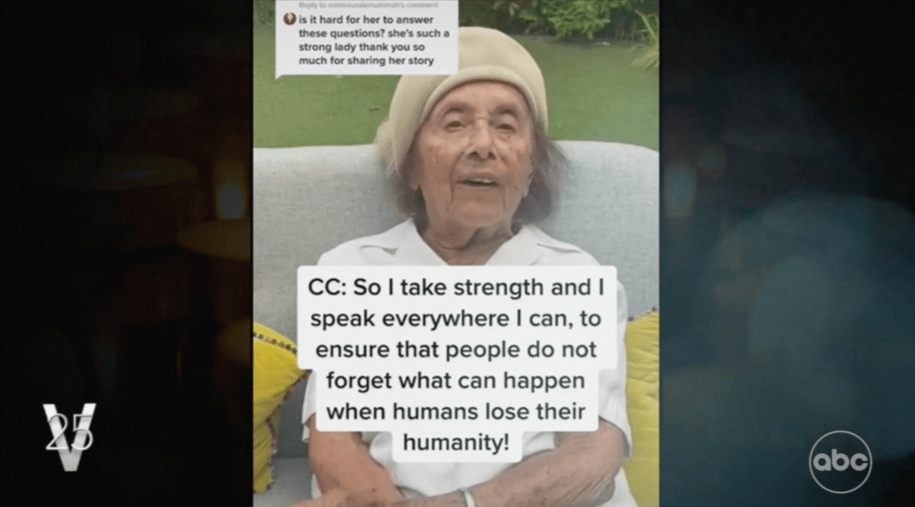 The social media platform TikTok continues to prove itself to be more than just a platform for viral dance videos and pranks. It now has one of its oldest users sharing the reality of the Holocaust through her story of surviving it. With three children, 10 grandchildren, and 35 great-grandchildren, 98-year-old Holocaust survivor Lily Ebert has taken to TikTok, accompanied and assisted by her great-grandson, Dov Forman, to share details of her experience in an Auschwitz concentration camp.

Forman, 80 years younger than Ebert, gave her the idea to heal her trauma by sharing her stories on the platform and educating others on Holocaust history. The goal of sharing her stories, Ebert said in one of her videos, is to ensure something as horrible as the Holocaust never happens again.

“I was really not sure that I would stay alive. It is a miracle that I am here. But I promised myself, however long I will be alive, and whatever I will do in life, one thing is sure: I will tell my story,” Ebert told CBS News.

Together, the two have quickly gained popularity on TikTok, with over 1.6 million followers.

“I was in Auschwitz for four months. Four months in a death camp. People would say, ‘Four months is not so long.’ But I will tell you something: even four months was too long,” she said in one video, adding in another, “In Auschwitz you were not afraid of death, you were afraid to live.”

The two also appeared on ABC News’ The View on Jan. 15 to comment on the recent rise of antisemitism across the country.

“What’s really saddening for me and for many other Jewish, young people across the world is that the antisemitism did not go away with the Holocaust. Unfortunately, antisemitism is on the rise throughout the world,” Forman said. “There was a recent study that found that over half of teenagers in the U.K. and in America do not even know what the Holocaust or Auschwitz was, and that’s why it’s so important for us to go on social media and educate about these important stories.”

My 98 year old great grandmother Lily Ebert, an Auschwitz survivor, has just become a great-grandma for the 35th time!

“I never expected to survive Auschwitz and start a family. Babies are the best revenge against the Nazis.”

I asked her if she remembers the transport.

She told me, ‘I can still see my little sister clinging to my mother – we had no idea what was ahead of us.’

This was, like millions of other European Jews, one of the last memories she would ever have of her family, together. pic.twitter.com/ZzNTzvirgA

But TikTok is not the only way the two are spreading awareness.

The two also cowrote the intergenerational memoir, Lily’s Promise. During this time, Ebert contracted COVID-19—causing the whole family to fear for her life.

Today she went on her first walk in a month after making a miraculous recovery.

“I remember specifically one moment when we were halfway through writing the book and I went to show her the first half and I said to her—we call her Savta because that’s “grandmother” in Hebrew—and I said to her, ‘Savta, this is the first half of the book. What do you think about it?'” Forman said, noting that she “really couldn’t talk” during that stage of recovery. Ebert “got up a bit from her bed and she said, ‘Wow. I’ve got to finish. I’ve got to get better. We’ve got to finish this book.'”

“That sums her up as a person. She’s a fighter and a survivor,” Forman added. “Our family, we learn from her. We held onto hope and we thought that things would get better and we were sure that she would fight. She did, and she survived.”

Together, Forman and Ebert have hopes to change the world. One TikTok at a time.