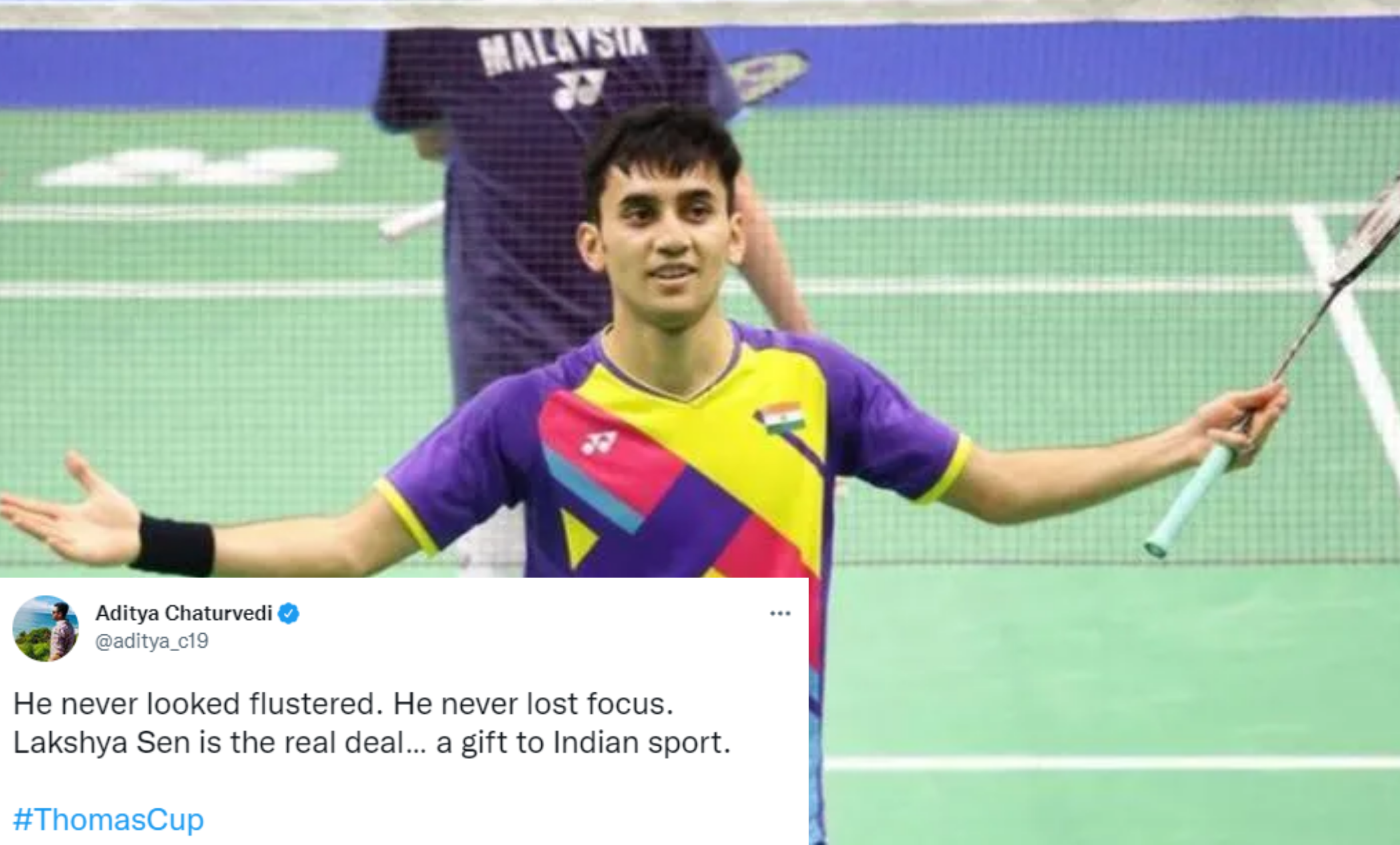 Lakshya Sen made a great comeback and scored a big win giving India a 1-0 lead in the final at the Impact Arena in Bangkok, Thailand. Sen beat Anthony Ginting 8-21, 21-17, 21-16 to give India a head start at the Thomas Cup 2022. Sen’s win against Ginting was huge as Indonesia is considered the most successful team in the history of the competition and also the defending champions.

SEE ALSO: Thomas Cup Final 2022 Live Streaming: India Vs Indonesia, When And Where Can You Watch The Epic Clash

But the Indian men’s team at Thomas Cup has shown phenomenal performances and has already bought down Malaysia and Denmark to make its first-ever final at the tournament. As Lakshya Sen got better of his Indonesian counterpart, Twitter erupted with joy and pride and called him the ‘hero of Indian sport’. Take a look at some reactions here.

He never looked flustered. He never lost focus. Lakshya Sen is the real deal… a gift to Indian sport.#ThomasCup

Losing the first game 8-21. Losing 12 points in a row. Down 7-11 in the final game. Up against the World No. 5 and Olympic bronze medallist. 99.9% of players would have given up. Thats why @lakshya_sen is in that 0.1% category where giving up is NOT an option

“It’s not how you start, but it’s how you finish.”

From losing the first set 21-8 to making a comeback in the second set and going on to win the decider 21-16. Played, Lakshya Sen.#ThomasCup2022

Make some noise for Lakshya Sen. This champion is hitting it hard to make us reach for success. #ThomasCupFinal2022 watching his progress on @justvoot for free. @lakshya_sen#VootForTeamIndia

Cometh the hour, cometh the man!!!!

The conditions were clearly against him, but he still pulls it out!!

Ginting wud be regretting the choice of ends at the toss though, giving Lakshya the “good” end at crunch time!#ThomasCup2022

What a start from Lakshya Sen for India 🇮🇳 in the final of #ThomasCup2022. Lost the first game badly and made a sensational comeback of 21-8, 17-21, 16-21 against a worthy opponent
Incredible and proud moment for a 20 yo!

Lakshya Sen has just come back from a game down to win vs Anthony Ginting, and given India the lead in the #ThomasCup Final. What a time to beat a higher ranked player for the first time in this tournament!

If you’re not watching, WHY? On Voot.

Lakshya sen was down 3-8 in the decider to win it 21-16, i aspire to have the mental strength this champ has ay 20. FREKING EXTRAORDINARY, 1 up, 2 to go for history #ThomasCup

Lakshya Sen, you thing of beauty. What an incredible comeback and what an astounding win! Man’s built different. #ThomasCup2022