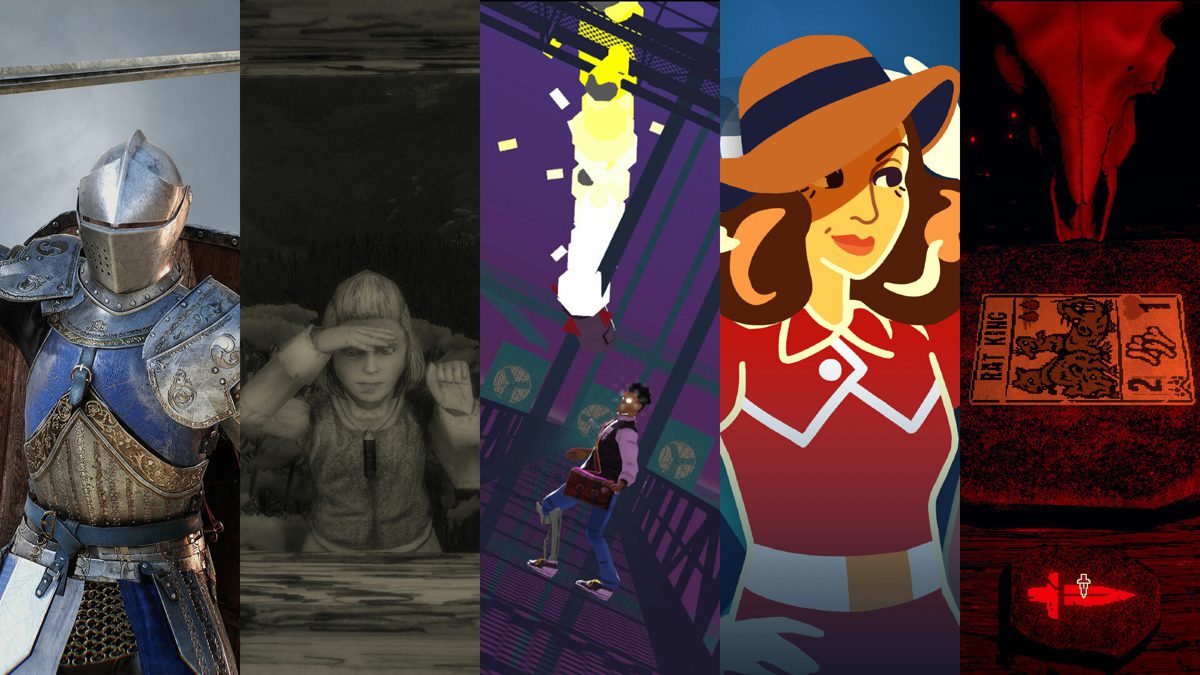 There’s never enough time in the year for all the games I want to play. Sound familiar?

Video game fans of all types can relate to the simple premise of there not being enough hours in the day to play everything. It’s why we have backlogs, even as most of us know we’ll never get through just 10 percent of what was missed.

Some of these games I started and never finished — a totally OK thing to do! — and some of them just sound rad for one reason or another. All of them deserve to vie for some of your precious time. So as you look ahead to a quiet few weeks of rest, recovery, and socially distanced celebrations, consider picking up one of these treasured hidden gems of 2021.

I have a mental block with deck-building games like Magic: The Gathering or Hearthstone. I’ve tried and tried, but they just aren’t my thing. So I was all ready to write off Inscryption, until the buzz got to be too loud to ignore.

That’s a good thing, because Inscryption is a revelation. It’s not so much a deck-builder as it is a puzzle game that’s built a little like an escape room. Yeah, you’re gathering cards. But it’s more that the central puzzle speaks in the language of deck-builders.

Even though Inscryption tailed off for me significantly in its second act — which does lean in harder on the Magic-style gameplay — the meta mindf*ck of a story has been beckoning for me to return ever since. Read as little as you can about this one; it’s too easy to spoil. Just fire it up and start playing.

Play it on: Windows

There’s an infinite supply of “endless runner” games, a genre popularized by the likes of Canabalt and Temple Run. So it takes something special to really stand out. Aerial_Knight’s Never Yield mixes style, aesthetics, and concept in a way that positively nails it.

Created by indie developer Neil Jones, Twitter’s Aerial_Knight, Never Yield stars a young Black man named Wally who has a prosthetic leg and a seemingly superhuman talent for physical movement and parkour. Wally is constantly on the run from people who want to harm him, and evading those pursuers requires a smooth and stylish mix of sprinting, sliding, leaping, and generally over-the-top acrobatics.

More than anything else it’s Never Yield‘s sense of style that makes it stand out. Art design that feels like street art in motion pair well with a funky jazz soundtrack that keeps your head bobbing as Wally puts his skills to work on staying steps ahead in a world that’s always trying to knock him down.

Chicory has been on my list of games to check out since the summer. It was heartily endorsed by Mashable’s own Elvie Mae Parian, an associate animator who has since struck out to pursue a different kind of creative endeavor. Elvie’s thoughts on Chicory immediately sold me when we first talked about it, and they’re worth sharing again here:

“Chicory: A Colorful Tale is a puzzle adventure game that comes from the just as colorful minds behind Wandersong. On one hand, although it looks like a simple, coloring game on the surface, it’s really a much deeper game about the artistic struggle! You play a dog that has to wield a giant, magical paintbrush to restore color to the world, all while solving puzzles and making many friends along the way. It’s such a joyous, lighthearted game that also doesn’t shy away from certain issues it explores through its quirky characters. It just goes to show that we all need a little more color while still going through these bleak times.”

Play it on: Windows, PlayStation

On my list of 2021 gaming regrets, Overboard! is at the top of the list. I simply didn’t play it. But knowing that Inkle Studios made it is enough.

The studio behind Heaven’s Vault and mobile fave 80 Days surprised many in 2021 with this twist on a cruise ship murder mystery that casts you as the villain. It’s not a long game, with a typical playthrough clocking in at around an hour by most accounts. But it’s built to be replayed.

It turns out that committing the perfect murder is hard work. The more you revisit the ship, the more details you pick up about this virtual world and the people who inhabit it. Knowledge is power, and in this case power is ultimately defined by your escape from doing a crime. Sounds like another delightful time from Inkle.

Here’s another one that skated right the heck past me. This first-person horror game from the Swiss studio Hidden Fields is notable right up front for its striking “hand-penciled” black-and-white art design. It pops immediately in every screenshot and trailer.

As friends keep screaming at me, however, there’s a stellar play experience tucked behind those visuals where you explore and solve puzzles as you work to uncover secrets in a valley that’s tucked away in the Alps. I don’t know much more than that, but the visually arresting presentation and deep cottagecore vibes do enough to make Mundaun stand out.

Outer Wilds, the outer space time-loop puzzle from 2019 got in a couple years ahead of what’s been a buzzy 2021 for time loops (looking at you Deathloop and Returnal), but that’s just one piece of what makes it great. In a world filled with puzzle-based video games that just want to hold your hand and help you win, Outer Wilds is content to beguile you with unsolvable mysteries.

Echoes of the Eye expands on the excellence of its 2019 predecessor with a return to the basic rules of play established in the original… but also not really. It’s a sequel that’s technically an add-on, and just getting yourself started on the new stuff is a puzzle unto itself.

As with Outer Wilds itself, the less you know going in, the better. Just fire up Outer Wilds again and see what you can find. An epic journey awaits.

Play it on: PlayStation, Xbox, Windows

Chivalry II isn’t my typical go-to, as an entirely online competitive multiplayer game. But the hack-and-slash PvP is an unhinged delight of ultraviolent swordplay and and incoherent screaming — which is so integral to the experience that it gets its very own button.

There’s really not much to Chivalry II. Once you finish the brief, straightforward controls tutorial, all that’s left to do is hop into matchmaking and test your knightly prowess in a live setting. For most people, “knightly prowess” is synonymous with sprinting up to an enemy and wildly swinging whatever bladed or blunt instrument you’re wielding until you or your opponent have been dismembered.

It’s the unintended comedy that makes Chivalry II a king, though. From an auto-revive feature that lets you punch yourself back to life to an entire button devote to bellowing out a “battle cry,” each match feels like an over-the-top parody of every single medieval fight scene that’s ever been committed to film.

Play it on: PlayStation, Xbox, Windows

Minecraft may be one of the most well-known games on the planet, but those who don’t play as regularly as I do may not realize what’s been going on in Mojang and Microsoft’s blocky world-builder. I’m talking about the 2021 launch of the “Caves & Cliffs” update, a two-part release that completely altered the shape and character of every Minecraft domain you explore.

The first part of the free add-on introduced some exciting stuff on its own: New resources, new plants and animals, new stuff to craft. But the second part, which dropped in early December, is quite literally a game-changer.

Part 2 of Caves & Cliffs completely rewrites the way Minecraft worlds generate. In addition to raising the world’s “ceiling” and lowering its “floor” — basically, how high you can build and how deep you can dig — the update also delivers significantly more naturalistic random world generation and environmental diversity. Mountains now look like fantastical versions of the craggy, towering peaks we see in the real world. Caverns evolve from the little passageways they used to be into sprawling, winding networks of maze-like corridors and yawning, stalactite-topped chambers.

Coupled with new rules that change the way threats like creepers and zombies spawn, Caves & Cliffs immediately makes Minecraft feel bigger and more expansive. It may never get a proper sequel, and that’s because of updates like this. Minecraft has been around for more than a decade now, but in Caves & Cliffs it feels like a game reborn.

To all my friends who keep yelling at me to play The Forgotten City: I hear you.

This fantastical mystery-adventure comes to us from rather unusual beginnings. Modern Storyteller, the Australian developer that made it, originally conceived The Forgotten City as a mod for The Elder Scrolls V: Skyrim. That mod has been around since 2015, but this standalone release from 2021 — which tweaks the plot to move us out of Elder Scrolls-land — put the inventive creation on many more radars.

This is a story game. The kind of thing where you walk around, gather information, and piece things together as you go. The central puzzle of the time loop is something you’re trying to understand, along with the history of this place. But the real allure of The Forgotten City, and the reward it offers (as it’s been explained to me), is an opportunity to live inside this deeply developed virtual world and uncover its many stories.

It was easy to miss this Apple Arcade launch if you don’t subscribe to the iPhone maker’s subscription games service. And that’s too bad, because Fantasian is something special.

Hatched from the mind of Hironobu Sakaguchi, an original creator of the Final Fantasy series, this April 2021 release plays a lot like that classic series of role-playing games with its turn-based combat and simple-yet-approachable gameplay. It’s the presentation that makes it a standout.

Fantasian‘s virtual environments look like elaborate and intricately detailed dioramas, and in fact they are. All of the game’s locations were first built in miniature in the real world; they were then 3D-scanned into the game. That’s why it looks like you’re walking around in a photograph. Couple that with music from Nobuo Uematsu, another notable name from Final Fantasy’s real world history, and you’re left with a first class Apple Arcade RPG that more than justifies the service’s $5 monthly subscription.

Play it on: iOS devices via Apple Arcade