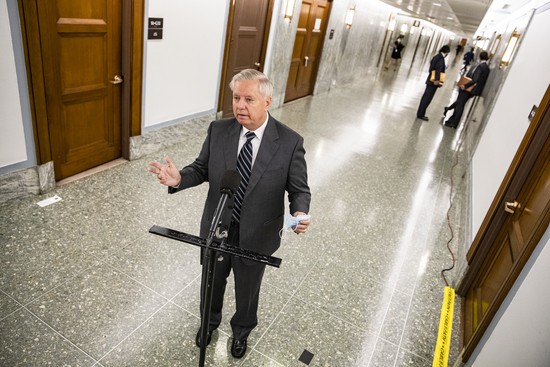 Business Insider, which obtained an early copy of the book, reported that Grisham wrote of Sen. Graham: “It struck me that he was using Trump to mop up the freebies like there was no tomorrow (seems that he still is). He would show up at Mar-a-Lago or Bedminster to play free rounds of golf, stuff his face with free food, and hang out with Trump and his celebrity pals.”

She goes on to relay a story of seeing Graham at Bedminster, lounging by the pool, remarking to her, “Isn’t this great? Man, this is the life.” Grisham remembered it because she felt Graham acted so “gross and tacky,” but there is more here. These are the actions of someone whose cynicism has reached such heights that he’s ready to just sell out everything and everyone in order to stew in his own crapulence.

The history of Sen. Lindsey Graham of South Carolina is a long journey of well-documented hypocrisy. His hypocrisy is so well-documented that it has been almost meta-documented during some of our country’s most historic moments. After roundly eviscerating then-Republican candidate for president Donald Trump in front of every microphone and camera he could find, Sen. Graham swallowed what might possibly have been left of his dignity and climbed on into the Trump grift train.

Since that train came to a halt, and the attempted coup d’etat did not materialize, Sen. Graham has deservedly been cast as a pariah by MAGA heads and even old buddies in the Senate. But as Grisham’s account describes (and Lindsey’s recent career shows), Sen. Graham has been out searching for free and expensive lunches for years now and is likely so far gone he just walks where Mitch McConnell points him to walk, and then sits down and stuffs his face.