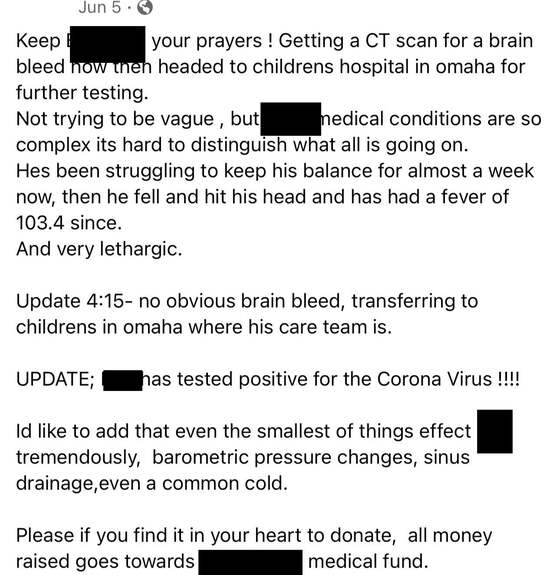 This one is a little complicated. This is a family of nine—mom, who is the Facebook poster; dad; and seven kids. One of the kids is in preschool. We know at least one other is in diapers. So this is a family with school-aged kids. Lots of them. They are also anti-vaccination, and no one is vaccinated.

This child is special needs, and as we’ll soon see, he is autistic.

The child isn’t just autistic, but has other undetermined medical issues, including a predisposition to hypoxia (presumably she misspelled it), which is a respiratory issue.

We don’t know if the child is old enough to be vaccinated, but that kind of preexisting condition makes it even more critical that everyone around that child took every precaution possible, including vaccination.

But that “healthcare is a joke” thing is something. What was the hospital supposed to do? The health care system DOES have a solution to this problem: a vaccine, and she has refused to take it, as has her entire family (those who are eligible for it).

Your child is fighting COVID, so what better use of your time than to shitpost about the vaccine on Facebook?

I will never judge a parent dealing with a difficult special needs child. But taking a child out of a hospital against medical advice will generally trigger a Child Protective Services investigation. And why is the child so bruised? Is her home not set up to protect him? No helmet or pads to protect him?

I’d like to assume she’s doing all she can under very difficult conditions, but the hospital absolutely should be on the lookout for child abuse. And she should be ready to have that conversation if, indeed, she’s doing all she can to protect him. Instead, when confronted, she takes the kid out against the hospital’s wishes and rushes back home. Is it any wonder people are suspicious?

I get that mom is frustrated. How could you not be with seven kids, including a severely disabled one? I’m often frustrated with two generally good kids. But I also feel for the hospital staff and even the cops who had to deal with this outburst.

Furthermore, it’s clear that going to the hospital is incredibly difficult with this child. So why not vaccinate, to protect against having to go back? No no. Instead …

Did she really send the kid to school knowing he was sick? I don’t trust her enough to believe the school is actually saying, “He doesn’t look sick enough so he has to stay.” That’s just … weird.

I’m more concerned that this child went in the first place.

Definition: “a person with the paranormal ability to apprehend the mental or emotional state of another individual.”

“I WILL SHRED THAT SCHOOL BOARD APART.”

“MY VACCINE PASSPORT IS MY MIDDLE FINGER.”

She has a pure heart. And is an empath.

The woman who had a dizzy kid with high fevers for a week, and didn’t realize he had COVID, is now going to judge parents for not realizing their kid had lice?

BTW, if you don’t know, lice like clean hair. And my kids caught lice several times during their elementary school time. It’s no big deal. The critters spread like … well, they spread like COVID. It sucks, but it’s a mere inconvenience at worst.

She … she thinks she’s grounded.

“I HOLD ALL YOUR DIRTY LITTLE SECRETS.”

“I WILL DESTROY YOUR ENTIRE LIFE.”

Such a pure heart!

“We are a family of 9, but the kids don’t eat a whole lot”? As we’ll see just below, the whole family has COVID right now, and dad is in the ICU fighting for his life. So both caretakers are down, and all the kids are down. And earning money and preparing food is clearly too much.

It is certainly asking a lot of people to feed your family of nine, so maybe that’s just an attempt to make it seem less daunting? But when I read it, it seemed chilling. “I know we don’t have many people to count on” tells me she’s alienated friends and extended family. No one can handle her pure heart.

But again, had mom and dad and the older kids been vaccinated, this likely wouldn’t be a problem. That’s the problem with selfish refusal to do the right thing: It’s not just yourself you’re impacting, but your loved ones, your family, and even your broader community, who now need to mobilize to feed NINE people because they were too selfish to jab.

$2,500 to transport one of the kids to another better-equipped hospital.

$2,500 is a lot more money than the cost of vaccinations, which was, let’s see, carry the one … ZERO DOLLARS.

Instead, you have dad and a child facing death, another child in diapers with COVID, and a whole family wrecked, begging their “new” community (whatever that means, like the ivermectin Facebook group or something?) for food.

This is the last update, for now.

Again, the definition of empath is “a person with the paranormal ability to apprehend the mental or emotional state of another individual.” So why is every one of these her railing against someone she clearly can’t begin to understand?

Can you imagine the poor hospital staff trying to explain to a COVID-POSITIVE woman that no, she can’t come in to see her medically fragile, critical-status kid?

And then this woman, I’M AN EMPATH AND I UNDERSTAND EVERYTHING can’t fathom why it might be a bad idea to let her into a medically sensitive area.

And then, imagine having your whole family utterly trashed by this virus, and still refuse to rethink your attitudes about the vaccine?