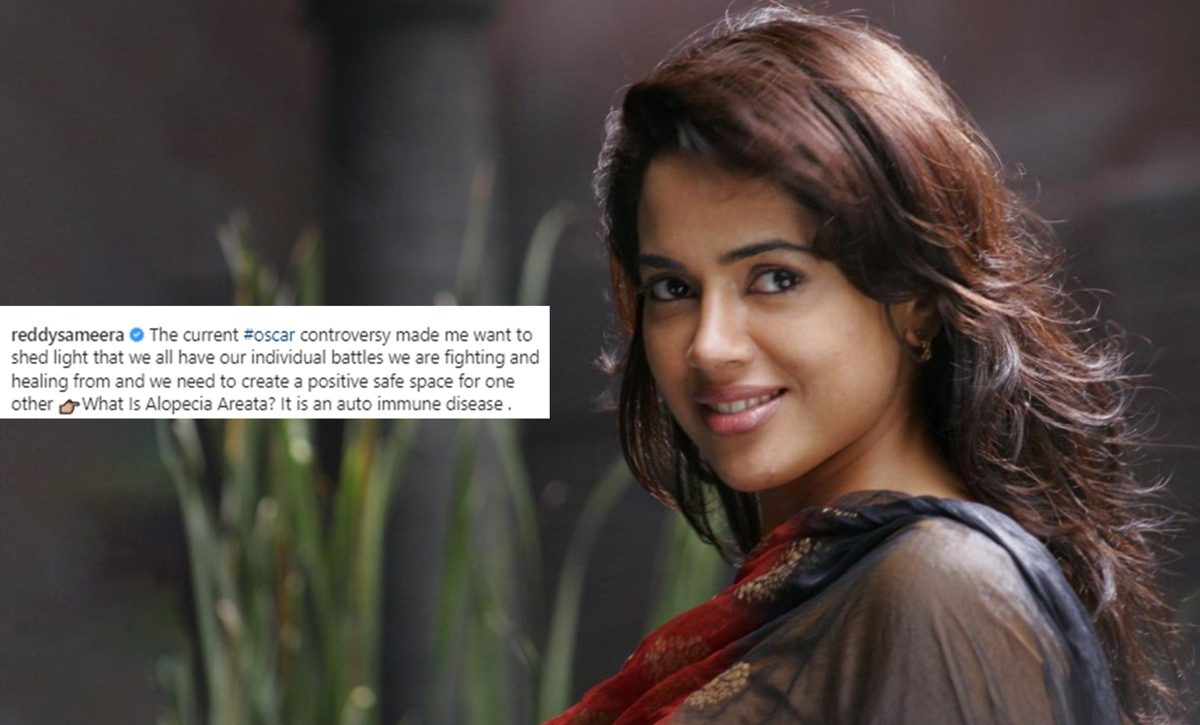 The Oscars 2022 slap gate controversy that took place between Will Smith and Chris Rock garnered worldwide media attention and several prominent celebrities weighed in on the incident. The altercation occurred after Rock made a joke about Jada Pinkett Smith’s shaved head. Pinkett has been quite vocal about her struggle with alopecia, a disease that causes excessive hair fall and that was the reason why she shaved her head. Bollywood actor Sameera Reddy has now opened up about her own journey with Alopecia and educated netizens about what the disease is all about.

SEE ALSO: What Is Alopecia Areata? Know About The Ailment Jada Pinkett Smith Is Suffering From

Sameera Reddy took to her Instagram and shared a lengthy post describing her own journey and struggles with alopecia. The actor shared that she had been diagnosed with the disease back in 2016 after giving birth to her son when she noticed bald patches on her head. She wrote, “The current #oscar controversy made me want to shed light that we all have our individual battles we are fighting and healing from and we need to create a positive safe space for one other. What Is Alopecia Areata? It is an auto immune disease .”

She further explained in detail what happens when a person is diagnosed with alopecia, “When you have Alopecia Areata, cells in your immune system surround and attack your hair follicles. This causes the attached hair to fall out which causes patches of bald spots. I got diagnosed with it in 2016 when Akshai saw I had a 2-inch bald spot at the back of my head. In one month I discovered two more patches. It was really hard to deal with. Alopecia Areata does not make people sick, nor is it contagious. It can, however, be difficult to adapt to emotionally.” Take a look at her full post here-

SEE ALSO: Jada Pinkett Smith Opens Up After Will Smith Slaps Chris Rock At Oscars 2022 In Post About Healing

Meanwhile, Jada Pinkett Smith had previously taken to her Instagram and wrote, “Mama’s gonna have to take it down to the scalp so nobody thinks she got brain surgery or something. Me and this alopecia are going to be friends … period!” and shared a video of her shaved head. She has spoken about her condition several times before in interviews and talk shows.