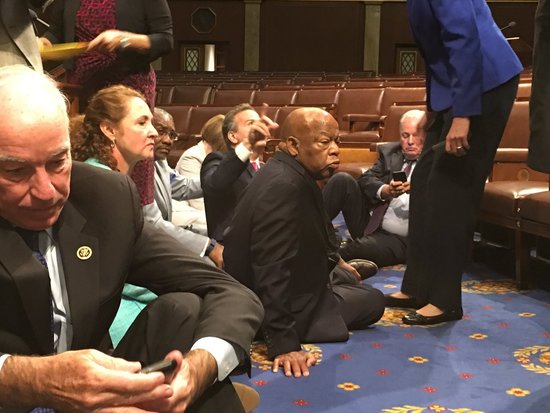 On Thursday, during a Congressional committee hearing with Attorney General Merrick Garland, Rep. Gohmert took a break from smelling his own farts to imply that Attorney General Garland was an accomplice in a “two-tiered system of justice.” Before you could even come up with a plausible bogus example for Gohmert to vomit into the public sphere, Louie came forward belching this heinous idea:

“On June 22 of 2016, judge, most of the Democrat members of Congress took over the House floor, and, for the first time in American history, members of Congress obstructed official proceedings. Not for four to six hours, but for virtually 26 hours. Not just violating over a dozen House rules, but actually committing the felony that some of the Jan. 6 people are charged with.”

“That was during the Obama administration, nobody’s been charged, and those kinda things—where you let Democrat members of Congress off for the very thing that you’re viciously going after people that were protesting on Jan. 6—gives people the indication that there is a two-tiered justice system here in America.”

The reality that then-Speaker of the House Paul Ryan—a Republican dirtbag—is the one who didn’t censure Rep. Lewis or any Democratic representatives for the sit-in, wouldn’t ever factor into a GOP lie like this. But more grotesquely, the idea that the two events could be possibly similar in anything other than their location, is offensive.

As the current, democratically elected government, has not let go of the fact that our democracy was very close to being overthrown with the help of people like Louie Gohmert, Rep. Gohmert seems to continue his full-throated support of saying just about anything that might mitigate the hammer of cosmic justice he so clearly deserves from falling squarely on his soggy sponge-filled head. In the past couple of months, Gohmert has continued his white supremacist-based delusion tour, questioning whether or not the FBI planned the Jan. 6 insurrection in some kind of deep state conspiracy to keep Donald Trump from once again being the most unpopular president of the modern era.

Let’s do a quick comparison: