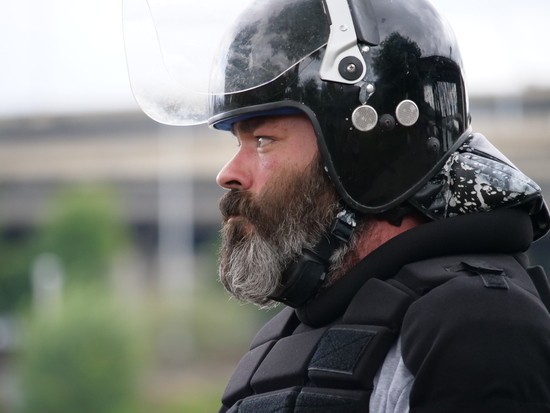 Swinney—a bearded, 6-foot-5 man with a record of violent behavior—had a habit of appearing at Portland area far-right protests, including the August 2019 Portland Proud Boys rally, and for threatening violence against “antifa” on social media beforehand. Swinney even helped organize some Proud Boys protests in the suburban Portland area.

His actions at the Aug. 22-23 Proud Boys provocations in downtown Portland—wherein right-wing thugs engaged counterprotesters in street brawls and cruised the city’s streets in pickup trucks with black-shirted Proud Boys in the back end, shooting at pedestrians with paintball guns—finally landed him in legal jeopardy.

Jurors saw photos wearing his familiar black helmet with a face shield. On that day, he was holding a paintball gun that he aimed recklessly, as well as a long wooden flag police and a kickboxing-type padded arm shield; he wore a knife on his waist, and a .357 Magnum revolver on his hip.

“He came here with a six-shooter so that he could terrorize our social justice movement here in Portland, plain and simple,” said deputy district attorney Nathan Vasquez, the co-prosecutor in the case. “He is not a sheriff. He is not a lawman. He has no authority over the streets here in Portland. … He wanted to be that vigilante cowboy and tell people what they could or could not do.”

“Did she deserve to get shot with a paintball? Yeah,” Swinney said in the call. “Am I glad? Yeah.”

In testimony, he also said that he pulled out his .357 handgun because he ran out of paintballs and mace.

Swinney took the stand on the last day of testimony and told the jury that he came to Portland because of news reports about property damage and protesters “destroying the city” during the racial-justice protests that summer. He testified that the Aug. 22 event was intended as a show of support for the police, who he said might feel “everyone is coming down on them.”

“I know these rallies are going to come out and be attacked,” Swinney said, explaining why he wore combat gear to a rally almost 1,500 miles from Texas. “I’m also not going to be terrorized in my own country.”

Swinney, like most of the Proud Boys, was an avid consumer of Fox News and other right-wing media coverage of “Antifa” and Black Lives Matter activists, particularly the long-running narrative that conflated the former with the latter (when in fact there is little evidence of “Antifa” organizational or other involvement in the summer 2020 anti-police protests) and presented both movements as existential threats to America.

Events like those in which Swinney flew to Portland to participate in, and which he helped organize, served a twofold purpose: First, to threaten and intimidate pro-Black Lives Matter and anti-police-brutality protesters; and second, to create violent and menacing images intended to persuade the people who live in these suburbs and elsewhere—people who are far removed from most of the events—that protests of any kind against police brutality promote “Antifa,” “anarchism,” and Marxism, representing the “violent left.”

But all anyone had to do was attend one of these events with open eyes to figure out who was actually bringing the violence to Portland.