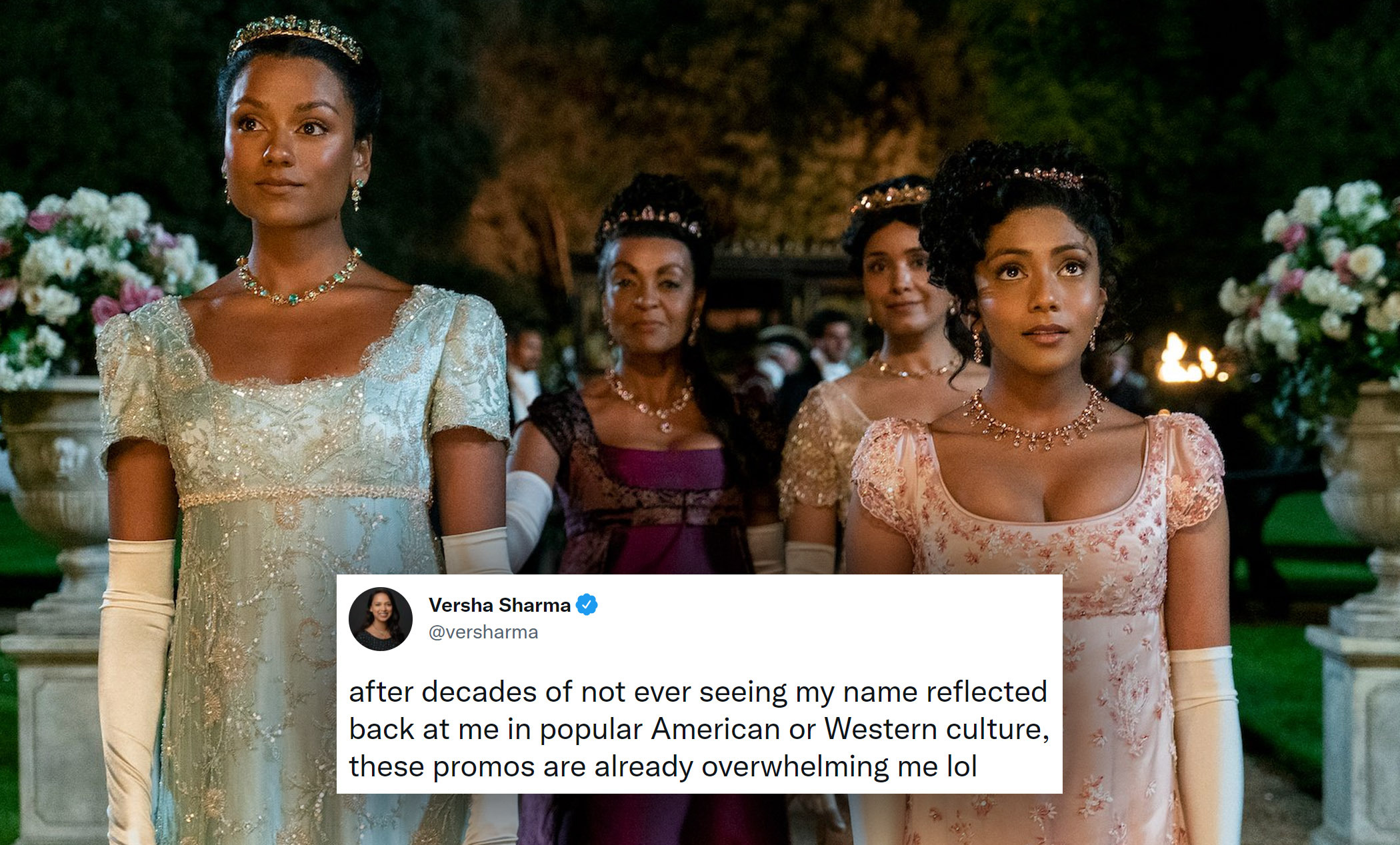 The Sharmas have arrived and they are the talk of the ton for all the right reasons! Remember when we told you that Simone Ashley–who you might remember from Netflix’s other hit series Sex Education–will be seen opposite Jonathan Bailey’s Anthony Bridgerton as his romantic interest Kate Sharma in the second season of the regency era period drama Bridgerton? Yeah, we finally have a look at the instalment which is based on Julia Quinn’s romance novels and boy, was it worth the wait! Although Regé-Jean Page won’t be back as the fan-favorite Duke of Hastings, the cast is joined by newcomers like Ashley along with Charithra Chandran and Shelley Conn who will be seen playing the part of Kate’s sister Edwina Sharma and their mother Lady Mary Sharma.

Calling all Bridgerton fans, The Sharma Family has officially arrived thanks to these brand new photos from Season 2 pic.twitter.com/HTswqcFE5X

It was reported that Kate is “smart, headstrong young woman who suffers no fools — Anthony Bridgerton very much included.” Shondaland is even taking care to bring the character and her Indian descent to life, unlike the Kate Sheffield of Quinn’s novel, and it has got desi fans thrilled. In fact, Netflix just dropped photos from season 2 hinting at newer things and it is the representation that has got Indian Twitter excited. While in one of those Lady Danbury (Adjoa Andoh) appears to be presenting the Sharmas to proper London society who are dressed in their finest, the other one has Kate and Anthony stealing a rendezvous.

Needless to say, desi and brown excellence is being discussed with the photos which have now gone viral. See for yourself.

The gossipy auntie getting ready to go to a Diwali party: https://t.co/aHnUxkx3Lm

omg we got a desi family and Simone from Sex Education https://t.co/cvFxloL96v

this. looks. so GOOD https://t.co/rkjQBuNRxF

i hope they wear saris too in some scenes https://t.co/oNNj1Ttgzt

we can safely say this show did serve representation, i can hardly wait for season 2 https://t.co/t9JTowV0Y8

As an Anglo-Indian and a die hard Jane Austen fan, I’ve obviously imagined myself in such costumes many many times, but now SEEING these sisters dressed in their period costumes is just so cool! https://t.co/fpvywwCgYu

Nobody talk to me these two are going to end me 😍 https://t.co/jXkhiR49iv pic.twitter.com/qQuAwUdRE0

i’m so happy to see more south asian women on my tv screen!!! i love this sm https://t.co/WTUAm5hKa0

Netflix tryna get my Indian mom to watch Bridgerton.

after decades of not ever seeing my name reflected back at me in popular American or Western culture, these promos are already overwhelming me lol https://t.co/OMDWBEAHE4

SEE ALSO: ‘Bridgerton’ Fans, THIS Is Why Regé-Jean Page Won’t Be Back For Season 2 Of The Regency-Era Period Drama

Meanwhile, some are still heartbroken about Page’s exit but hey, it is what it is. Earlier, the actor had told Variety, “It’s a one-season arc. It’s going to have a beginning, middle, end – give us a year.” “(I thought) ‘That’s interesting,’ because then it felt like a limited series. I get to come in, I get to contribute my bit and then the Bridgerton family rolls on. One of the things that is different about this [romance] genre is that the audience knows the arc completes. They come in knowing that, so you can tie people in emotional knots because they have that reassurance that we’re going to come out and we’re going to have the marriage and the baby.”

Also, if you’re not in the know, Bridgerton has already been renewed for a third and fourth season with Jess Brownell serving as the showrunner. That and a spin-off limited series that expands the franchise. While we wait for Season 2, it is hearty to know that the first is a spinoff series that will follow a young Queen Charlotte and will reportedly be written by Shonda Rhimes who is also set to executive produce.