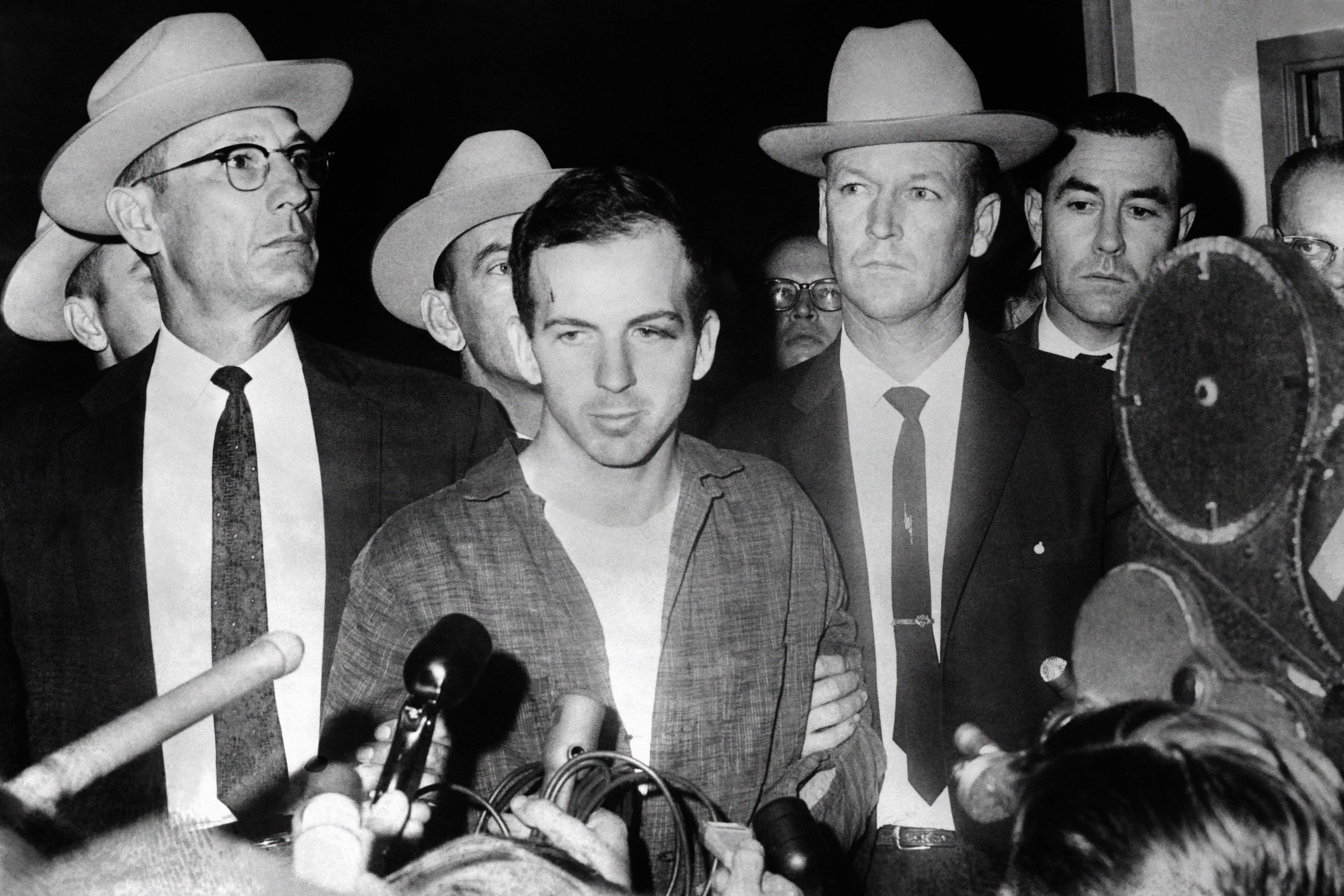 The latest release reflects a small percentage of the nearly 15,000 documents the Archives say are still under wraps, in full or in part. Those records, courtesy of an order from Biden, will not be released until December 2022.

Many of the documents made public this December are items from agencies such as the State Department, the FBI, and the CIA and researchers have largely deemed the tranche to be of low significance. Pointed out in a report by Politico, the latest batch does offer some “fresh insights” into Lee Harvey Oswald, the man who the 1964 Warren Commission found had killed President Kennedy in a lone wolf attack.

The House Select Committee on Assassinations, however, found differently a little over a decade later, suggesting that while Oswald was the responsible killer, Kennedy’s death was likely the fruits of a greater conspiracy.

In a phone interview on Dec. 17, Hughes reflected on the release.

“It’s only slightly annoying that they put out so few documents,” Hughes said, pointing to Gerald Posner’s book Case Closed as what he deems the authoritative text on the assassination. “I consider the JFK assassination a case that has been solved.”

But, Hughes noted, even Posner has appeared on television since the release to air frustration over the lack of greater transparency.

“It’s pretty obvious why they’re holding them back. There are embarrassing details that the CIA and other parts of the federal intelligence community just don’t want people to know about. I don’t see any evidence that any part of the government is trying to cover up the assassination in any way, though I think it is illuminating to see what parts the government did have important information about but never realized its importance until after the assassination,” Hughes said. “It’s not sinister but very human. People tend to see what they expect to see and people did not expect Lee Harvey Oswald to have any sort of impact on history. He was very much a loser.”

The batch published on Dec. 15 includes memos related to Oswald’s trips to embassies in Mexico. He visited both the Cuba and USSR embassies in Mexico City months before the assassination and was in search of a visa. One of the records released this month was merely another version of a memo that was previously published confirming Oswald engaged with Valery Kostikov, a Soviet consul.

Kostikov, importantly, was connected to the KGB’s assassination division.

A report by The Independent highlighted some of these more interesting findings and arguable blunders made by the CIA, including one Oct. 1, 1963 CIA transcript. In it, Oswald was recorded speaking in Russian—albeit poorly—to an operator at the USSR embassy.

“Hello, this is Lee Oswald speaking. I was at your place last Saturday and spoke to a consul and they said that they’d send a telegram to Washington, so I wanted to find out if you had anything new? But I don’t remember the name of that consul,” Oswald said.

He was referring to Kostikov.

The intercepted call records reflected Kostikov later responding: “Just a minute, I’ll find out. They say that they haven’t received anything yet.”

Oswald asked: “Have they done anything yet?”

Kostikov said a “request” was “sent out” but nothing had been received yet.

Then he hung up.

CIA chief Tennent Bagley apparently only made note of the call in a memo on Nov. 23, 1963, a day after Kennedy was shot.

The tranche also exposed records exhibiting how the authorities treated what they thought were “prank calls.” One was made in October 1962, a full year before the assassination, the records showed.  A man contacted the U.S. Naval Attache in Australia and said he was a Polish chauffeur for the Soviet embassy in Canberra. He claimed that “Iron Curtain countries had put out a $100,000 bounty—about $920,000 in today’s money—to kill President Kennedy.”

The CIA didn’t follow up because Australian authorities didn’t think the caller was on the level; the Soviet embassy only hired Soviet drivers, not Polish ones, the Aussie officials presumed.

Then, 48 hours after JFK was killed, another tipster, perhaps even the same one from October 1962, called the agency to emphasize that it was the Soviets who were behind the assassination.

“This individual, while discussing several matters of intelligence interest, touched on the possibility that the Soviet Government had financed the assassination of President Kennedy,” a May 22, 1964 memo said.

According to The Independent, the caller “claimed he had been there in early November when the Soviets dispatched an Australian man to the USA carrying a briefcase, before engaging in sustained conversation over the radio.”

The man said that after Kennedy was assassinated, the Soviets in the embassy made a toast.

“We achieved what we want,” they reportedly said.

A senior official at the CIA, Richard Helms, said in a 1964 report that the call was “some type of crank.” But, he added, “This conclusion, however, cannot be confirmed.”

The records do confirm more details, however, of the CIA’s plot to assassinate Cuba’s leader Fidel Castro and the agency’s reliance on the “criminal underworld with contacts inside Cuba.”

While that sort of thing is more obviously an unsavory thing for the U.S. to admit in detail, there are other elements to this latest release that pose similar threats to keeping up appearances.

“A good journalist named Donald Bohning, who wrote about JFK’s secret war against Castro—well, the version that came out this week says [Bohning] was given provision security approval and then covert security approval for use as a confidential informant,” Hughes said.

Hughes, a former journalist himself, described that dynamic—a journalist who also works for the CIA—as “very uncomfortable” to consider.

“We worry that if the world knows the CIA is using journalists as sources, that makes journalists lives harder, especially when they are foreign correspondents and other nations don’t want American journalists to have unfettered access,” he said. “It’s understandable why the CIA would keep that under wraps.”

But perhaps what makes less sense, and points to a larger point about the need for greater transparency, is what happened with Bohning’s information.

When the Archives issued the records in 2017, they left out information about him being a confidential informant, Hughes said.

“They didn’t realize Bohning died in 2015, so there was no privacy aspect to this by the first time they released the documents in 2017. They were not protecting him in any way,” Hughes said.

“The government withholds information that can’t do any harm any more. In their zeal to protect sources, they protect dead sources. People like Bohning don’t need protection anymore,” he said.

And to that point on the certain sloppiness of declassification, Hughes highlighted Operation Mongoose, a plan by the U.S. government to overthrow the Castro regime.

The first version of an operations schedule for Mongoose appeared in a State Department public release in 1997. Then, the government released the same document in 2018, but this time, they bizarrely withheld information already released 21 years prior.

“And now, the same document was released this week,” Hughes said. “This one restores the information that was taken out in 2018. It also reveals on the last page that counterfeiting Cuban money was contemplated.”

During an appearance on CNN, Larry Sabato, an expert on the JFK assassination, expressed frustration with the release, calling the records “minimal” and worthless.”

But, he added: “The reason it’s so important is not so much that we’re going to find a smoking gun that changes the entire theory of who killed Kennedy … The lack of transparency and the fact that getting these documents after 58 years is like pulling a whole mouthful of teeth—it tells you why we have so many conspiracy theories.”

Hughes felt similarly and said it might be better if the ultimate declassification was put into the hands of a citizen’s board and then modeled in the way of the original Assassination Records Review Board.

“By taking it out of the hands of the agencies that keep secrets, it will give other agencies a much greater incentive to take declassification seriously and protect the real secrets that need keeping,” he said. “It would help get out the information that doesn’t harm American national security but can improve American self governance.”

A citizen’s declassification board, Hughes said, would likely need a full-time roster of commissioners and would need to be populated by foreign policy and national security experts and the like.

“And one thing we often overlook, it’s often easy to tell what will harm national security and what will not. A lot of declassification is done by people who are not exactly experts. You don’t need a whole lot of expertise to tell what needs to be kept secret or not,” he said.

A citizen’s declassification board could “put the burden on people who want information out rather than the burden being on agencies who can justify keeping things secret,” he added. “Putting the burden on citizens to find out what their government is doing is the wrong view for a republic.”