For the first time since its inception in 2008, the Indian Premier League’s (IPL) league phase will see the teams divided into two virtual groups. The IPL Governing Council on Friday announced that IPL 2022 will begin from March 26 with the final slated on May 29. The 70 matches in the league phase will be hosted across four venues in Mumbai and Pune. Over the years, IPL’s league stage has always been played in a home-away format, where each team plays the same opposition twice but in the 15th edition, there will be a change. The number of teams in IPL 2022 has been increased to 10 with the addition of two new franchises – Gujarat Titans and Lucknow Super Giants – but the number of matches per team remains 14.

The 10 teams will play a total of 14 league matches (7 home matches and 7 away matches) totalling to 70 league matches, followed by the 4 playoff matches. Each team will play 5 teams twice and the remaining 4 teams only once (2 only home and 2 only away).

To decide on the above, teams have been assigned in two virtual groups based on the number of IPL Championships won followed by the number of Final matches played by the respective teams.
Group A comprises Mumbai Indians, KKR, Rajasthan Royals, Delhi Capitals and Lucknow Super Giants.

In group A MI (Team 1) with five titles, has been placed as first team. Correspondingly, in group B, the first team is CSK (Team 2) which has four titles. 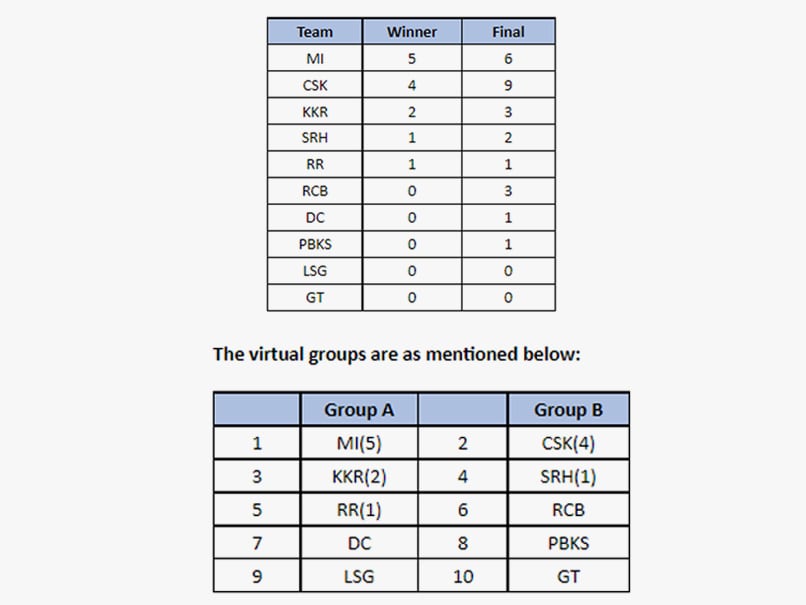 Team 5 again in group A is Rajasthan Royals (1 title) and its corresponding Team 6 in group B is RCB, which has played three finals.

Newcomers, Lucknow Super Giants is Team 9 in group A and Gujarat Titans is corresponding team 10 in group B.

IPL 2022 Playing Pattern – Which Team Will Face Whom?