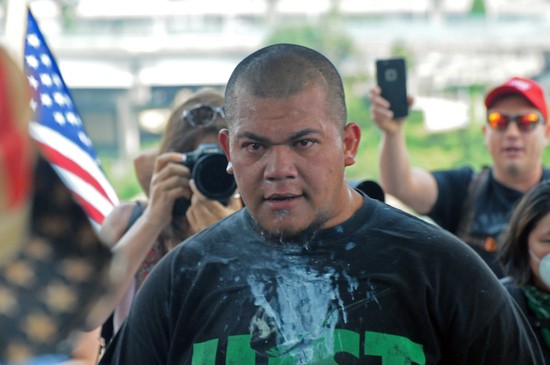 At a hearing Wednesday in Boise’s Ada County Magistrate Court, prosecutors explained the case against Chapman. They claim that Chapman was hospitalized at St. Alphonsus Regional Hospital in early November 2021 with pneumonia and was intubated. He became abusive toward the nurse in charge of his care.

He reportedly complained constantly about the care and medications he was being administered, and used both racist and sexist slurs in his verbal abuse. It all came to a head on Nov. 11, when he grabbed the nurse, who called police. After being charged with assault on Dec. 7, he reportedly also went back to the hospital in an attempt to contact the nurse.

Judge Joanne Kibodeaux listened while Chapman explained that he and his wife were attempting in vitro fertilization and that his detention had created a hardship for them, but in the end kept his bond at $100,000 and signed a no-contact order requiring Chapman to stay away both from his victim and from the hospital where she works.

The charges against Toese, which were listed on a victim-notification website, are less clear. The site lists three second-degree assault charges (along with a weapons charge and two counts of rioting and criminal mischief) in Oregon, as well as third-degree assault, obstructing a police officer, and criminal trespass charges from Thurston County, Washington.

The information released so far indicates that Toese was arrested Jan. 5 and Jan. 6, but the circumstances of the incidents have not yet been made publicly available. Daily Kos has requested the records but has not obtained them at press time.

It’s possible, if not likely, that Toese’s charges in Thurston County are related to the street brawl he led in Olympia in October 2021, at the culmination of which he was shot in the foot. A video of the shooting also apparently showed Toese assaulting a leftist counterprotester with a baseball bat.

Toese has cut a notorious figure while participating in Patriot Prayer and Proud Boys events over the past four years, particularly on the West Coast, where he has played a leading role in the violence the organization brings to events wherever they are. Along the way, he also has racked up a string of at least 18 criminal charges, including both felony and misdemeanor assault, along with harassment and disorderly conduct, but has mostly been sentenced to short probationary terms.

Similarly, Chapman has a criminal record as long as your leg. He first made a name for himself at a “March 4 Trump” in Berkeley on March 4, 2017, by coming to the event prepared for battle with homemade implements: a shield adorned with an American flag, football-style padding and a helmet, and a long wooden sign post he wielded like a baseball bat. A video of Chapman breaking the post over the head of an antifascist protester that day went viral and gave birth to his nickname. Chapman was charged with multiple counts of felony assault, which he eventually plea-bargained down to a single charge and five years’ probation.

His next big moment, however, was also the Proud Boys’ inaugural event: the April 15, 2017, “free speech” rally they dubbed “the Next Battle of Berkeley” and which proved to be a seminal moment for white nationalist groups such as Identity Evropa and the Rise Above Movement, the leaders of which were all present.

Founder Gavin McInnes was so impressed that he promptly anointed Chapman a leader of the Proud Boys and placed him in charge of organizing what he considered the group’s “tactical defensive arm,” dubbed the Fraternal Order of Alt-Knights (FOAK). Chapman described FOAK as a “fraternal organization,” a Proud Boys affiliate chapter, “with its own bylaws, constitution, rituals and vetting processes.”

However, over the ensuing months and years, nothing ever came of the FOAK project, mainly because Chapman wound up facing multiple charges arising from a variety of violent incidents: for hitting a Texas man over the head with a barstool, for fighting a person in Berkeley while filming a promotional video, and for operating a vehicle off-road.

In July 2019, Chapman entered a plea agreement in the Texas case, admitting guilt to aggravated assault with a deadly weapon, which in Texas is a second-degree felony. The judge in return gave him three years of “deferred adjudication,” meaning that if he commits any further offenses, he can be returned to Texas with a sentence of up to 20 years behind bars.

He recently attempted to set up an explicitly white-nationalist version of the Proud Boys he called “Proud Goys,” a reference to their belief that Jews secretly control American society. Chapman claimed after the November 2020 election that “the coup is complete,” and ranted at length about his plans for his group:

We will no longer cuck to the left by anointing token negros as our leaders. We will no longer allow homosexuals or other “undesirables” into our ranks. We recognize that the West was built by the White Race alone and we owe nothing to any other race. Proud Goy members will pay homage to the White men who gave their lives to build our civilization: White men who provided their intellect inventing the modern world, spreading enlightenment, and providing the framework for lesser civilizations to thrive. … We will boldly address the issues of White Genocide, the failures of multiculturalism, and the right for White men and women to have their own countries where White interests are written into law and part of the body politic. We will no longer stand by as Whites are murdered in the streets because of the color of their skin. …

At his arraignment on Wednesday, Chapman told Judge Kibodeuax that his violent past was behind him, and that “I’m not that person anymore.” She responded that she saw no reason not to maintain his bond, as well as to sign the no-contact order against the nurse he assaulted.

Idaho passed its law protecting health care workers from assault in 2014. Anyone convicted of violating it faces a felony sentence of up to three years in prison. The problem has grown to intensive levels in Idaho since then.