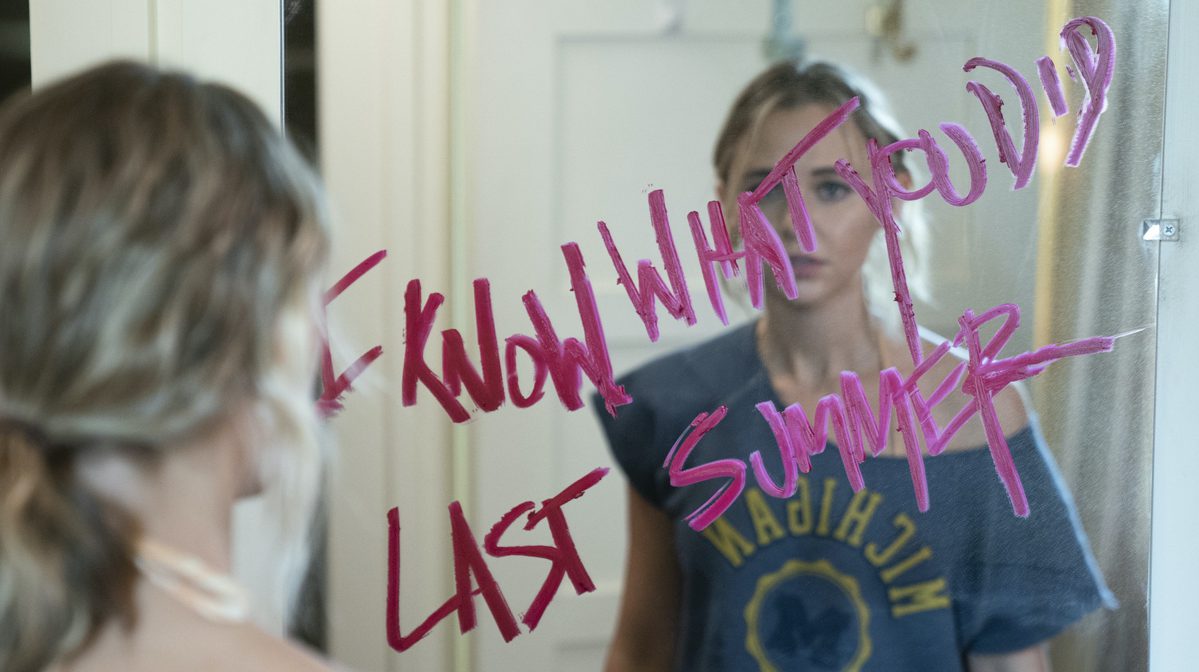 There are several moments in the first episode of Amazon’s ill-advised I Know What You Did Last Summer reboot that made me pause, rewind, and yell out loud.

They are not jump scares or acts of violence or anything else you’d expect from a series based on Jim Gillespie’s iconic 1997 slasher. They were moments of fumbling dialogue, clumsy pacing, and editing so erratic that it borders on disturbing. It was the moments when key plot point were folded into expository dialogue with all the nuance of putting an entire rotisserie chicken between two pieces of bread and calling it a sandwich. It is, quite plainly, disappointment run amok.

I Know What You Did Last Summer shares the same basic premise as its ’90s predecessor: A group of friends hit someone with their car then dispose of the barely breathing body — a year later, they’re haunted by threatening messages and a string of grisly murders in which any of them might be next.

The one thing that can be said for Amazon’s reboot is that it offers a heap of soapy twists — some predictable, some genuinely enticing — that will keep you going if you choose to see it through. For starters, they know the victim Ali (Madison Iseman), and her twin sister Lennon (also Iseman) was the one driving the car. When the stalking begins, the friends know exactly who’s behind it… or at least they think they do. Fans of gore will be more than fed as the murders unfold, starting with one that made this reporter gag and ranks firmly in the top five grossest things I’ve seen on TV.

But apart from the twists, IKWYDLS lacks any purpose. The show exists only to ask the same timeless and insipid as so many reboots: “What if this, but with phones?” The tech angle remains mostly unexplored apart from the killer sending texts with emoji. There’s an OnlyFans equivalent, an influencer friend, and some choice Gen Z catchphrases, but that’s about it. Questions like “Who are these characters? What do they want? How can we revive a classic slasher movie in a worthwhile way?” — these are questions for you to answer, dear reader, and good luck on your noble quest.

Much of the show’s weakness stems from a messy pilot episode, which introduces us to the core characters at a graduation house party indistinguishable from a nightclub. The twins have a huge fight mainly about Dylan (Ezekiel Goodman), their childhood best friend who has all the charisma and personality of a bag of flour, but he’s straight and white and therefore an object of interest for both of them and more. The fight conveniently moves on to everything the twins have ever disagreed on but maybe been too polite to discuss until tonight. It’s told in broken pieces, never packing the necessary punch to have any real resonance; a backstory dump to force emotional response rather than actually building up their relationship.

The fight scene highlights many deeper problems in the series. A good television episode has multiple, individual plot lines moving forward in tandem. IKWYDLS‘s disparate party scenes are all meant to underscore the sisters’ enmity. Instead of independent scenes, we cut between locations with no rhyme or reason — sometimes just for one line of dialogue. There is an insert of someone vomiting and then doing a line of cocaine, never to be seen again. TV shows love to show us a pivotal event and return to it with different backstories, subplots, and points of view — but this one fails in execution from the start.

During the history lesson fight scene, we learn that the twins’ mother died by suicide 10 years ago, and so begins the show’s excruciating mental health dialogue. More than once someone will wonder “why” she died or whose fault it was, the kind of damaging rhetoric that this conversation moved away from long ago. Ali is the lonely twin, mocked by her sister for “moping around all day,” while Lennon chooses to do drugs, party, have sex, and form no emotional attachments.

You may read that and think “Ah, the girls are depressed and looking to unhealthy coping mechanisms for their grief,” and you would be correct, unlike every character on the show. Others reference childhood Dylan having OCD, but four episodes in it’s unclear if this is an actual diagnosis or misguided exaggeration. A secondary character ostensibly on the spectrum doesn’t stick around long enough to get any empathy. The show offers no helpful commentary but reinforces these surface-level depictions that vilify more than flesh out any characters.

Elsewhere, the show has perhaps a modicum of respect for sexual fluidity, but not much else. Riley (Ashley Moore) and Johnny (Sebastian Amoruso) are cast aside so rapidly that it takes a second to realize they were barely given a spotlight to begin with. We continue to be fed via dialogue that Ali has loved Dylan since kindergarten, but why? Incredible question. What connection do Lennon and Margot share (Brianne Tju)? None of this is even hinted at after four episodes, and the longer a show withholds key motivators like these, the more likely it is to lose the audience. Since the show is set in Hawaii, people of color abound, but make no mistake that this is the story of a white family. Anyone else is positioned to prop them up, to die at the hands of a killer trying to teach Lennon what can’t be taught.

If you’re looking for a Halloween binge with minimal style, no substance, and buckets of blood, I Know What You Did Last Summer checks all the boxes. But don’t be surprised if you leave feeling as hollow and empty as the show itself.

I Know What You Did Last Summer is now streaming on Amazon Prime.