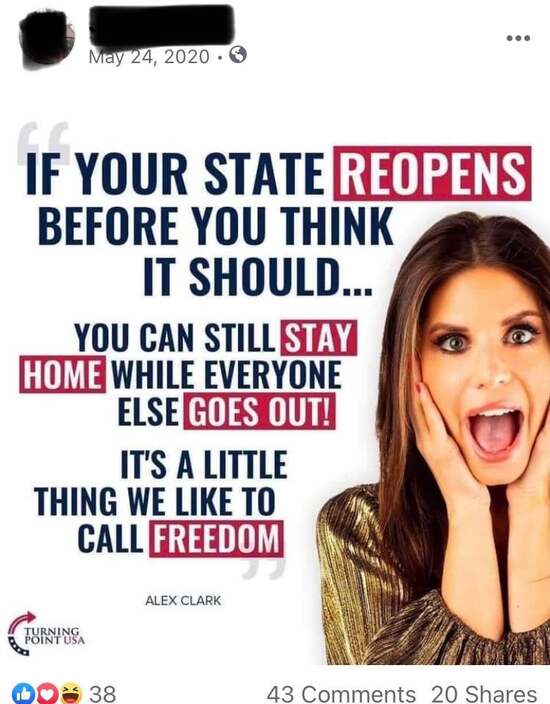 “If you don’t like mask and vaccine mandates, you can always stay home and pout. It’s a little thing we like to call freedom.”

“If you want to go out unprotected during a pandemic, you can sign a waiver that says you won’t clog up hospital beds with your presence, and you definitely won’t burden society with the costs. It’s a little thing we like to call freedom.”

“If you refuse to take safety precautions against a raging global pandemic, you can be legally responsibly for passing the disease to other individuals. It’s a little thing we like to call freedom.”

I can play this game all day long.

“Freedom” doesn’t only mean “freedom to infect others.”

So I looked up this story … it was some Portuguese legal case saying that the forced quarantine of four German tourists was based on the results of a PCR test. The court ruled that a doctor had to have made the medical diagnosis.

So to be clear, the MAGA “America First” crowd is using a RUSSIAN propaganda outlet of some outlier case in PORTUGAL to try and … what? Cast doubt on tests that no one is claiming are 100% perfect in the first place?

3. “Don’t make me bake a cake for a gay wedding because church!”

When presented with false information, they just double down, acting as if confidence is enough to make it true.

1. Believing you have the right to control other people’s lives.

2. Believing you have the right to never hear other opinions.

3. Believing that when you’re offended others have to care.

4. Believing that there are two sets of rules: One for you, and one for everyone else.

Amazing how one single meme proves the projection we saw in that “liberal privilege” meme above.

Nothing says “amen” more than bragging about your lack of give-a-fuck and empathy for your fellow humans.

Their lack of self-awareness is breathtaking.

He could put his phone on “do not disturb” if this was his real gripe. He just didn’t like being reminded by health authorities, likely trying to inform him of available resources and doing contact tracing, that he had stupidly contracted COVID after all his anti-mask, COVID-denying bullshit.

Brutal. What a gut punch.

There is so much selfishness in the anti-vaxx world, but the effect a serious COVID illness has on family members is among the most brutal consequences. If you die, whatever. The anti-vaxxer made a stupid bet and lost. Whatever. But his or her family now needs to deal with the emotional damage. Kids are left without parents. Medical bills need to be paid, as well as mortgages and other expenses. Even if the anti-vaxxer survives, the missed work creates a big financial hole, and that’s assuming he or she can even return to work eventually. Long-haul COVID can make that impossible.

There is much more dignity in a free jab than in begging other people to bail you out of your stupidity.

I lost my father when I was 21. I have never gotten over the fact that he never got to meet my kids or my nieces. It breaks my heart every time I think about it.

He died of a glioblastoma—an aggressive brain tumor with zero survival rate. It’s the same tumor that killed Sen. John McCain. I can’t even being to imagine how much worse I would feel if he had died of an easily preventable disease. I just can’t. It’s too much to bear. What a waste.

Finally, a legitimate reason to add, “Can I get an amen?”

Kim Kardashian Reveals The ‘Mean’ Insults North Hurls At Her