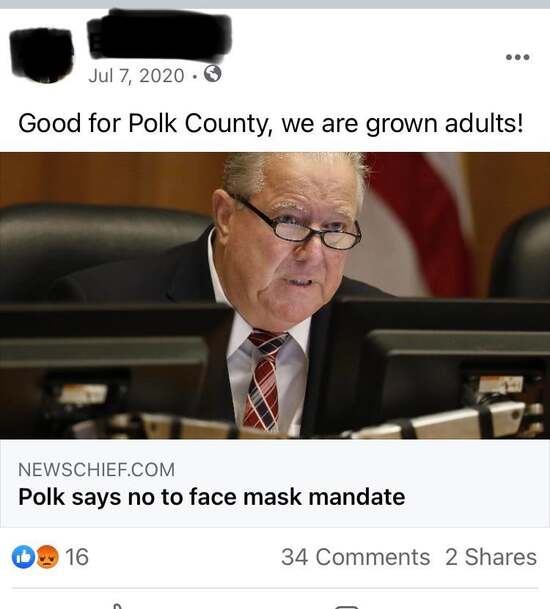 The idea that being a “grown adult” means disregarding a global pandemic that has killed millions is among the most unbelievable things to happen in my entire life.

Remember when people said “avoid it like the plague”? Yeah, now we know that’s bullshit. A good 30-40% of the country has zero interest in avoiding the plague.

Orange is a sweet, loving, caring person. If she’s a Christian, she follows the relevant tenets—love thy neighbor. Tells the store clerk that she’s wearing her mask to protect others.

Black has to stomp in and say “I” and “my” and make everything about himself, rather than his community and others in it.

And yes, you can still catch it even wearing a mask, but the equation isn’t 100% you can catch it, or 0% you can’t. You know this. Orange knew this. Too bad Black had zero interest in dealing with shades of probabilities.

I will never understand the sentiment that “COVID is like this other thing that has killed TENS OF THOUSANDS,” and the reaction isn’t “Oh shit, let’s mask up then!”

I looked up this story:

“We need to change our mindset and focus not exclusively on the number of cases, but on the severity of illness. We shouldn’t just be counting those who have a diagnosed infection,” Yealy said. “For the vast majority of people testing positive, their illness is mild, or they don’t even know they have any symptoms of COVID-19 infection.”

The was pre-delta. The notion being, “it’s okay if cases remain high as long as hospitalizations continue to decline.” Debatable, perhaps, but there was some logic to it. And get this, from the same press briefing:

Tami Minnier, UPMC’s chief quality officer, said “we need to stay vigilant. We need to be able to continue wearing our masks, wearing our masks appropriately, washing your hands frequently, using social distancing. Despite all of the points that Dr. Yealy made, that is our plan going forward for keeping all of us safe.”

OH BOY. That’s what happens when you share a link and project all your biases and assumptions without reading the full story.

The article didn’t say “quit masks because we’re too focused on the number of positive cases.” It said “hospitalizations are down, but let’s stay vigilant and continue with mitigation efforts.”

In any case, the delta variant hit, and hospitalizations no longer were on a downward trend. Quite the opposite, in fact. Unfortunately, Black wasn’t interested in information that contradicted his deeply held belief that “masks are bad.”

Remember when parents fought to protect their children from harm?

Seriously, what the fuck is wrong with these people. They want to carry disease?

Your vehicle’s exhaust system is designed to draw fumes from the front of the car to the back. The muffler filters these fumes into the atmosphere.

If there is a crack or hole in the muffler, the fumes can make their way to the interior of the vehicle. Exhaust fumes contain carbon monoxide and other highly hazardous chemicals and toxins. Over time, this can cause serious harm to you and your passengers.

So yes, call a mask a “face muffler” if you’d like, because either way, they do good things.

Ah, here is conservative projection at work. They think “the race card” is a get-out-of-jail-free card to relieve a person of color of all responsibility.

God bless that woman who tried to save Black’s life.

Mississippi now has the highest death toll in the entire country: 1 in every 332 Mississippians as of today has died of the disease. Texas is rapidly rising up the ranks  to 17th.

Neither state was anywhere near the top of the charts at the beginning of the pandemic, when the congested Northeast was hit hard.

They never realize that this applies to them.

THEY HAVE FOUR KIDS.

Not to sound like a broken record, but if some asshole wants to endanger himself, that’s bad enough. But when there are kids involved? Holy shit, I would do anything to protect my kids! These people don’t give two shits!

The party of “family values,” sure …

“I would rather take my chances,” he wrote to his friend upthread who spoke of wearing a mask to protect others.

Well, this is what losing that bet looks like. Dear god, what a nightmare.

And as a reminder—he is sedated because the tube jammed down his throat is so painful that he would try to rip it out if he could. This is torture.

And here, this is what that intubation looks like:

Fuck that. Where’s my face mask?

His best-case scenario is to be discharged with his trach still on, and long-term rehab.

I was going to add an image of what a tracheotomy looks like, but I’ll spare you the horror. It’s a breathing tube jammed into your throat. You can google it if you want, but even talking is difficult with it.

One solution is to use a speaking valve, which is an attachment that sits at the end of the tracheostomy tube and is designed to temporarily close every time you breathe out. This prevents the air leaking out of the tube and allows you to speak.

Just remember that the next time someone complains about difficulties breathing with a face mask.

“The flu has killed more people,” he said. Turns out COVID sucks more.

“I would rather take my chances” he wrote. It was all about me, me, me. Yet he had a whole family at home, including four children. And as much as they resort to that GoFundMe, there’s no way one of those will ever come close to replacing the income lost from a long hospitalization, rehab, or death.

The question should never have been “What are my chances of death?” It should’ve been “Do I want to risk putting my family in danger?”

And, being totally serious here, why isn’t that the nut of the pro-vaccination advertising efforts? There’s been too much “do it for your community” messaging, which clearly doesn’t work with conservatives. They are selfish assholes who didn’t give a shit about anyone else. But their families? Maybe. Try that and see if it works.

Imagine leaving your family so bereft that they can’t even pick up the dirty socks you thoughtlessly left on the floor.

Had he known that he’d leave his wife in this condition, would he have taken that vaccine after all? Would he have worn a mask?

I really want to know if they love their family enough to protect themselves, to rip them from that core selfishness which drives their actions.

Black is being tortured in the hospital. COVID tortures its victims. It’s grizzly and horrible and the family is left begging for help.

There was nothing peaceful about his passing. He showed his family that he left them behind because of avoidable, selfish behavior. He was more interested in getting in arguments with “Karens” about wearing a mask than in protecting himself and his family. His family is now begging for help as a result, dealing with both unimaginable grief and financial ruin. The taxpayers will inevitably foot a big chunk of that hospital bill, as well as public support for that large family. Four kids will now grow up without a father.

There are no winners here, and it’s all compounded by how avoidable it all was.