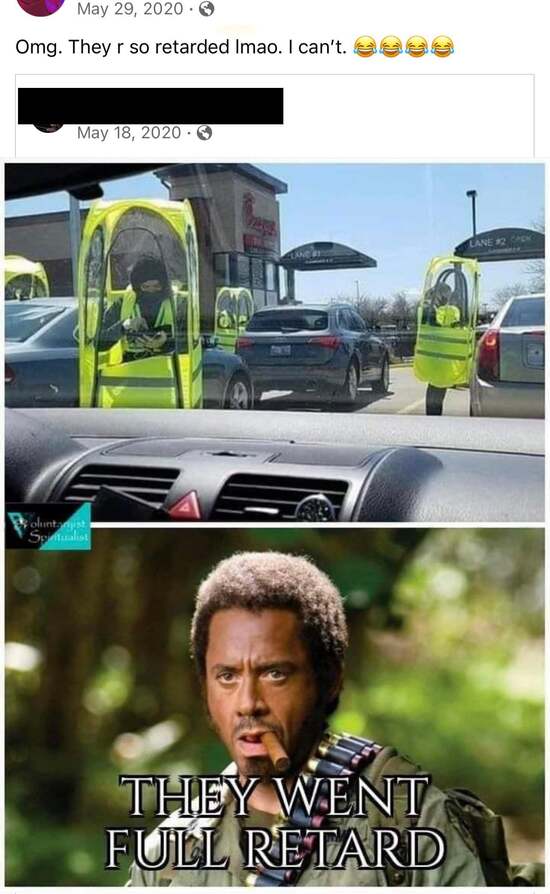 It really takes a conservative to use a slur against the mentally disabled to describe taking major precautions against a novel disease that few understood in those early months.

Cloth masks aren’t complete barriers to transmission, which is why 1) you require both parties to be masked (and you can’t mask the fires), and 2) you still maintain your distance and other mitigating efforts.

Furthermore, masks work by limiting the spread of saliva droplets carrying the virus. It’s the moisture that you’re somewhat blocking, not the virus itself. Not much moisture in smoke.

So no, not “the exact same thing.” Should be patently obvious.

4) Why is “this other thing also kills lots of people” an argument against vaccination and mask usage, as opposed to an argument for better precautions against the flu? Heck, reading that makes me extra sure to get the flu vaccine, despite its low efficacy, and to keep masking forever into the future when I’m in a crowded place with poor ventilation, like a subway car. Getting the flu is awful—why wouldn’t I want to minimize the chances of getting it?

Pre-COVID, I used to think that Asians who masked in public were odd. Turns out they were the wisest among us.

Can I explain that? The COVID-19 vaccines are between 67-92% effective, depending on the shot. So yes, some vaccinated people will get COVID-19.

But even more, it takes two weeks from the last shot to even have full level of immunity. So eight days was too soon; his chances were significantly higher of infection.

Even worse-worse, this nurse only had his first shot. Didn’t even get the second shot. That drops efficacy even further. As noted in the story I linked to, he might have even contracted COVID-19 before he got that shot. The point of that story wasn’t “vaccines don’t work.” It was “don’t think you’re immune after your first jab.”

“Can u explain that.” Of course, all that was explained. In that story. Which Yellow didn’t actually read, because the headline was all he needed to push his ignorant agenda.

In the zombie apocalypse, these COVID deniers would be the zombies, too stupid and stubborn to take the necessary precautions.

16 year olds work, pay taxes, and drive cars. Why shouldn’t they be able to vote? Once upon a time, you needed to be 21, but you could be drafted at 18. That was the justification.

But if you can work and pay taxes, you should be able to vote.

Incidentally, my kids, 12 and 16 at the start of the pandemic, made smarter decisions about keeping others safe than these asshats.

Wearing a mask is as relevant to the Constitution as wearing a shirt and shoes is relevant to entering a dining establishment. Or wearing pants in public. Or even laws allowing men to walk around shirtless, but not women.

QAnon is in da house!

Let’s logic this one out.

1) Prison inmates are in jail, so they can only “stop pedophilia” inside prison. No one gets day passes to hunt down pedophiles outside prison walls.

2) Everyone in prison is there because the government put them there.

4) So how did the prison inmates do “more” than the government?

Let’s logic this one out too.

3) Good luck using that gun to keep yourself safe from COVID-10.

Yes. COVID-19 sucks. That’s what us “sheep” have been trying to say. It’s horrible and painful, especially if you’re not vaccinated.

Yellow’s wife is understandably upset that her husband is in the hospital dying of COVID-19. But to blame the vaccinated?
They think they’re clever when they post memes about “a disease you need to test for to even know you have it.” Yes, COVID-19 is tricksy that way, able to be spread by asymptomatic individuals. The way to mitigate that risk? VACCINATE YOURSELF.

Even if he did catch it from someone vaccinated, odds are good that original person isn’t in the ICU hooked up to all manners of machines. That vaccinated person also won’t face thousands in medical bills, or suffer potential long-term ill effects of the infection if he makes it out of this alive!

If this guy (and his wife, since she also got it) refuse to vaccinate, then maybe wear a mask to protect from asymptomatic transmission. That might work better than posting that stupid fence gate meme. Science certainly thinks so. I promise, that mask would amazingly work better than a gun.

He didn’t even get a chance to fire rounds at the COVID-19 virus invading his lungs! They snuck in, all ninja, when he wasn’t looking.

Had he done all that rather than spread disinformation, he wouldn’t be posting about the awful pain he’s in and coughing up blood oh my god.