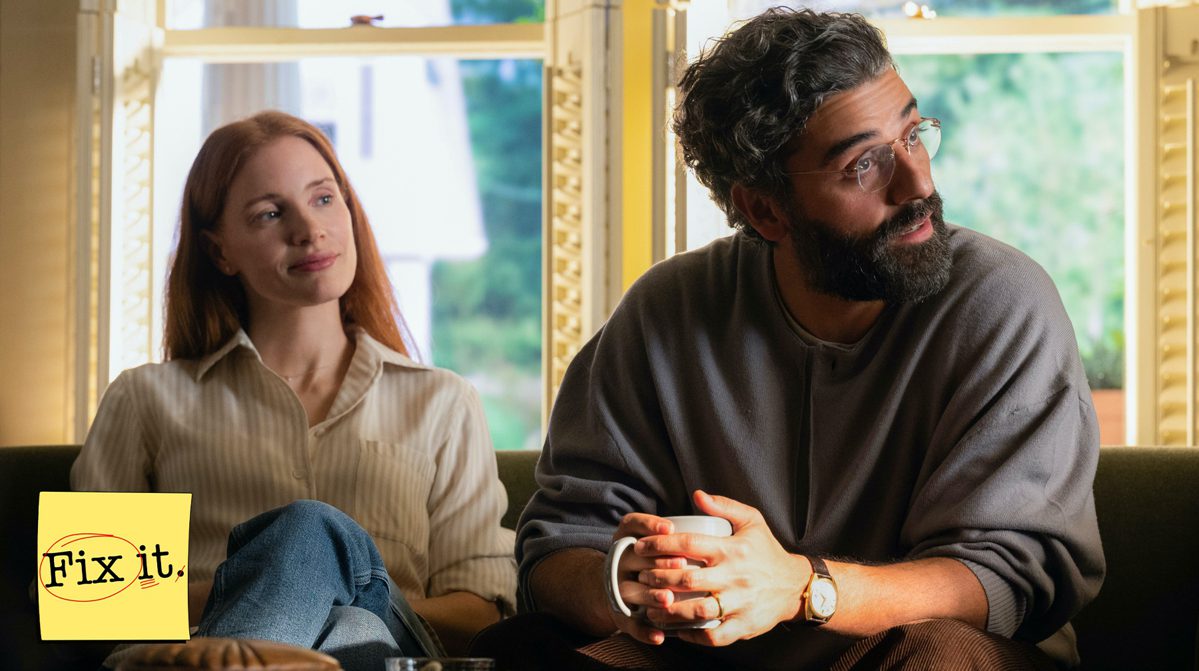 Welcome to Fix It, our series examining projects we love — save for one tiny change we wish we could make.

HBO’s Scenes from a Marriage opens on a set. The camera tracks Jessica Chastain — not her character, Mira, but Chastain herself as she arrives to shoot this show. A crew member refers to her as Jess and asks about lunch. Other members of production walk in and out of frame, take her coat, touch up her makeup. Everyone besides Chastain is masked, following Hollywood’s COVID-19 safety protocols. Once Chastain is settled, a voice calls action, and Scenes from a Marriage begins.

It’s always fascinating to watch a Hollywood crew at work — especially with recent headlines about IATSE and the invaluable labor behind the scenes — but Scenes from a Marriage may be one of the last projects to need this kind of gimmick folded into its runtime. The five-episode limited series from Hagai Levi is a sumptuous performance piece for stars Chastain and Oscar Isaac, not to mention an almighty showcase for Levi’s writing and direction. This meta-layer takes away from all of that and arguably disrespects the production it seems to highlight. The best film crews’ work is seamless and undetected, knowable in awards and accolades and a damn good piece of work.

I haven’t seen Ingmar Bergman’s original Swedish Scenes from a Marriage, but a quick check (it’s also on HBO Max) confirmed that it does not open with such a self-important setup. It is a story about a couple and their crumbling relationship over the years, not A-list teeing up for Emmys and occasionally letting us plebes glimpse how the sausage gets made. The saddest part of this is how truly fantastic Chastain and Isaac are throughout the series. Yes, these are the kind of performances that win statues, but on their own they feel like tributes to real people all over the world, not Actors Acting. When Scenes from a Marriage cuts to life on set, it’s a reminder that these are, in fact, Actors Acting, a disservice to their hard work as well.

The only reason for doing this, it would seem, is to add another layer of meaning to the titular scenes; here is how Hollywood sets a scene, what that word means to Levi and the cast and crew. The added significance is redundant when Scenes from a Marriage already represents so much. These are vignettes in the couple’s life, chapters the audience witnesses without much additional context. They are often scenes with the more embarrassing connotation; “Don’t cause a scene,” one might say to Mira or Jonathan as their voices and emotions rise. A scene can be a location, like the house where they built a life together, or a specific kind of incident — scenes of anger, love, intimacy, and heartbreak. We do not need the cinematic meaning piled needlessly on top of that.

The fifth and final Scenes from a Marriage episode aired on Sunday, bringing this tawdry device back for a final time — this time at the end of an episode. After the last scene of Mira and Jonathan, they are left unceremoniously in the bed on set. Jessica Chastain and Oscar Isaac exit, arms around each other with familiar warm gazes, two actors once more as they tread back to their starry dressing rooms. The last frame of Scenes from a Marriage is of the Chastain and Isaac nameplates, leaving us on the disturbing parting note that this was all about them all along.

Scenes from a Marriage is now streaming on HBO Max.