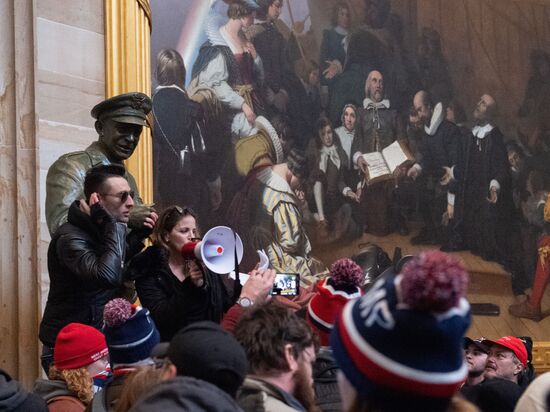 According to The Intercept, there’s a nice “network” of health care providers who have made millions on ivermectin and hydroxychloroquine during the pandemic. Do you remember the right-wing conspiracy theory-laden group of white medical uniform-wearing folks who called themselves America’s Frontline Doctors (AFLDS)? They promoted hydroxychloroquine as a miracle answer to COVID-19, and were able to get Republicans like Ohio Gov. Mike DeWine to reverse course on hydroxychloroquine bans. Guess what The Intercept found?

America’s Frontline Doctors, a right-wing group founded last year to promote pro-Trump doctors during the coronavirus pandemic, is working in tandem with a small network of health care companies to sow distrust in the Covid-19 vaccine, dupe tens of thousands of people into seeking ineffective treatments for the disease, and then sell consultations and millions of dollars’ worth of those medications. The data indicate patients spent at least $15 million — and potentially much more — on consultations and medications combined.

The AFLDS got its foothold after disgraced person Donald Trump retweeted a batshit ridiculous video of one doctor, Stella Immanuel, saying things like, “You don’t need masks, there is a cure … You don’t need people to be locked down. All you fake doctors out there that tell me, ‘Yeah. I want a double blinded study.’ I just tell you, quit sounding like a computer, double blinded, double blinded. I don’t know whether your chips are malfunctioning, but I’m a real doctor … we have neurosurgeons, like Sanjay Gupta saying, ‘Yeah, it doesn’t work and it causes heart disease.’ Let me ask you Dr. Sanjay Gupta. Hear me. Have you ever seen a COVID patient?”

Another prominent AFLDS person you might recognize is its founder, Simone Gold. The doctor and lawyer who helped get AFLDS off the ground was also known for telling the world in a May 2020 video: “We’re all acting as though there’s a huge medical crisis. I’m not sure that it’s front-page news.” Instead, Gold told viewers that “constitutional rights” being “trampled on” were the real issue. Now, Gold is better known for her more recent appearance as an insurrectionist on Jan. 6, 2021. Gold—who spoke into a bullhorn after trespassing into the Capitol building rotunda—is now facing five counts for her part in the insurrection.

But as The Intercept discovered, the AFLDS wasn’t just saying awfully misleading and incorrect things into microphones, they were the propaganda wing of a nice money-making medical network. The network included telemedicine company SpeakWithAnMD.com, medical consultation platform CadenceHealth.us, and online pharmacy Ravkoo. They way it works is that AFLDS refers its followers to SpeakWithAnMD.com, which uses the Cadence Health and Ravkoo platforms to offer up $90 phone “consultations” with doctors who have supposedly been trained by the AFLDS to prescribe you drugs like hydroxychloroquine and ivermectin.

But besides profiting off of misinformation and bad science and putting millions of people’s lives at risk, these scammers couldn’t even find the decency to go through with the farce they were creating. TIME reported on how people like “Mike,” seemingly suffering from COVID-19 and too frightened to go to the hospital, spent his $90 and got … zilch.

A week later, he was still anxiously waiting for the consultation. Calls and emails to AFLD went unreturned, he says. Finally, he called his bank to report a fraudulent charge. “Not even an apology,” Mike, whom TIME is referring to using a pseudonym because of his concerns about his job, told TIME in an interview. “This is absolutely nuts. This organization is not helping anyone but their pocketbooks.”

Reportedly, Mike’s story is one of many that have made the community that has been following quack doctors and self-appointed pseudoscientists wonder if they’ve been had. (Spoiler alert: They have been had.) TIME did an investigation that showed many of these poor folks find themselves ponying up $90 bucks with nothing to show for it. Others—having been told how the government doesn’t want you to know about ivermectin and COVID-19 because it’s so cheap compared to a free vaccine—were referred to online pharmacies “that quoted excessive prices of up to $700 for the cheap medication.”

“My mom has now been admitted to the hospital with Covid,” one user wrote Aug. 12 on the group’s channel on the messaging app Telegram. “AFLDS has not returned a call or message to her and they’ve taken over $500 out of her account!”

And if you do get that consultation, a lot of times you get the opportunity to pony up another $59.99 for a follow-up consultation. At The Intercept, some of the files they obtained came from “hackers” who easily got into the online platforms. The files they obtained show that between July 16 and Sept. 12, 2021 alone, Cadence Health got at least 281,000 patients signed up—“90 percent of whom were referred from America’s Frontline Doctors.” Guess how much “phone consultation” money was pulled in over those 62 days? About $6.7 million. When they confronted Cadence Health’s Roque Espinal-Valdez, he told The Intercept he was “flabbergasted,” and that he and his family were vaccinated and were shutting the platform down because he didn’t want to profit off of “quackery.” According to Espinal-Valdez, when he found out what was happening, he ended up attending an “emergency meeting” via Zoom that included SpeakWithAnMD’s parent company, Encore Telemedicine, and its 16 lawyers. He says he told them he was ending the contract and he signed off.

As for online pharmacy Ravkoo, which TIME describes as “a digital pharmacy in Auburndale, Florida, whose address listed online appears to be a dilapidated white structure by a strip mall,” The Intercept was able to see records for 340,000 prescriptions between November 2020 and September of this year. The results include “an estimated $8.5 million in drug costs.” And to be clear, in this context, this is snake-oil money. “Forty-six percent of the prescriptions are for hydroxychloroquine or ivermectin, and another 30 percent are for zinc or azithromycin, two other ineffective medications that the SpeakWithAnMD physicians, who America’s Frontline Doctors claims it trains, prescribe in their Covid-19 consultations.”

Ravkoo says they don’t know nothing about nothing and have cut ties with AFLDS, though it seems the tie-cutting took place super duper recently—like right after they found out hacked files had been given to reporters detailing their business making money off of misery.

And let’s be crystal on this point: They know what they’re doing.

At least one of the prescribers is aware that medical experts recommend against using these drugs to prevent or treat Covid-19 but prescribed them anyway, according to patient records. One physician included this disclaimer in their consultation notes with several patients: “I, [physician’s name], have a complete understanding of the recent release from the WHO, FDA, CDC, and NIH on March 5th, 2021 as it pertains to the use and prescribing of Hydroxychloroquine and Ivermectin. I understand that these two medications have been deemed ‘Highly Not Recommended’ by the for-mentioned [sic] medical governing bodies but are not illegal to prescribe. … I have explained that I will not be held legally or medically responsible for an adverse reaction by this patient should they choose to take them and have explained they will not be able to hold me medically neglectful, pursue any form of malpractice, nor any criminal and civilly [sic] suits.”