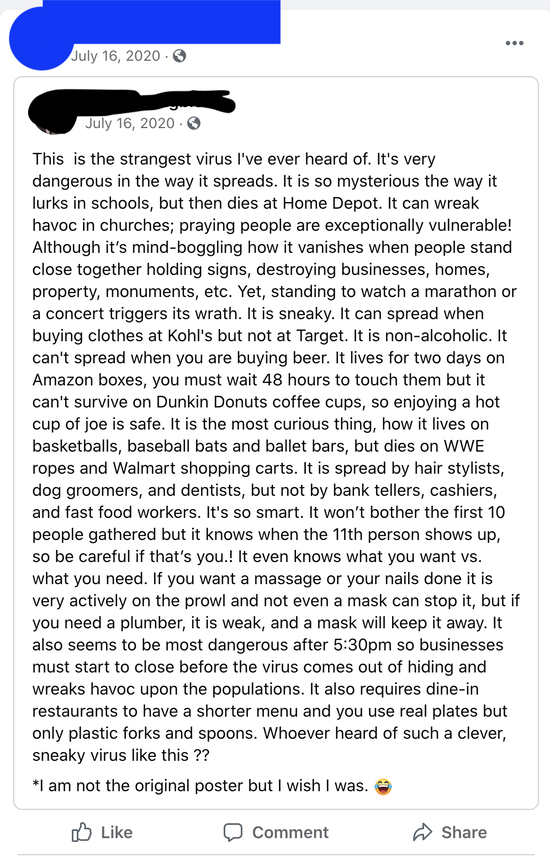 As a society, we had to make tough decisions from the very start—how to protect ourselves while maintaining a functioning society.

Imagine assholes like this one taking those difficult compromises and using them as fuel to dismiss the severity and danger of the pandemic.

So many generations get tested with real challenges. People around the world face war, famine, genocide, and other horrors. Our challenge merely required wearing a simple mask to mitigate the disease’s worst impact, and these jerks couldn’t manage. Just imagine if they had to face real hardships.

Oh no, people are being warned not to host Thanksgiving dinner for a year! Well, we’ll show that stupid CDC and ignore them ha ha ha ha ha.

That big-ass third-wave peak? That was post-Thanksgiving.

I truly hope that turkey was really worth having thousands of grandmas and grandpas and moms and dads die.

It’s not god’s fault he’s infected. It’s because he was a wacky sloth and refused to wear a mask or take other precautionary measures.

If there’s a god, she’s rolling her eyes at this.

Purple is his wife.

Yup, there are kids involved. Four of them, in fact.

I really wish these prayer warrior fundamentalists would simply decide that the vaccine was Jesus’ way, that it was his “divine hand” or whatever that guided the scientists who developed it, starting with the mRNA work decades ago. So much would be different right now. Instead, thanks to Donald Trump and Qanon and all that craziness, they made the wrong bet. And it’s killing them.

So many family members think that spare lungs are just lying around for the taking, and that even if they were, they’d go to someone who willingly damaged his lungs. It would be like doing a liver transplant on an alcoholic. Choices were made, and ascribing the consequences to a higher power does not absolve one of fault. Personal responsibility still exists. And Blue didn’t just refuse to take the necessary precautions, he bragged about it on social media, encouraging others to similarly put themselves at risk. These are the consequences—shredded lungs and a bereft family.

Four weeks in a hospital, gasping for air, likely sedated most of the time, lest the pain be overwhelming.

All of it likely avoidable.

But that’s not the worst of it. I bet that every single one of these victims wish they could’ve protected their families from the pain and hardship of their loss. That’s what all of their “it’s my body” bullshit misses. This isn’t just about them. They don’t live on a deserted island, where their passing wouldn’t impact a soul. Their death is a dagger to their families—both emotionally and economically.

Blue left behind four children. Four kids without a dad. And a family without a second wage-earner. No GoFundMe efforts will plug that gaping gap in their finances. How will they even pay his medical bills?

Was laughing at mask mandates really worth the hell he’s gifted his family? Was leaving his kids without a father really worth avoiding the jab because he didn’t know “what’s in it” or whatever other asinine excuse?

Blue’s friend wrote the hashtag “#Godhasaplan,” as if things were out of his control and he was but a helpless pawn in some cosmic drama.  But Blue had choices. And the ones he took will have consequences long into the future.